By Jove, I Saw Ganymede!

Last Saturday, I was looking out the window at the full moon and noticed another unusually bright celestial object near it. Curious what it might be, I dashed to the computer to fire up Stellarium, the quickest way to identify objects in the night sky. It turned out that the bright object I was seeing was the friendly neighborhood giant, Jupiter. I grabbed my binoculars to look more closely. Once properly focused, I could just barely make out some little specks of light nearby, background stars, I presumed. Of course, I was unaware that I was making the same assumption that Galileo had made 398 years ago. Back at the computer, I zoomed in to see what the background stars were (Galileo would have liked Stellarium). It turns out that I was seeing three of the 63 Jovian moons. It was pretty thrilling to be seeing such an important detail of our solar system with just my weak little binoculars. I wouldn't be surprised if the magnification I was using was pretty similar to that old Double-G was looking through so many years before. Very, very cool. I tried, of course, dear readers, to capture what I was seeing using my DIY Telephoto Lens, but alas, I could not hold the cardboard keyboard box propped up on the sofa cushions on top of two stacked bar stools quite still enough. So all I've got is a shot of the moon from that same night and a pretty poor video I made of zooming in on the gas giant, as it was that night, in Stellarium. 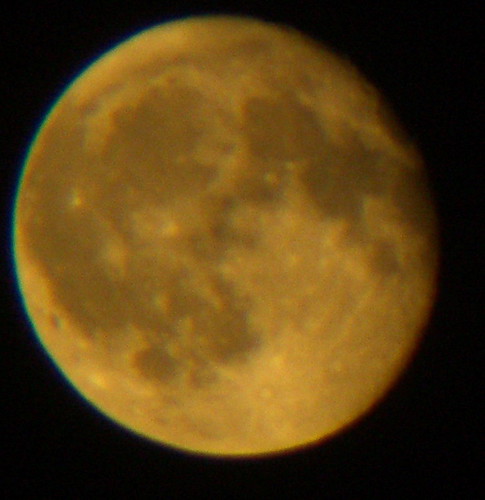