On Monday, May 12, Marga sprained her ankle. She went to the gym, for the first time in May, paid her entire May subscription fee, and half way through her aerobics class, she sprained her ankle. Somehow, she managed to jump up and land with her right foot on top of her left, thus twisting the right foot so that the outside part of the foot hit the floor. She heard a loud crack! and screamed out in pain.

She hopped back home, stood in the doorway, and yelled for me to get the car keys and take her to the emergency room. The emergency room doctors didn't do much but wrap it up in a bandage and tell her not to walk on it. Duh.

A couple days later, I knocked on our neighbor's door. The guy that lives in the apartment next door, I had learned from one of the nosy old ladies in the building, works as a massage therapist (masajista) in Laredo. It turns out that he was exactly the person Marga's foot needed. He poked, prodded, asked specific questions about where it hurts and during what movement. After about five minutes of examination, he explained exactly what had happened, what to expect as far as pain and bruising, etc. It's so nice to see an expert in a field that you have no clue about being so confident in his element. He said that if the pain didn't go away after a week or so, then there could be more serious damage, like a broken tendon.

Two weeks later, that turns out to be the case. She can now walk a bit and drive herself to work (thank god!), but she's still in a lot of pain. Marga went to the doctor and has been referred to radiology sometime soon.

About this time, Marga, who rarely ever mentions anything that I write about on this blog, said to me, "What? My foot doesn't deserve a blog entry?!" The truth is that it did deserve an entry to reach the point we have now. Because what I really want to write about is what follows. 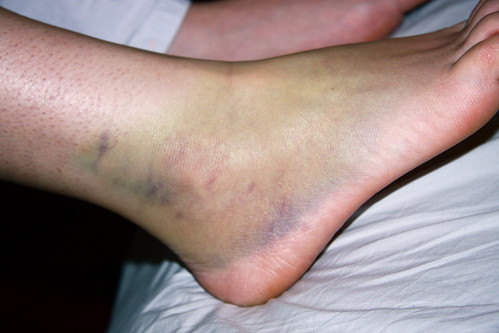 We had been told that there was a really good masajista in a little town with the funny name of Apatamonasterio that we drive through unknowingly every time we go to my in-laws' house in Mondragon. On Saturday morning, we headed towards Mondragon with the intention of stopping in Apatamonasterio. We didn't have an appointment or know where this guy's office was or what his working hours were on Saturdays.

We stopped in the town and asked some bar hoppers where the masajista was. They immediately knew who we were referring to and directed us where to park. Once parked, we asked another passerby where his office was:

Us: "Where's the masajista's office?"

Passerby A: "It's that door over there. But he's probably in the bar around the corner."

Passerby B [walking from the bar]: "No, I was just in there. He's not there. He was about 15 minutes ago, though. I'd try either of those two bars over there. But he lives in that house over there, so maybe you can ring the doorbell. He won't be there at this time, though."

We headed for one of the two bars. Marga was too embarrassed/self-conscious to ask for the massage guy, so I went up to the bar and ordered a couple of small beers and asked.

Bartender: "Masajista? Yeah, he was just here. Hold on."

The bartender proceeded to pull out a cell phone and call the man we were looking for. He told us that he'd be right over, but that we should wait for about 15 minutes or so. At this point I was getting a little freaked out by the helpfulness of this little town in finding this man. Only later would I conclude that a large majority of his clients probably go through this procedure.

Eventually a 60-year-old man came in and the bartender pointed him out to us. I gulped down the remainder of my second beer and went to meet him. He said, "Hola," and sauntered up to a bar stool, took a seat, lit a cigarette, and ordered a big cocktail. I put some money on the bar for his drink as common courtesy since we had clearly interrupted him after his office hours, and he chatted mumblingly with us for a bit about anything except which one of us was injured and needed his help. A friend of his came in and my money ended up buying him a drink as well. Eventually he walked us out of the bar and towards his practice. As we walked, Marga said to me, in English, "I'm a little concerned about this man, who is clearly drunk, touching my foot."

We made it to his office, and he turned to Marga and said...

Masajista: "Okay, take your top off."

Marga: "But it's my ankle that's sprained."Masajista: "I know. Take your top off."

Marga [with her jacket and scarf thing off now]: "Like this?"

Marga [taking off her shirt, disbelievingly]: "Bra too?"

Masajista: [as if offended] "No, of course not. Lie down on the table, face down."

He called me over to examine her boots. He explained that she was lying down perfectly straight, and that the heels of her boots were not even. Sure enough, there was about a half centimeter difference in the apparent length of her legs. He felt down her spine a bit, went to the side a couple centimeters, placed his elbow on her back, and brought down almost all his weight on his elbow. A big CRACK! Marga gasped, but was clearly not in pain for more than a second. He proceeded to do some other maneuvers with her on her side, twisting her back. More cracks and pops and gasps. I didn't know what to make of any of this, of course.

He told her to lie down on her stomach again and he demonstrated to me that her legs were now the same length. Sure enough, he'd definitely realigned some part of her body that was previously misaligned. This could have been a parlor trick, but I'm inclined to think that it wasn't. As Marga was donning her top again, he pulled out a 50+ year old text book and showed us how the nerves from the lower vertebrae run directly down to the ankle. We asked how much we owed him, and he said 30€. After we paid him, he brought out several bags full of cosmetic products, clearly gifts from pharmaceutical companies that he had no need for, and told Marga to take as much as she wanted.

We left his office and he invited us up to the bar next door for a drink. As he was mumbling away about some local restaurants we should try, I was noticing some bizarre blood vessel formations on his nose and cheeks. Marga later told me that those are a symptom of heavy alcoholism. We finished our drinks and headed on our way, our minds reeling at the strangeness of our morning experience.

First of all, the man we visited was not a "massage therapist", but what we, in English, call a chiropractor. Although perhaps those terms are blurred even in English. In my opinion, the vast majority of chiropractors are frauds. Most of them claim to be able to fix health problems using techniques that have never been proven scientifically. Marga went to one in Colindres before her accident that she described as "a big show": lots of nerve-tingling creams and showy ointments.

However, neither Marga nor I regret having visited and paid this man. There was no show to his act. He did what he did with no flare, going directly to the bones and muscles that needed attention, in his professional opinion. He clearly doesn't advertise or care that his office is a mess. People come to him via word of mouth because he actually cures people. In fact, my back and shoulders have been hurting more since watching him tune up Marga's back because I'm more aware of how misaligned I probably am. We might have to stop by there again sometime soon so I can get my vertebrae fondled too.

But the problems he solved were completely unrelated to the problem we needed fixed. I have no doubt that, for someone who started having ankle pains for no apparent reason, his procedures would help a lot and probably fix the problem entirely. But that's not Marga's case. She had a specific injury event that probably broke a tendon in her foot. The problem is that this chiropractor has had a career of fixing problems that conventional medical doctors could not, and has developed such a know-it-all hubris about his skills that he dismisses important information like what actually happened to her foot as meaningless. His philosophy is that "As long as your spine is in harmony, the rest of your body will be healthy." Well, I'm sorry, but if I break your kneecaps, it doesn't matter how beautifully aligned your spine is.