My Neighborhood in Miniature

It won't surprise my regular readers to learn that, as soon as I learned about tilt-shift photographic effect, I immediately set about thinking of how to make a tilt-shift timelapse movie. It would be nice, of course, to be able to set up a webcam in Times Square and tilt-shift that, but, alas, I live in a small town in Spain, and I only have one street that I can look down on at an appropriate angle. But the sun was out yesterday, so I set up my camera on top of two stacked bar stools (I don't have a tripod yet) pointing down at the street outside my house. My camera took a picture every 15 seconds for two hours and seventeen minutes, resulting in 548 RAW files. I optimized the exposure settings and loaded them all into photoshop, 100 at a time, sized them down to 800x600, ran a batch tilt-shift action on them, and saved them as jpegs. Then I loaded them into Quicktime as an image sequence, saved it as a movie and put some titles and music with iMovie. And voila! Things to watch for:

I actually learned about this tilt-shifting stuff from a timelapse video on Flickr. I've also done a tilt-shift on one of my favorite photos on Flickr. It's a shame that I didn't remember it for the last post, because it's absolutely perfect for this visual effect. 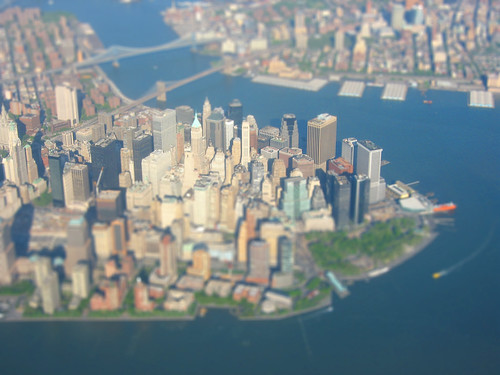