Every once in a while a computer application comes along that ends up saving you hours and hours of time over the period you are using it. For the Mac, a good example of this might be Quicksilver. For a developer, it's an IDE that does extensive refactoring for you. I do believe that I have found a new application that fits into this category: Jing Project. If you are at all knowledgeable about computers, you will attract less knowledgeable people to you like flies on, um, knowledge. Not that they necessarily want to be your friend, but that, when they have a problem, they go to someone who they think can help. If you are one of these people that gets asked how to do things a lot, you will have spoken or typed the following words, or their equivalents, thousands of times:

This type of communication is difficult and often just does not work. The wish that Jing Project answers is, "Wouldn't it be nice if I could just SHOW you how to do it?" Go to their website and watch the video tour.

Wait! I just gave textual instructions about how to do something on a computer. That's what Jing is for! 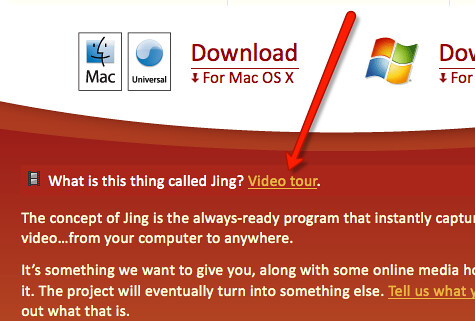 This image was captured, edited, and uploaded to Flickr in about 5 seconds using Jing.

Jing Project is a screencasting application that lets you record images, or video of your screen with voiceover and then send it instantly to a server and provide a link for you to share.

I can feel that I'm going to be using this application almost every day. Both for showing people how to do things and, almost more importantly to me, for other people to show me what they have done to reproduce a bug in one of my applications. A huge bane for developers is when a user says, "X doesn't work," and provides no additional information as to just how X is broken. Users are often not willing to write down a list of "first I clicked on this, and then I got error message ____, and then I clicked on that" steps that they took to cause an error. With Jing Project, that's going to be easy for them and easy for me to see exactly what went wrong.

If you have ever been frustrated while trying to explain or comprehend a sequence of actions on a computer, and I expect that includes everyone that has ever used a computer, then Jing Project is for you.

I'd like to send a huge THANK YOU to the people over at Jing Project. You guys rock!