Last Sunday, my inlaws, wife, and I climbed a mountain peak that we can see from our house: El Pico de las Nieves. According to the info panel, there has been some sort of church on the mountain dedicated to the cult of the Virgin of the Snow since 1356. The peak is 778 meters above sea level. The tiny little chapel is clearly visible from my window in Colindres. The church there is called the Ermita de las Nieves. Ever since learning about this church, I've wanted to take my camera up there on a clear day and take panoramic pictures. Sunday was that day. First, these are two photos I've taken of the mountain from my house.

Sunrise over the hermitage.

My local butcher, Bruno, had given me instructions about how to get there, but I wanted to double check. So I opened Google Earth and zoomed in on my house. I set the viewing angle to ground level and spun around until I could see Pico de las Nieves on the horizon. I double clicked on it, and Google Earth zoomed me right there. Once I had it located, it was easy to verify the instructions I'd been given.

The view from my house in Google Earth.

The road there was long and winding, but eventually we could see the mountain peak towering above us. It was unclear where to park, so, after we passed a few parked cars, we found a place to pull over. The temperature was about 9 degrees colder up there and the wind was ferocious. I grabbed my new expensive camera, the main reason I wanted to be there, and we set out looking for a way to climb up. About a hundred meters from the car, the beauty overwhelmed me, and I pulled out the camera, aimed it towards the rocky cliff, and pressed the shutter. I looked down at the preview screen to see my wonderful creation, and what do I see? "NO CF CARD!" Oh no!! I'd accidentally left my compact flash memory card in my computer back home!! My elegant camera and all the expensive optics were rendered useless because I had nothing to store the photos on. Ugh!

I wasn't about to lug that thing up the mountain, so I ran back to the car to leave the camera. Upon my return, I found Juan, Marce, and Marga billygoating their way up the mountain, climbing from rock to rock. I caught up to Marga, who was carrying the napsack, said a little prayer that my vague memory was true, and reached into the bag. Yes! Before leaving home, I had thrown my old Casio point-n-shoot camera into the backpack just in case there was something worth taking a video of along the way. I was saved!!! I had a camera after all!

It was pretty hard going up the hill. There was one spot where we had to balance on some rocks with 4-5 meter crevices on either side. The crevices were only about 50 cm wide. If you fell down in there, you'd probably break your arm and get jammed down in there pretty good, but you wouldn't die. You'd just be cold and in agony for the 5 hours it would take to get a rescue team to you. Plenty to get my body into natural fear mode: sweating, pulse racing, etc. Eventually, we got up to a grassy area and found a guy with a long walking stick and an old dog. He looked like he probably walked on that mountain every week, if not every day. We asked him if there was a better way up and he chuckled and said that we parked on the completely wrong side of the mountain and that there's a nice easy path up the mountain on the other side. So we did our best to walk around the mountain, without going up or down much until we found the trail. Once we found it, we felt like idiots for parking where we had. Oops. At least no one got hurt because of our bad decision.

And now for the pictures.... 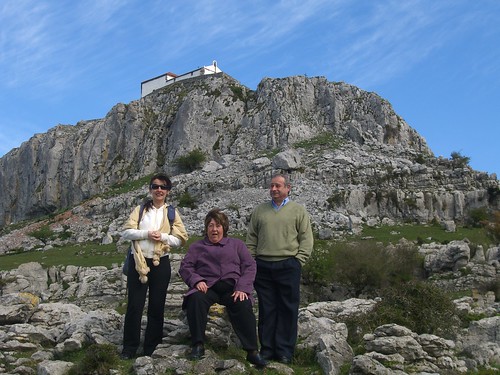 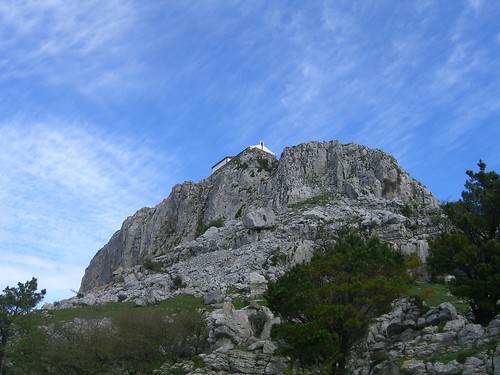 Yeah, there must be an easier way up.

Some snowy mountains we could see in the distance. A woman that we met at the summit told us that the structure on the top of the middle mountain (click through to see a Flickr note) is a telescope from some space observatory. Cool. 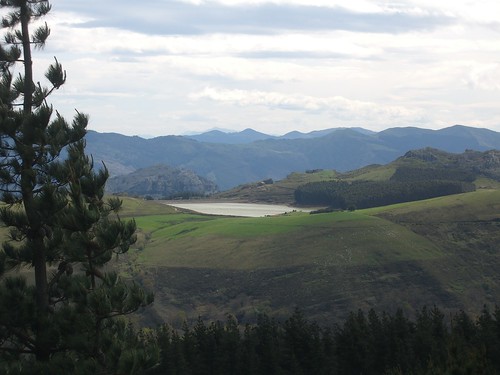 A mountain lake we saw on our way up. 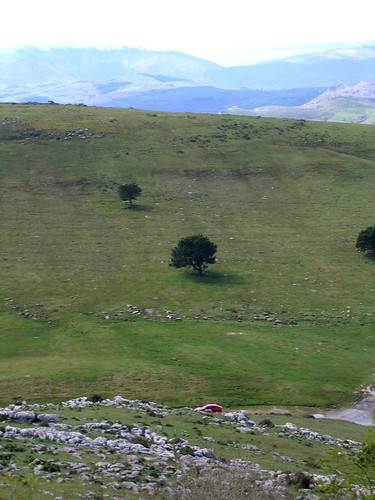 Looking back down at the car. 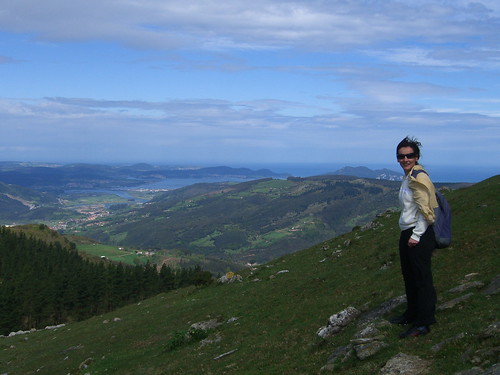 Marga looking down at Colindres. She carried the backpack the whole way up and down, but I loaded it into the car once we got back. I'm a gentleman like that. 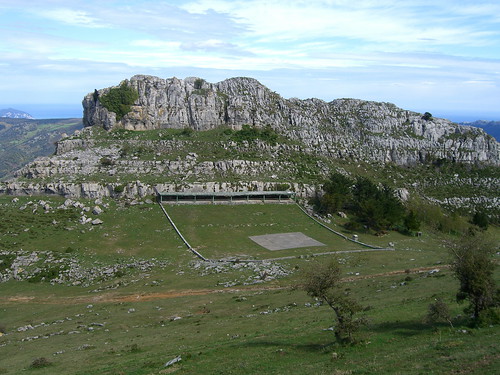 I could not, for the life of me, figure out what the heck this structure was about. My first guess was a helipad, but that doesn't make any sense. The covered area is clearly for people who are watching, or doing something to, whatever is in the open grassy area. My best guess is that it is some kind of shooting range. I have no idea why it would be way up there. 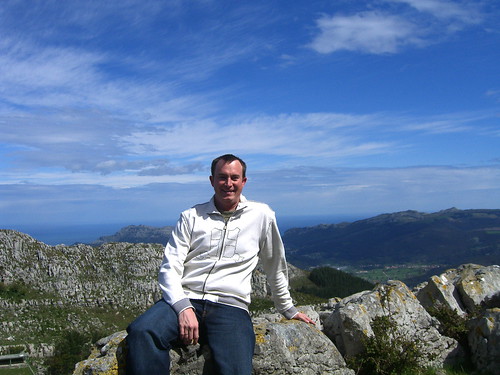 I felt like the King of Cantabria up there. 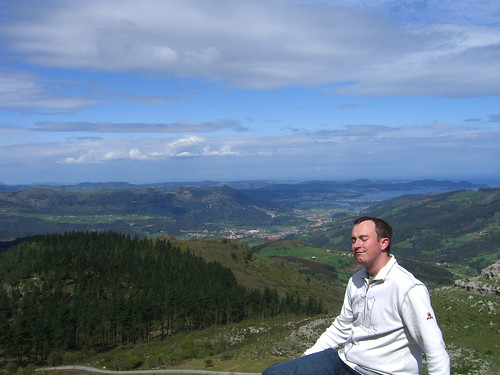 Basking in the sun with Colindres above my head and Pico Candiano to the left (click through for notes). 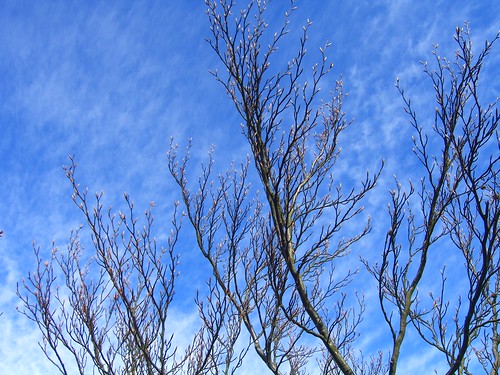 Spring has even arrived up here...slowly. There are definitely young buds on this tree. 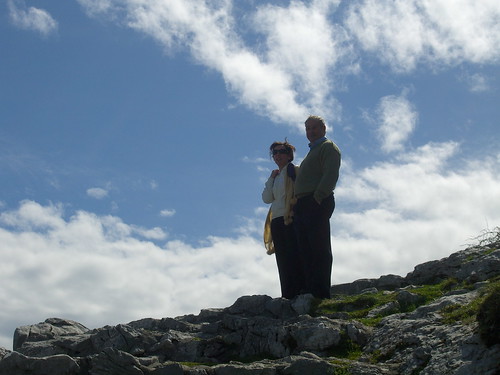 Juan and Marga surveying the view. 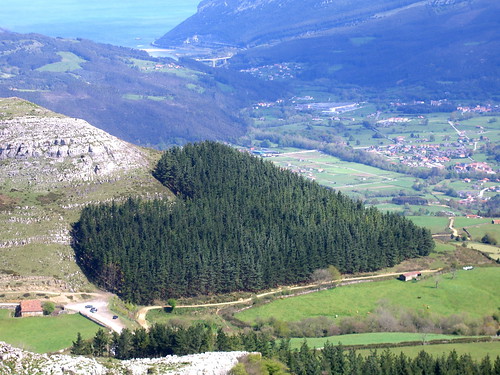 Marga said, "Look! It's a heart-shaped forest!" I quickly jumped in with a, "I'm glad you saw that. I planted that for you since today is our 6-month anniversary. I was worried that I would have to point it out to you, but you saw it on your own." She smiled. 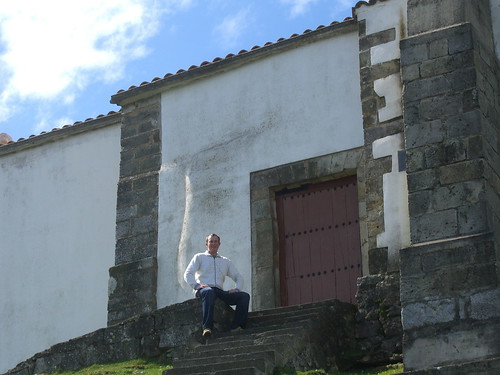 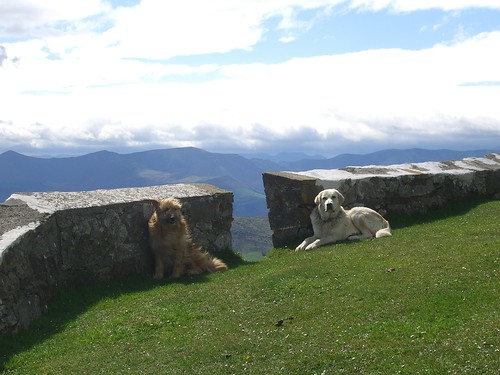 When we got to the top, the wind was enough to keep you huddled towards the ground for fear of being whisked away. On the sunny leeward side of the church, we found a group of middle-aged hikers resting against the church. Their dogs had also found shelter from the wind. 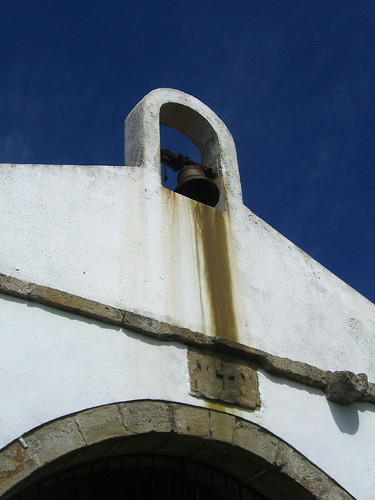 I presume this stain is rust that has washed off the bell and stained the side of the church. 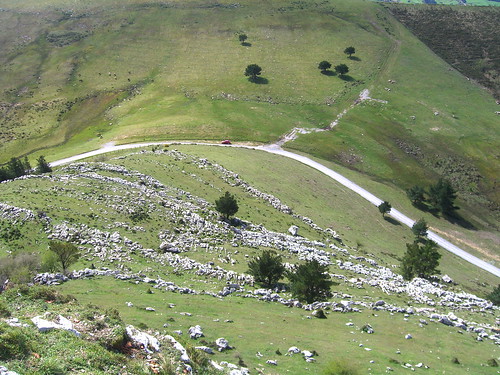 Look at the car waaaay down there. It's a good thing we didn't come directly up that way. 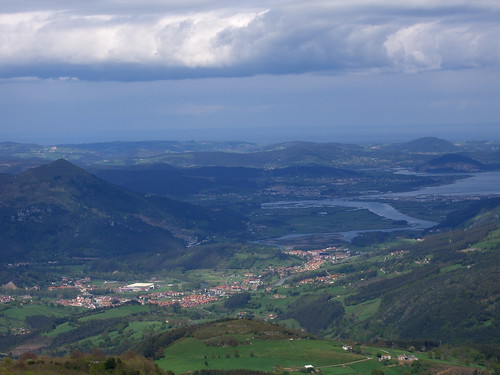 Looking down to Colindres and Pico Candiano (click through for Flickr notes). We hiked to the top of Pico Candiano last year and thought we were really high up. Looks like just a little ant hill from up on Pico de las Nieves.

A full panorama from the side of the church. View larger. 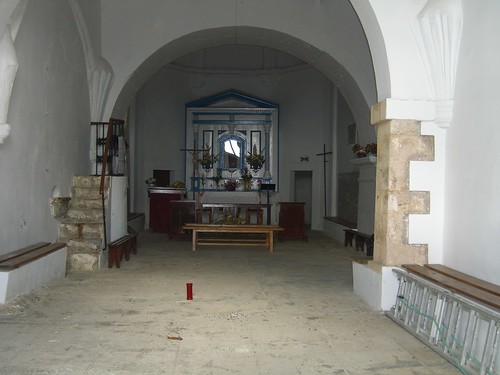 The church was gated closed, but there was just enough of a hole to fit my camera and its flash through. I'm not sure what this church is for. Do people attend a regular mass up there? Just special ceremonies on special dates? Could you get married up there? I don't get it. I understand that "hermitage" implies that someone would live up there, but where? Is there an upstairs bedroom where the hermit sleeps and then he/she spends every day praying at the altar? What about food? Does someone bring it for them? Color me confused. 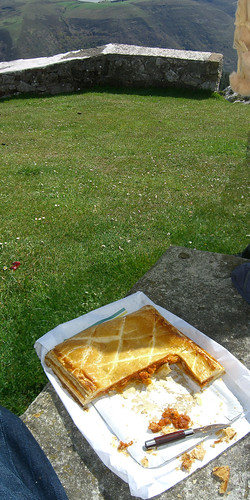 Remember that empanadawe bought on Saturday morning? It really hit the spot at the top of that mountain on Sunday. 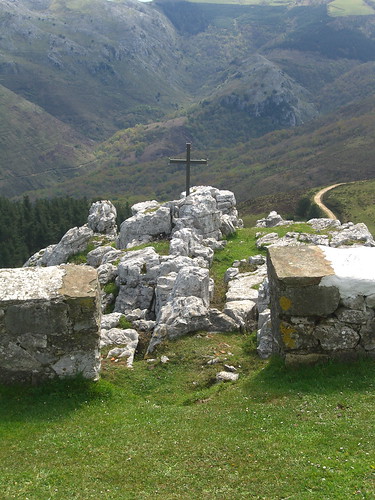 A cross overlooking a cliff. 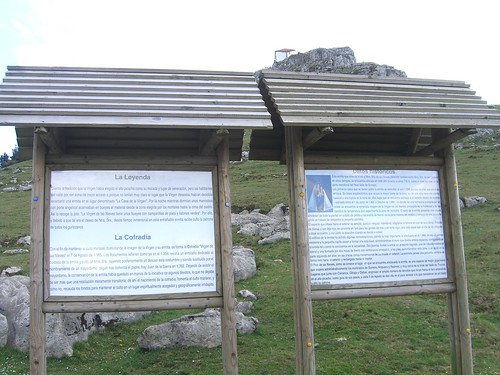 The information panels once we reached the bottom, with the church just visible above them. 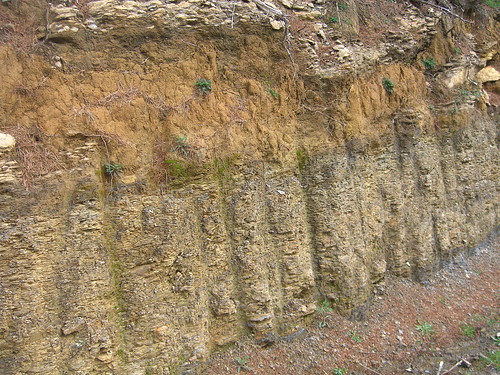 Some stratified soil that interested me on the walk to the car. How many years of layers must there be in these two meters?

Of course, since we came down the right way to the area where we should have parked, we had to walk about a half kilometer around to the other side of the mountain to get to the car. 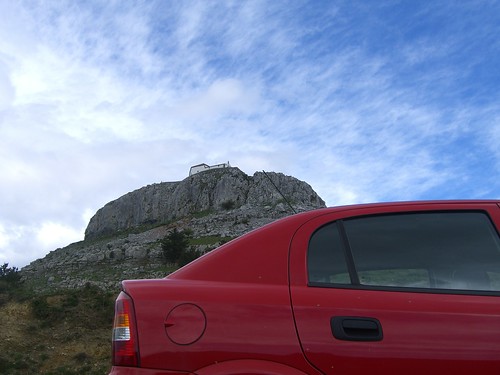 We finally made it! As we drove back, it started to rain, and within an hour, it the Pico de las Nieves was completely enveloped in a rain cloud. Good reason not to live up there.

I'd still like to go up there with my good camera, and maybe a tripod, on an even clearer day. We could just barely see Santander, which is 38 km away, and I suspect we could see even further. After all 778 meters is exactly the height needed to see 100 km to the horizon.