Last September, a distant cousin of mine, Mark, found my blog and left a comment explaining who he was. Mark's mother and my grandfather were cousins, both the grandchildren of Rasmus Rasmussen, a sailor, author and Lutheran reverend that sailed from Norway to the United States on a viking ship for the 1893 Chicago World's Fair. The fair was set up to celebrate the 400th anniversary of Columbus "discovering" the New World. No doubt the Spaniards, who had arrived in replicas of the Nina, Pinta, and Santa Maria, were a little peeved to have a replica viking ship proven capable of the journey as well. They first stopped in Washington, D.C., so that President Cleveland could meet the captain of the ship, Magnus Andersen. Check out this awesome list of "famous firsts" from the fair. This week, Mark has started sending me some old scanned photos and documents that his mother has about Rasmus and the family in general. He even claimed to have a photo of my parents and me when I was about five years old. I didn't believe him, of course, but sure enough, he sent it to me and there I was, cute as a button!

This excerpt from Mark's email is particularly interesting:

As I recall, your great grandfather was Halfdan Rasmussen, brother to my grandfather, John Martin Rasmussen (Johannes, in Norway). In my grandfather's old papers, I have found a letter from an attorney, written to my grandfather, that explains the trial of a young Halfdan Rasmussen when he was accused of stealing a ring from the home of his employer and then selling it to a merchant in town. The case was thrown out by the judge due to lack of supporting evidence. It is an interesting account - I will scan the document soon and send it to you.

You will see that there are papers quite old - one of which appears to be dated to 1887 in a document addressed to Rasmus. If you or anyone you know can translate the Norwegian, we will have great success in the understanding of what these documents mean.

I have learned that Rasmus was not permitted to be ordained by the one of the synods of the Norwegian Lutheran Church because he lacked the proper educational preparation. I believe it was the Hauge synod that eventually accepted him and consequently ordained him into the ministry to serve many rural churches and groups of Lutheran Norwegians in the wilderness of the Dakotas. 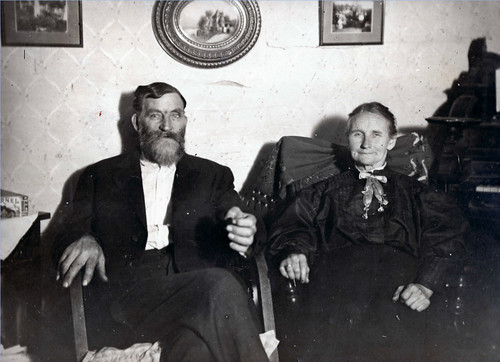 Rasmus and his wife, Ingeborg. These are my great-great-grandparents. Look at the size of his hands!! 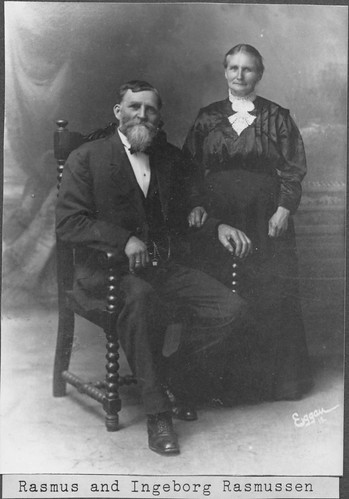 Rasmus and Ingeborg again. He's in the same chair, but looking a little older, as in the photo that I already had of him. 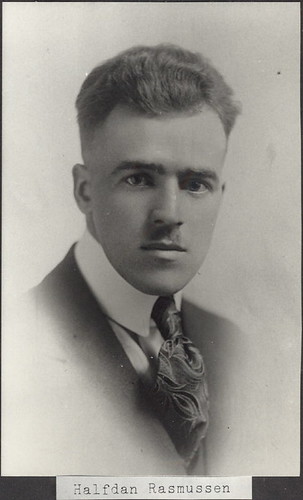 Halfdan Rasmussen, Rasmus' son. This is my great-grandfather. I had that puffed-out tie look going on at my wedding. 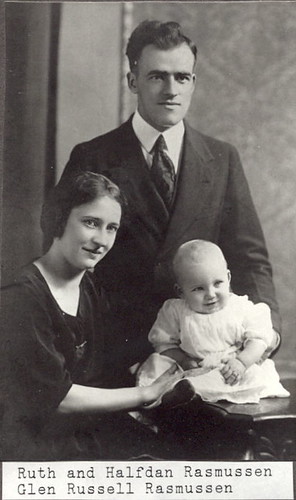 Halfdan, Ruth, and their adorable little son, Glen, my grandfather. 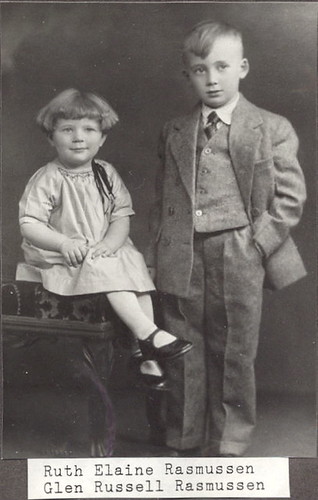 My grandfather, Glen Rasmussen, and his sister, Ruth. I think this is my favorite photo on this page. What a good looking kid! 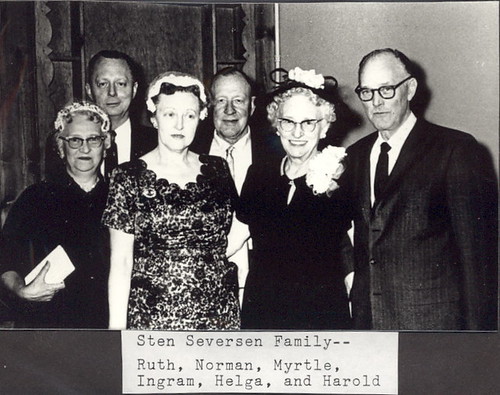 My great-grandmother, Ruth, and her family. 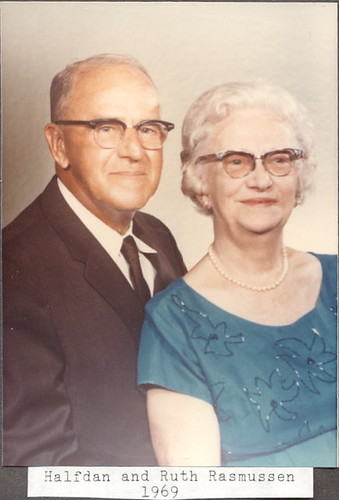 This is the only photo I recognize of my great-grandparents, Halfdan and Ruth Rasmussen.

For some reason, Mark also had this photo of my aunt and uncle and two cousins, [names redacted]. [name redacted]'s the miserable-looking one. 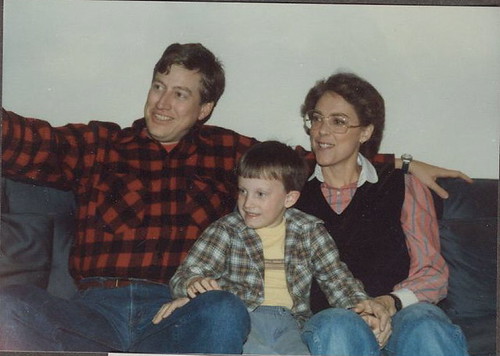 And here we have my parents and me. As ridiculous as they look with my 2008 eyes, I wish flannel shirts would hurry up and come back into style. 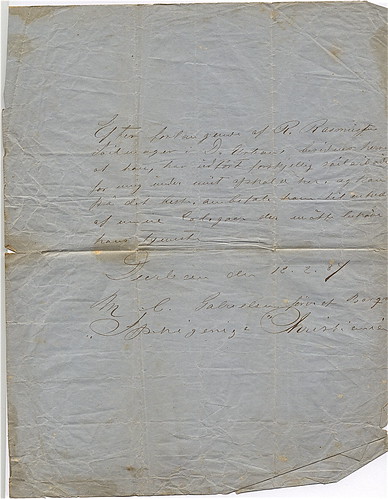 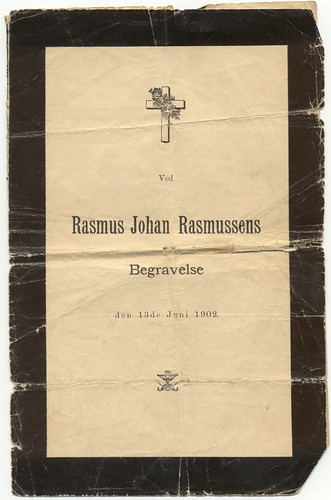 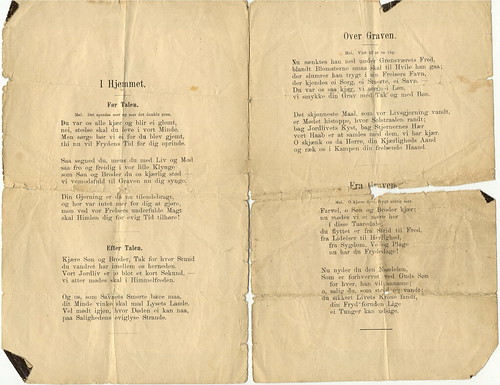 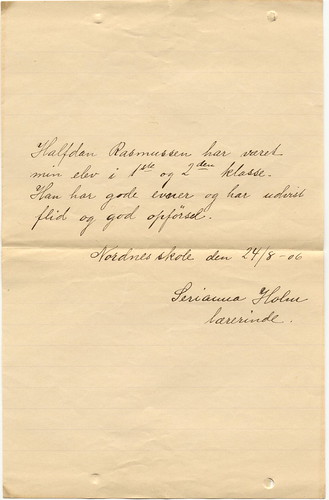 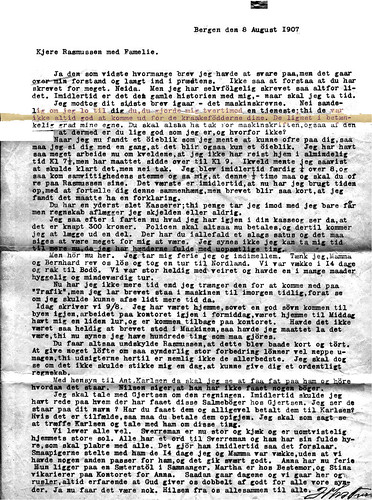 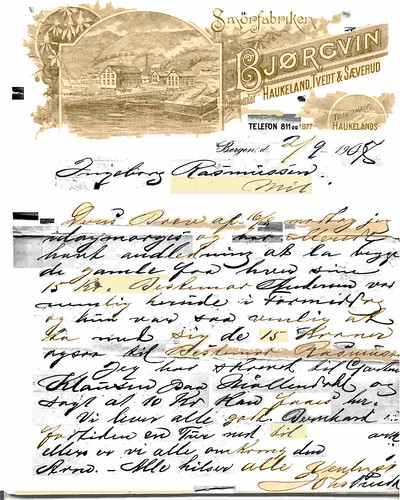 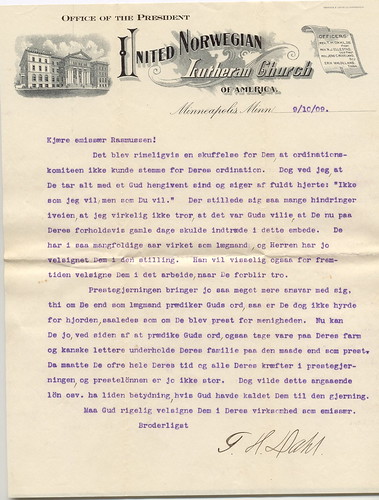 A letter to the Rasmussens from Reverend T. H. Dahl, dated October 9, 1909. I looks like my "Kjere = Dear" hypothesis is confirmed.

And there you have it. Mark says he's got quite a bit more and is going to scan and send it to me when he can. I'm excited about digitizing and distributing these documents and photos to help preserve them.