Two disasters befell me yesterday. Both times, I was saved by the foresight of my friends. The largest disaster, by far, was that I accidentally deleted my entire blog database. All those 198,919 words in 522 posts, and 93,656 words in 1,730 comments, everything was gone! I had no backups! My friend and coworker, Alan, whose blog shares a server with mine, had set up an automated daily back up of all the websites on the server. After restoring my database, I had all but my last post and some of the comments on my penultimate post. I was able to recover the last post from my Firefox cache, and I pasted back the lost comments from my RSS reader that had them saved. So everybody go over to Alan's blog and leave a comment about how grateful you are and how cute his kids are. THANK YOU, Alan.

Earlier in the day my new, expensive camera got away from me and tumbled to the floor.* When I recovered it, there were two cracks running the diameter of the UV filter. For those of you unfamiliar with SLR cameras and lenses and things, a filter is a little piece of glass that screws onto the front of the lens and serves several purposes. They often filter or polarize the light in some way, they keep dust off the actual glass of the lens, and they are the first defense against violent forces. When I was asking him for advice about purchasing a camera some months ago, sgazzetti explained to me about these three functions of filters. Then he used a sentence that I will never forget: Lens filters are as optional as motorcycle helmets. How very, very true.

The filter cost me $6.99 in the States, and is going to cost me 5 to 6 times that in Europe. But, like a motorcyclist who's just had an accident that cracked his helmet, I'm not about to ride anywhere until I get a new one. Next time I'm in the States, I'll probably buy a half dozen just to have a stockpile for future accidents. 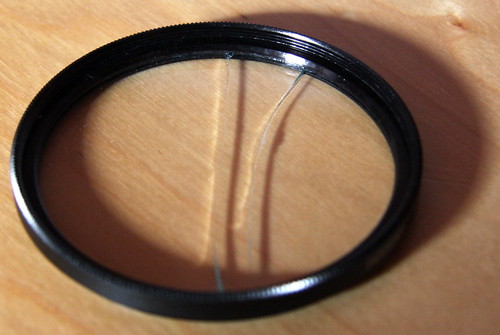 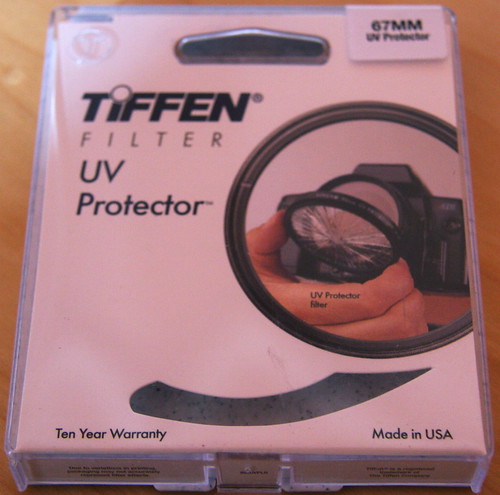 Check out how it even specifically depicts a shattered filter, but protected camera, on the box.

Thanks again to both Alan and sgazzetti.

*One of the odder constructs in Spanish is how the verb "drop" is constructed. In Spanish, when you drop something, the subject of the verb caer is the object doing the falling: Se me cayó la cámara. In Spain, no one drops anything, but items do sometimes "fall from people". I like thinking in that way, particularly when that sentence structure is keeping blame away from me.