I'm not sure how I found it, but I was recently fascinated by this article about using an LED flashlight as a light source for still life photography. I was especially excited because I had only recently acquired, for the first time ever, a camera that could take long (multi-second) exposures and an LED flashlight.

At first, I tried waving the flashlight in front of the camera by hand, but the results weren't very pleasing. The lines broke at sharp angles as I changed direction. To smooth things out, I had the idea to dangle the flashlight from a string, thus producing nice sweeping arcs. 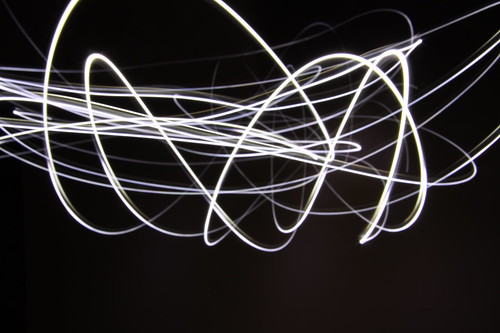 I like how some of the lines are fainter than others. Presumably when the LED was moving faster. 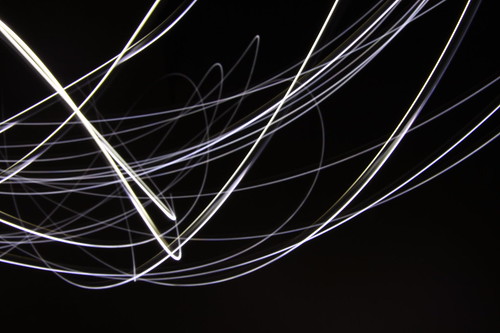 This is my favorite, I think. There's a real sense of depth. The light swung from about 10 to 150 cm from the camera.

And finally, I tried it with a subject, producing these images here. Once the shutter opened in the pitch black room, I turned on the flashlight and moved it all around, while pointed at the subject, sometimes casting huge elephant shadows on the wall. Overall, I'm quite pleased and look forward to more experimentation of this sort.