National Grandparents' Day isn't until September, but I just saw my two remaining grandparents, and I thought they deserved a post. My maternal grandfather recently had an accident. He was impatient to get out of my parents' van and took a nose dive out of the passenger seat onto the pavement, breaking his arm near the shoulder in the process. By the time I saw him, he wasn't in much physical pain anymore, but was still mentally kicking himself for having the accident in the first place. His face was still pretty black and blue and he was already unamused by "You shoulda seen the other guy!" quips, despite that being exactly the kind of thing he'd say (let's just say I know where my wise cracking genes came from). 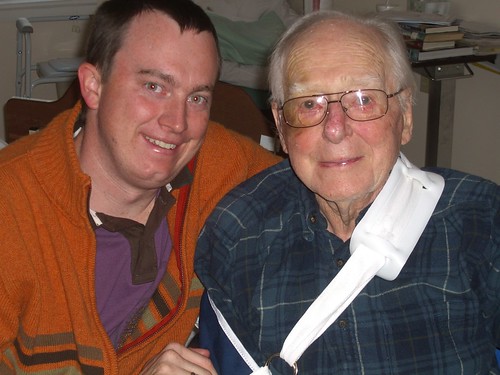 My paternal grandmother is still going strong, her weeks are full of gardening clubs and golf outings. She's even volunteering to do poor immigrants' taxes for free. Personally, I'm already too old to study tax codes, so you can imagine how young her mind is. Here's a video of her smacking a golf ball up tight next to the hole last Saturday.

I took this video because, two years ago, on this same hole, I was standing behind her, like I was here, and she put the ball in the hole for a hole-in-one. She started playing golf in her 50's and needs two hands to count the eagles she's had. Amazing!

I love you both very much.