Yesterday I played golf in a little town called Pedreña that is near Santander. Pedro, the guy that runs the Laredo Golf Club, called me up and asked if I wanted to play 18 holes in the morning. I jumped at the chance, since I have the 10th Annual Myrtle Beach Classic coming up in February, and every little bit of practice helps, and I hadn't swung a club since the Beach Golf tournament last year.

As usual, I surprised myself at my ability to come back from hardly playing at all and shoot pretty well, considering the circumstances. I shot a 77.... ...of course the course was only a par 64 with an extremely easy slope rating, so my performance was nothing to lower handicaps over. Like most courses around here, it was only 9 holes long, so we had to go around twice. I was 9 over on the "front", including a quadruple bogey, and 4 over on the "back", including the only birdie seen all day in our foursome.

The course was very short. Nothing more than a 5-iron was needed, but that didn't stop us from using drivers on some tees. The course is a twenty-five minute drive from Colindres, and it took us exactly four hours from leaving Colindres to return to Colindres, including 18 holes and a beer for the winners (Pedro and I beat the other two). Not bad for a Tuesday morning.This page has a nice description of the course:

Campo Municipal de La Junquera The La Junquera municipal course is situated on the road from Astilleros to Pedreña, right at the entrance to the beautiful village of Pedreña which belongs to the Municipality of Marina de Cudeyo. The course is surrounded by wonderful scenery and has been adapted to the natural terrain of La Junquera. The name (â€œJunqueraâ€ is Spanish for â€œbulrushâ€) comes from the fact that in former times all of the land was a marsh with a peninsula to the south of the bay of Santander. Today, the course offers fantastic views of the bay and the city and the distant Picos de Europa Mountains. The municipal course at La Junquera de Pedreña golf club was inaugurated in May 1997 and is very demanding. The way the course has been designed means the highest degree of concentration is required because otherwise it will be raining double and even triple bogeys. It is a short but very technical course and accuracy is the key. Along with the 6th, it is the 2nd, 3rd, and 4th which are surely the most difficult, because the first part of the round is flanked by the bay all along the right-hand side. You wonâ€™t be playing many woods on this course as itâ€™s more for players who are good with their irons and for those who are good at the short game and on the green.

I felt right at home with the foursome we played with. One of them was Mario, the guy I played with in the Beach Golf tournament. When we got there, the other two guys were already on the first tee shouting for us to hurry up. By the time we made it to the tee, they'd already teed off. Like I said, I felt right at home. :-) We played match play variant called Bueno y Malo, which would probably be "High Low" in English, where, for each hole, the best scores and worst scores of each two-man team were compared, with two points at stake on each hole. Pedro and I beat them pretty soundly.

The view from the course was spectacular. When the morning fog lifted, we could see a beautiful skyline of Santander across the sound. It was low tide, so, like in Colindres, there was lots of exposed tidal land.

If you click on the panorama, there are some notes showing various items in the photo. 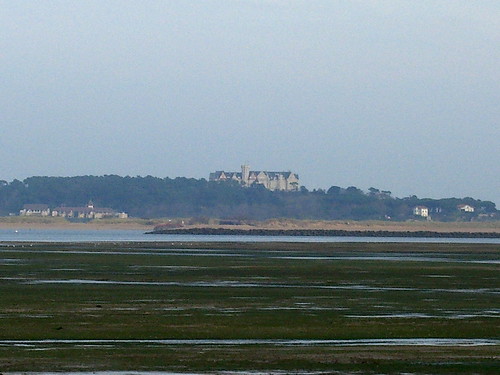 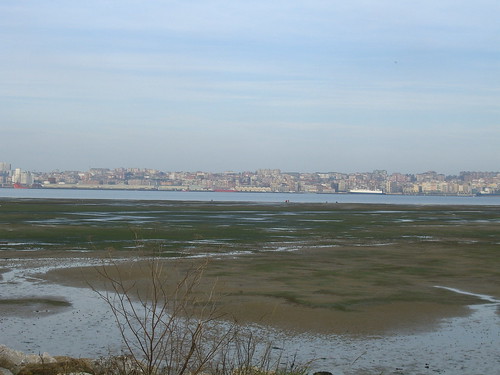 The skyline zoomed in. 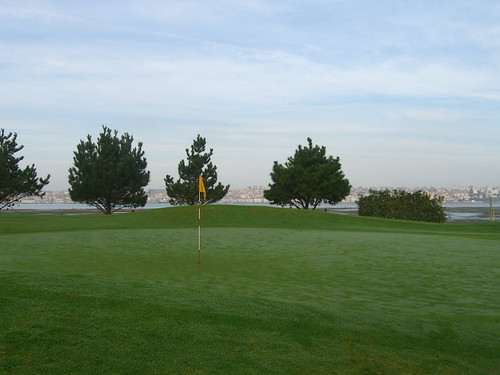 Here you can see how the course is right on the coast with the skyline on the other side. 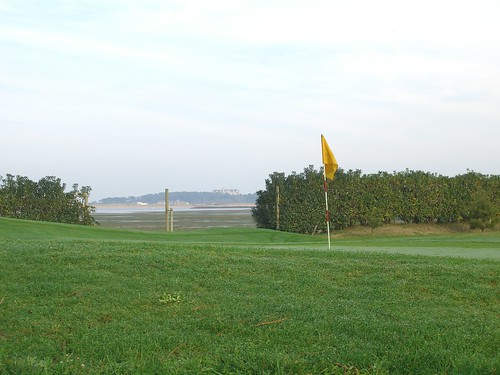 A shot with the palace peaking through the trees. 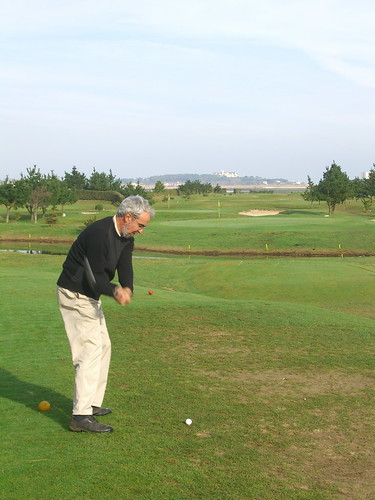 Pedro hits towards the palace. 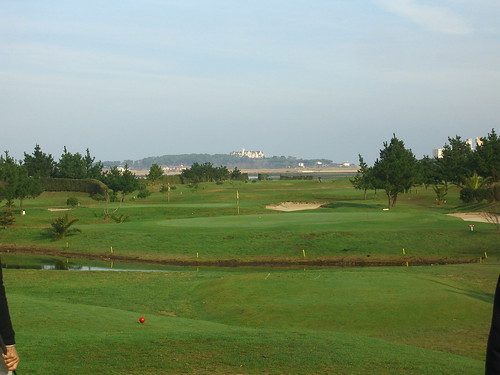 See that ball on the green? That was my drive on this par 3. I sunk it for the bird.

By the way, Pedro has written a beautiful proposal for a golf course for the unused sandy forested region near the tip of the Laredo peninsula. He's even got all the holes designed and everything. Check this out. How beautiful is this?

Click on the image to see it larger. It's worth it.

You can read his proposal, in Spanish, of course, here.

All in all, it was a most enjoyable morning.