Johann Strauss, the Pope, and a dachshund walk into a bar...

For the past four or five years, I've enjoyed one particular New Years ritual immensely. If you live in Europe, or ever spend New Years in Europe, you must try this:

Every year, the Vienna Philharmonic Orchestra gives a New Years concert in the Golden Hall of the Musikverein in Vienna, consisting almost entirely of music composed by Vienna's own Strauss family of composers: Johann Sr, Johann Jr. and Josef. You could say it's very "Straussful". Mostly marches, polkas, and waltzes.

The music is fantastic, but the production of the televised event is truly amazing, with cameras sweeping through the Golden Hall and live performances by ballet dancers elsewhere in the huge luxurious ballrooms in the Musikverein. This year things got a little silly as they injected a Euro 2008 soccer theme to the choreography, since Austria is the co-host of the tournament.

I enjoy watching this concert so much that, this year, I got up two hours early! I went to bed at 6:00 and got up at 9:30, not realizing that the concert, which always seemed to be on when I got up on New Years morning starts at 11:30 CET! Doh! At that time my only options on television were loud cartoons, some tired-looking pseudo-celebs, the same ones that had been on 12 hours earlier, still trying to get me to send an SMS vote for my favorite debut album of 2007 (anyone who watched all 12 hours of that doesn't deserve to live), and Pope Benny, looking equally as tired, reading from a two-ton tome in a voice that makes Ben Stein seem like Richard Simmons. With the selection available, I chose the pontiff, mainly because the sweeping/slow-zoom camera work of the Basilica was very similar to that of the Vienna Philharmonic concert. I think I understood more of the Italian than the overdubbed Spanish that was also being read over the coverage. It was kind of funny how sometimes the Spanish, which had clearly been translated beforehand, would get ahead of the Italian and the speaker would have to stop and wait for ol' Benny to catch up.

This led to the later amusing conversation with Marga, who, in her defense, wasn't yet running on all cylinders:

Marga: What did you do when you got up so early this morning? Erik: Watch TV. Marga: Anything interesting? Erik: El Papa. Marga: Which papa? Erik: How many are there?

I'll always remember something that I learned in my high school Spanish class. In Latin America, the word for "the potato" is la papa (here it's "la patata"), and the word for "the Pope" is "el Papa". When my teacher taught us the word for potato, she warned us that it was very important to get the gender of the article correct so as not to insult the Catholics talking about "fried popes" or "pealing a pope". Good stuff.

Right, so anyway, if you're ever in Europe on January 1, be sure to check out the Vienna Philharmonic New Years concert on television. It's worth it. 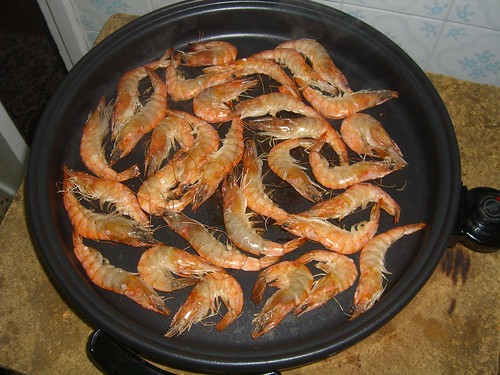 It sucks to be an arthropod when there's no elbow room. 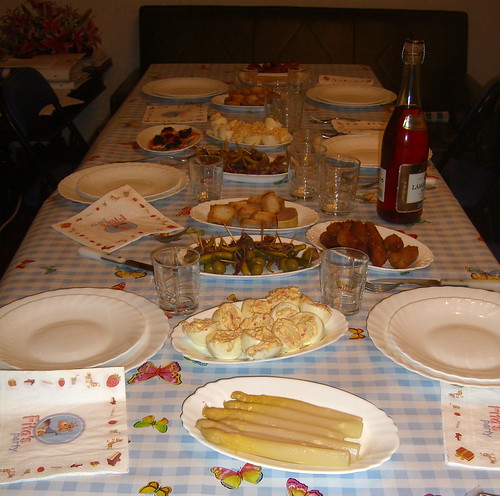 The table is set! 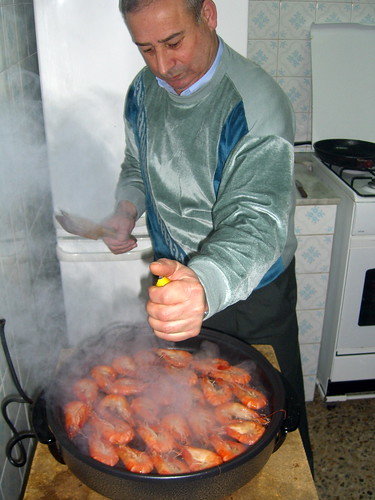 Juan lets all of 2007's stress out on a poor lemon. The satin pajama top look is all the craze in Milan this year, by the way. 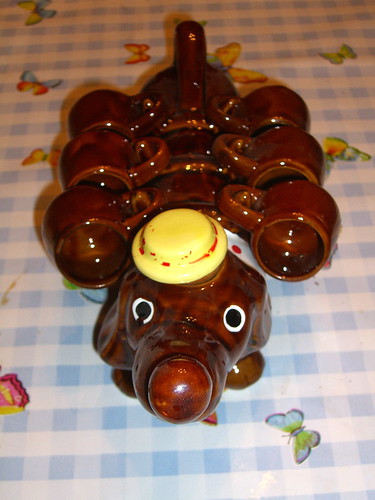 After dinner, we pulled out the wiener dog, which has forever intrigued me sitting up there on the shelf. 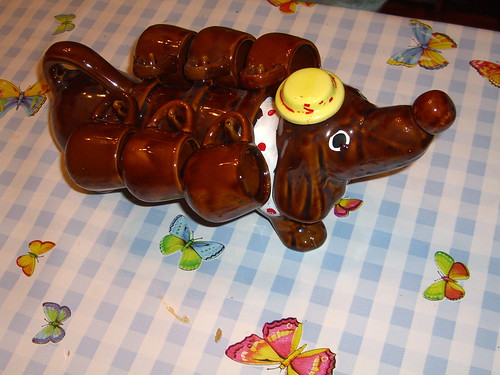 His hat comes off and you pour your beverage of choice inside his long fuselage, and then his nose pops off to pour with. No holes at the other end, thank god, just his tail as a handle. 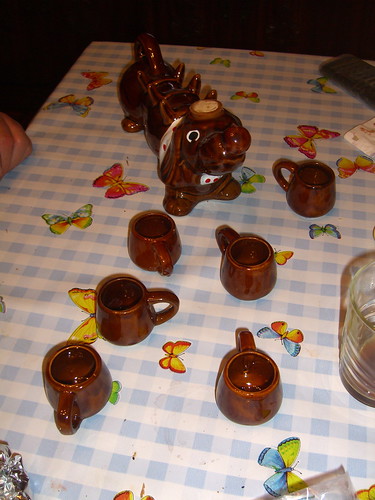 We didn't actually use him as vessel, just his cups. 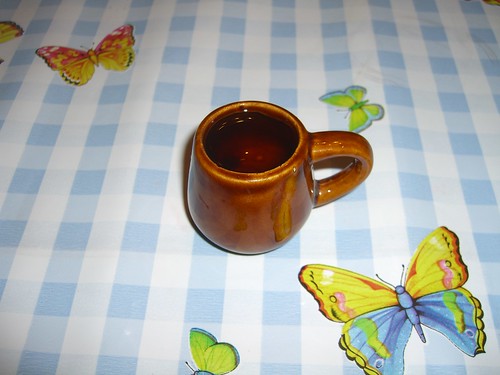 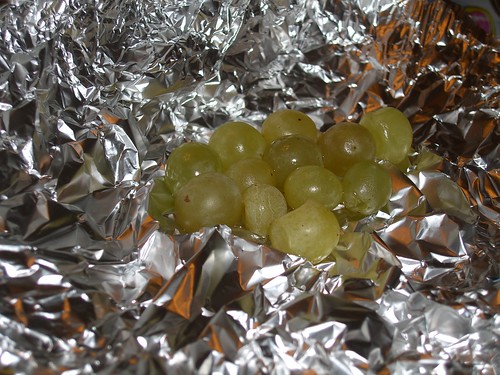 My twelve grapes, pre-counted and wrapped in tin foil.

According to a citation-needed Wikipedia article, some clever grape farmers 98 years ago got the idea of starting a tradition of eating one grape with each strike of the clock at midnight on New Years Eve. The meme spread like wildfire and is pretty much a non-optional tradition now in Spanish households. This year we had seedless grapes, a relative rarity in Spain. Plus they were small too, so not much risk of choking. In fact, some of the people around the table finished too early. Tradition mandates that you eat one grape per chime of the televised clock in Madrid, but we were seated next to the window that faces the local church, so we had two one ding and one dong for every second after midnight.

Other traditions include wearing red underwear, having, but not eating, three lentils with you (the lentil farmers aren't as clever as those at the vineyard), and putting some gold jewelry in your champagne glass as you toast and drink. This was the first year that I actually had any bling on me, but I chose not to remove my cherished symbol of matrimony. 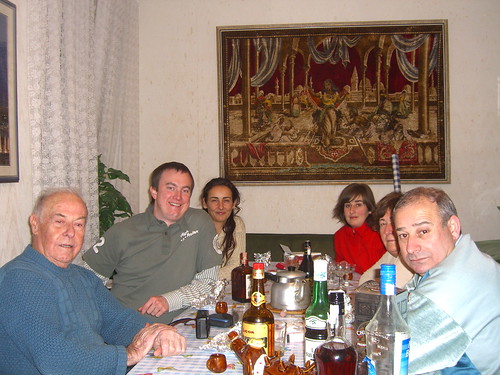 The best of a half-dozen attempts at timer photography of all of us. 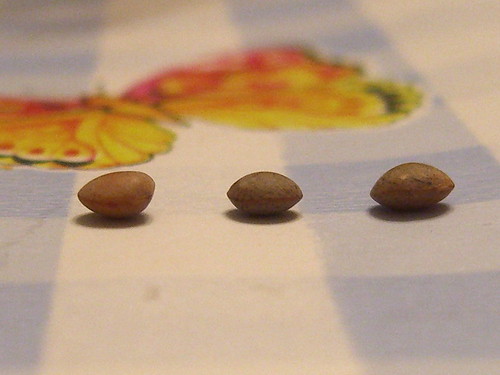 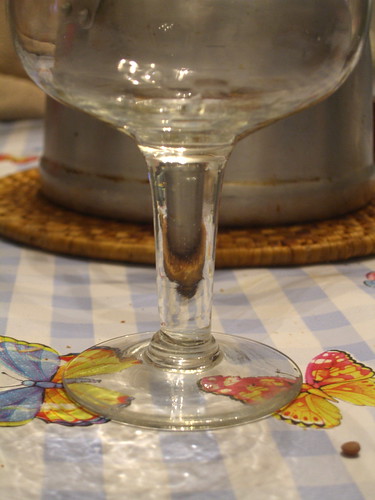 I thought it was cool how I could see all the way around the coffee pot in the stem of my glass. Optics rule!

A self portrait through my champagne glass. 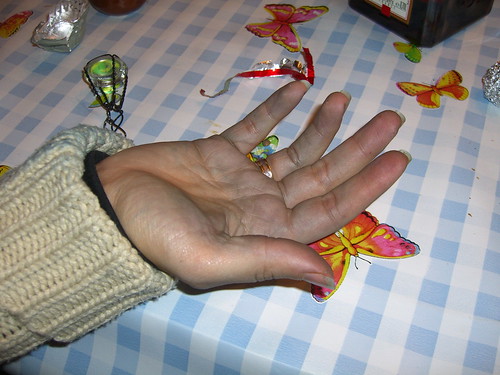 Either I married a smurf, or Marga's blue jeans have a dye problem. 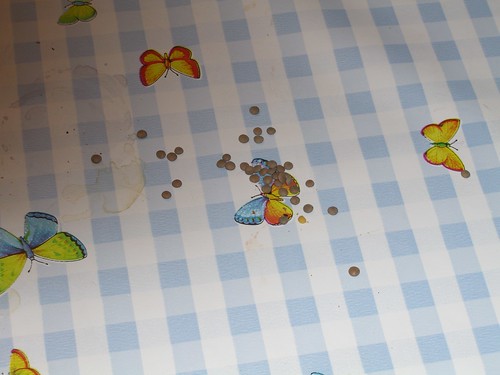 A soup of lentils attacks a butterfly.

What, you didn't know the collective noun for lentils? 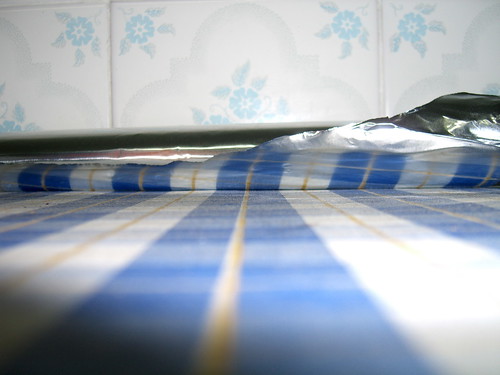 A roll of tin foil on a kitchen counter. Did they ever really make it out of tin? Yes. 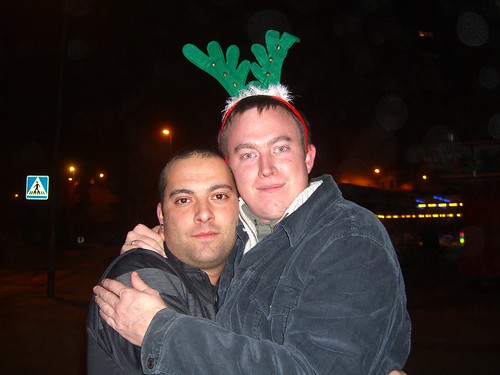 On the way to party like it was 2008 at the Centro Extremeño, we ran into cousin Andoni and his French fiancé, Laura. I'm not sure why we look so amorous in this photo, but we look like a pretty cute gay couple. 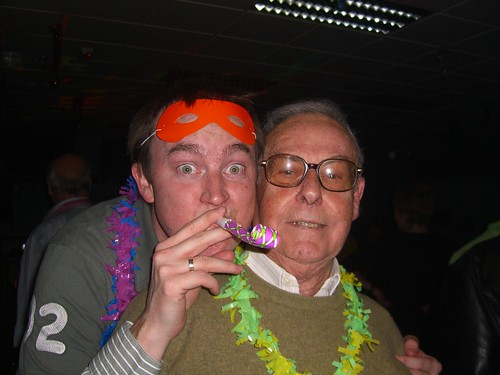 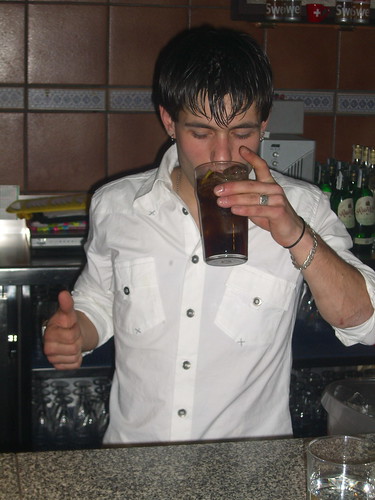 I watched as this bartender very carefully placed each ice cube into this glass, cut a lemon, ran the lemon around each millimeter of the rim, poured in a healthy amount of rum, and filled it to the brim with coke. I thought, "Man, this guy's a really great bartender! He's taking a lot of care to mix this drink for someone." He then proceeded to take a huge swig and set it behind the bar for himself.

He gave Juan and me a drink on the house, so I like him...even if he does have a gum piercing! 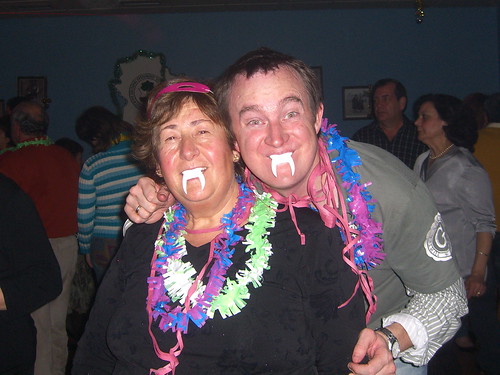 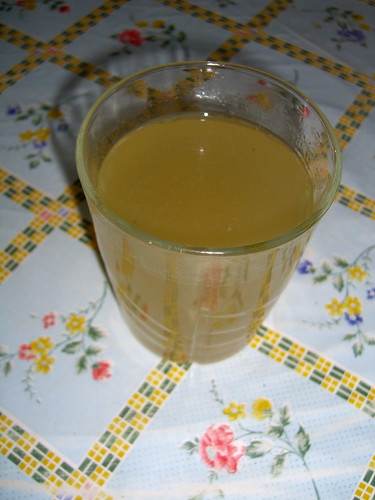 Another tradition for New Years morning is this wonderful chicken broth that Grandpa Ramón makes. It is SOOO good! And great with a dash of hangover. 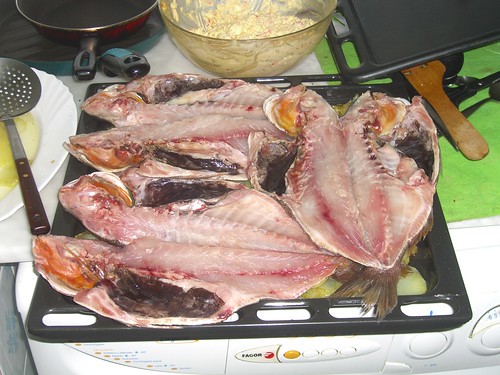 For lunch we had vesugo. That's axillary seabream to you. 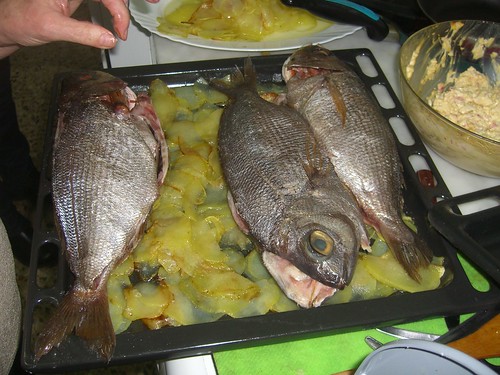 On a bed of slightly fried potatoes and into the oven! 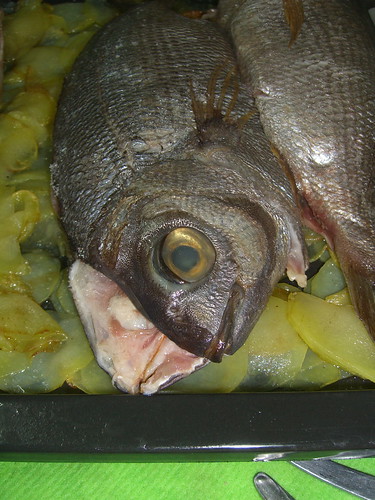 Something tells me this guy wasn't the only one with a splitting headache on January 1st. Har har...

We've got an extra day this year! Woohoo!