My sister-in-law recently purchased a new computer that came with Windows Vista pre-installed. She couldn't stand it. She said, "I can't find anything anymore!" The first thing she did with her new computer was have her boyfriend come over and install Windows XP on it. I suspect that this scenario has played out for thousands of surprised computer customers. People vehemently dislike change. This change-hating inertia is exactly what keeps people using such a crappy operating system in the first place. Within the first week, she called me and said, "Whenever I try to run a google search in IE a box comes up and says something about 'spyware has blocked something'. What do I do?" Upgrading software to provide more features without confusing the user is a very delicate balancing act and Microsoft has really screwed things up (and is frustratingly not yet bankrupt).

The three or four people that I have spoken to about their recent upgrade from Mac OS X Tiger to Leopard, when asked what they think of the new operating system, all have said, "[shrug] Meh, looks pretty much the same". This is a huge compliment to the designers of Leopard. It's supposed to look exactly the same! Of course some things have changed. Very few people like the translucent menu bar initially. The firewall settings have moved and gotten dumber, etc. But no one that is familiar with Tiger will say, "I can't find anything anymore!"

Wait, what was I talking about....oh yeah, windows upgrades... The cheapskates that built our building made our windows out of wood. The wood is really gorgeous. But it doesn't last very long unless carefully maintained with waterproofing varnish, which no one has done over the 12-year lifetime of the building. Three of the windows in our house are starting to leak, and the moisture is causing paint to peel. So we've decided it's time to install a new version of windows.

The aluminum folks chopped off a few samples for us to take home and pick a color. The way they can make metal look like wood these days is incredible. One of the samples was a little shiny and was obviously metallic, but with the other one you can't even be sure whether it's wood or not even when you touch it. Amazing. 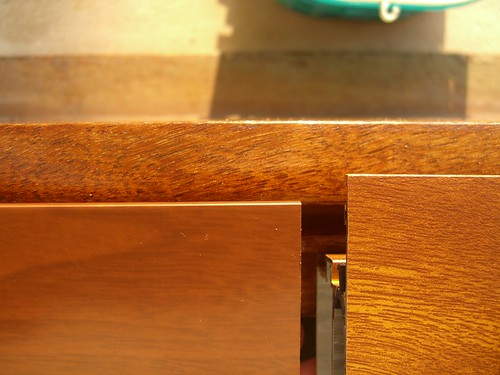 What's on top is our current wooden window frame. Bottom left is the shiny metallic-looking sample. Bottom right is the color our new windows will be. 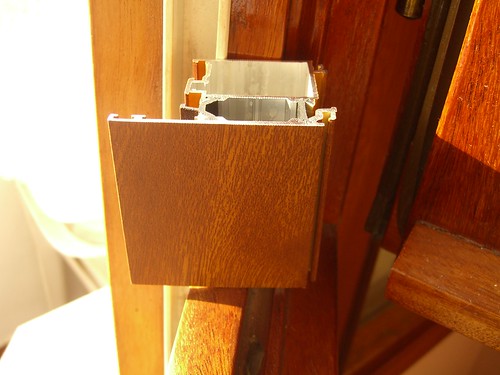 So sometime in January, we're gonna get a newer, more modern, version of windows. Hopefully the user interface will be the same.