The other day during a morning walk around Colindres, I found this very waterlogged album cover lying on the wet pavement. So I took a photo and forgot about it until today. Using the all-knowing internet tubes, I've found some information about the album. 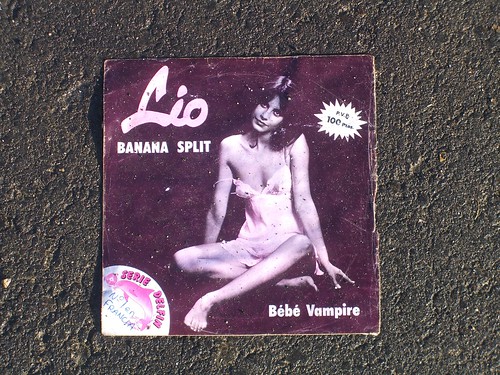 Portuguese-born Wanda Ribeiro de Vasconcelos is better known as 80s Belgian pop sweetheart Lio. 'Bébé Vampire' appeared on Lio's 1980 debut album, released in 1980, and like most of the songs on that album, was created by celebrated Belgian songwriter Jacques Duvall. Duvall was also wrote her infamous, 2-million-selling 'Banana Split', which she says, like France Gall with 'Les Sucettes' before her, she was too innocent to understand the double entendre behind.

Less than a fortnight ago, someone posted this classic song to YouTube for your "enjoyment". Ahhh, 80's europop...

The SpikedCandy review nails it by calling it "a fizzy synthpop confection".