This weekend, we finally moved our old British refrigerator into Grandpa Ramón's house (third floor, no elevator). It has been unplugged for three years, sitting in a corner of the covered area where my father-in-law keeps his chickens, so there's a chance it might not work anymore. They say you have to keep fridges working or they can break. Of course, he'll need to find a power adaptor first. The other thing in the pile next to the refrigerator was my old G5 box. We decided that we wouldn't be needing it anymore. In retrospect, it was rather silly of us to bring from England, but whatever. 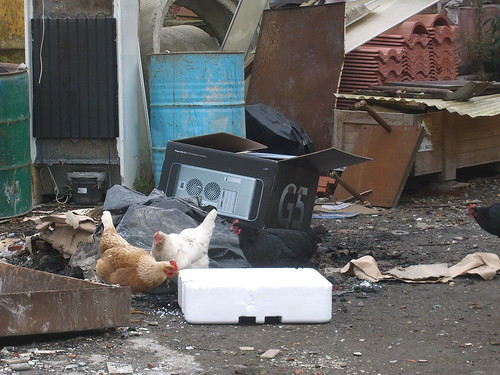 So we left the box on the "to be burned" pile. The chickens seemed to really enjoy eating the styrofoam. They can't possible get any nutritional benefit from it. I think they just like the texture. It doesn't seem to be toxic to them, but, as a likely consumer of the little foam peckers, I was a little concerned that they'd eat a chemical that I might prefer to not ingest. Juan said they eat lots of crazy stuff like that and not to worry. Oh well. 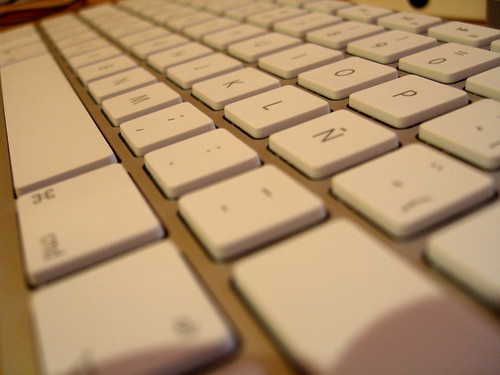 On Friday, in Vitoria, we passed by an official Apple reseller and I bought a new keyboard. I came really close to buying the new Bluetooth version, but I didn't like the idea of having to use the Fn key to access all the sound controls, and the wired version was 40% cheaper. Unfortunately, I've since discovered that, even with the larger version (it's longer than my previous keyboard), I still have to use the darn Fn key to control sound volume. Darn.

The other thing that I didn't consider properly at purchase was the obvious fact that the keyboard they sold me would be the Spanish layout (see the í‘ key?). This is less of a big deal, though, since I rarely look at the keys.

Anyway, I thought there was a strange symmetry between these two photos.