The sun was shining early, so Marga and I got up at 7:00 to have breakfast and spend a few more minutes on a Caribbean beach before packing up the suitcases. We used the morning to take a walk around the hotel and snap some condemning photos to show our travel agent when we got back home. Pretty disgusting, all of it. 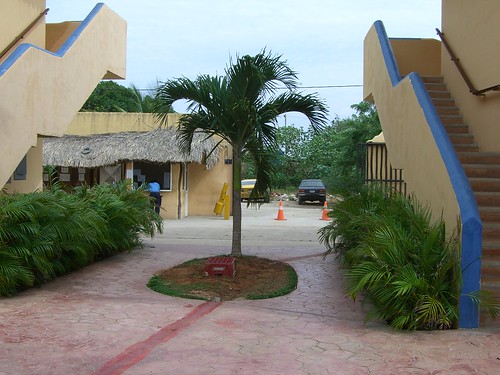 The stairway to the left went up to our room. Where the guy in the blue shirt is is where the hotel employees come to clock in. Just outside the broken gate are some broken down old cars and garbage. 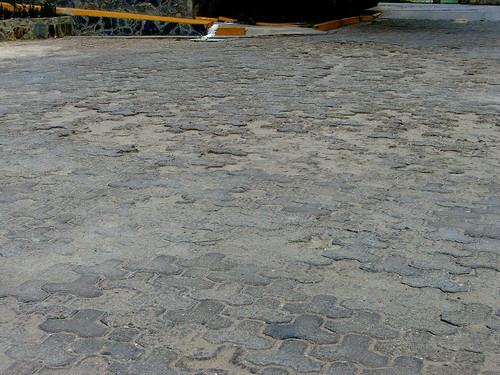 Another enhanced shot of the paving at the hotel entrance. 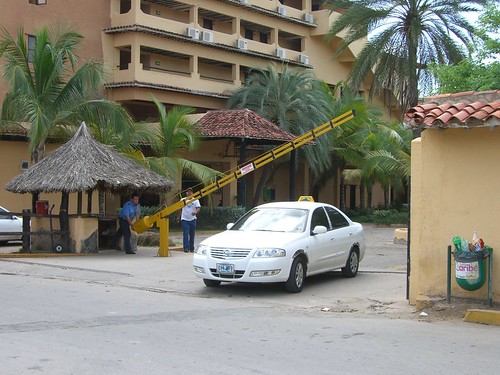 I got a chuckle out of this every single time I saw it. Check out the mechanism for opening the gate. 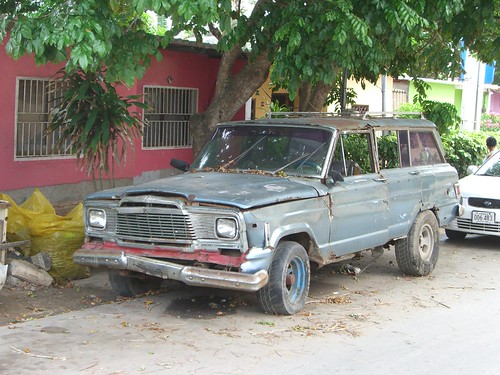 This rusting heap was literally parked right outside the hotel gate. 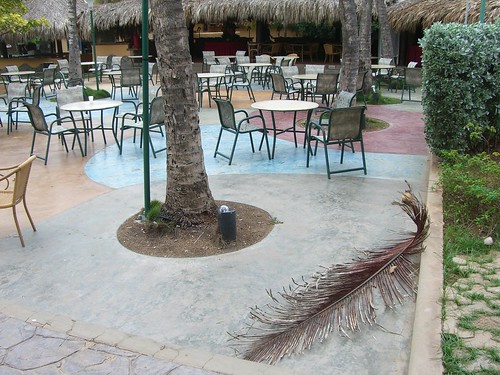 One day we were sitting having lunch and this huge dead palm branch went WHOMP! right between some tables near us. Judging from the force it hit the ground, I think it could have killed or paralyzed someone if they had been unlucky enough to be walking underneath. Don't be fooled by it's feather-like appearance. No hotel employees came to investigate the noise, and two days later, the branch had been pulled into this corner, but still not disposed of. 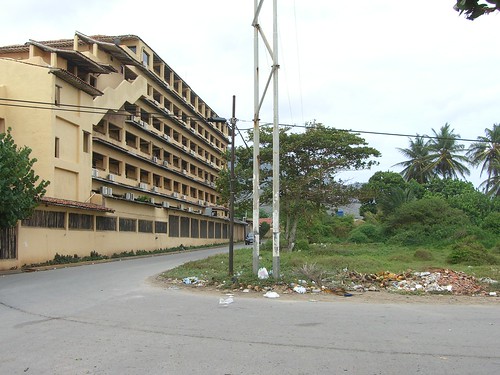 This is our hotel. 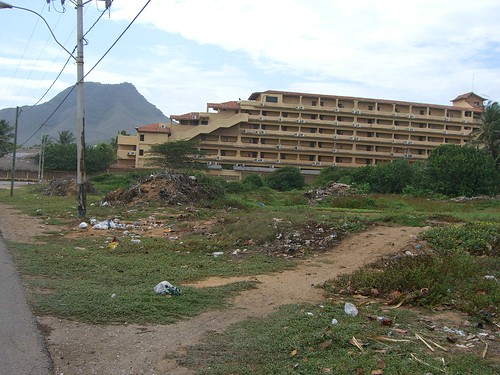 Here's a better angle. It was surrounded by empty trash-filled lots on almost all sides. 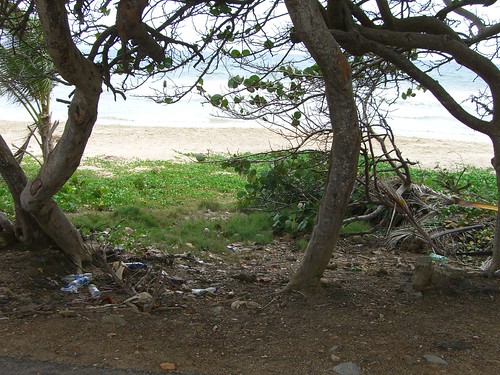 Garbage near the beach. 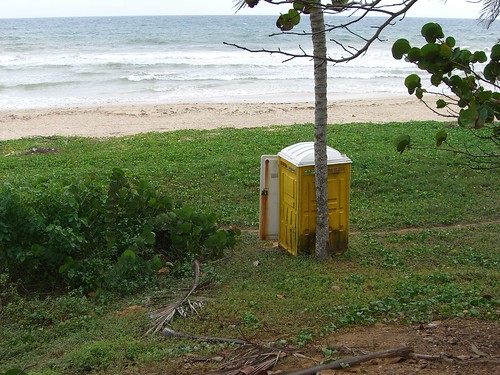 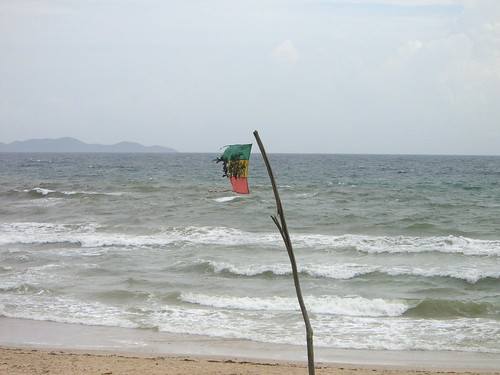 I thought this tattered flag was kinda cool. 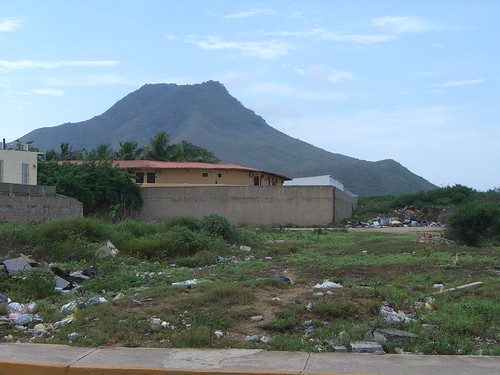 See the tall cement wall protecting the yellow hotel from the garbage? 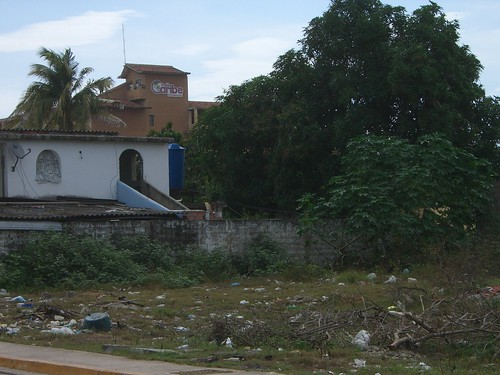 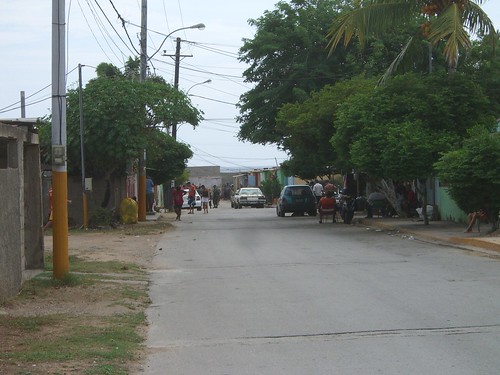 At the end of this street was a collection of small fisherman's houses. See the folks sitting in the street with nothing better to do. 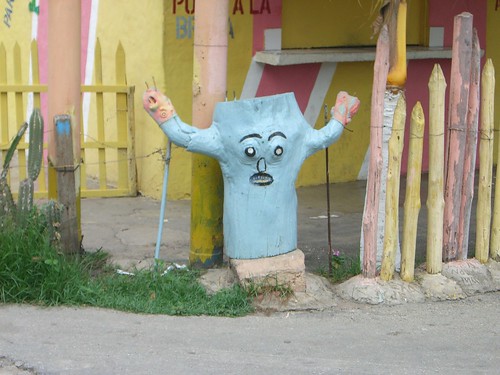 This stump near a closed-down bar was kinda funny.

This was the empty area on the other side of the adjacent Isla Caribe hotel. 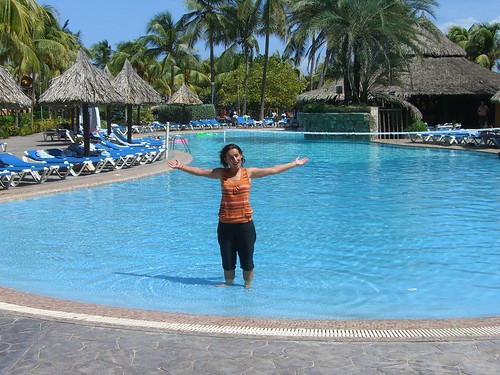 To end on a more aesthetically pleasing photo, this is the hotel pool, and as far as either of us got into it. The photos advertising the "resort" show only this part.

The fact that we spent such a large portion of our stay on a Caribbean island in a shopping mall is pretty damning of the hospitality at our â€œall-inclusive resortâ€ hotel. That sentence makes me sound like a snob, but our options were, A) hang around the filthy hotel ordering drinks from indignant, unfriendly bartenders that never had the necessary items to mix the drinks you wanted to order, B) walk around a garbage-filled neighborhood more-or-less with a â€œPlease mug me!â€ sign around our necks, or C) go to a clean, air conditioned shopping mall and absorb a little bit of culture that way. Believe me, we tried the first two, but being isolated in the hotel is the least interesting thing to do culturally, completely wasting your opportunity to expand your mind while in a foreign country. And thereâ€™s only so much trash you want to wade through in your honeymoon.

For no good reason at all, we had to have our suitcases in the "lobby" under little to no supervision very early in the day. We were basically stuck at the hotel doing nothing all day. There wasnâ€™t any pizza like weâ€™d found the day before, but I found some pasta that I could eat without gagging. At least we knew everybody by then, so we could sit and talk in groups to pass the time. We mainly talked about how much fun it would be to see the new bus load of freshmen Spaniards arrive from the luxurious cruise ship and discover themselves in the Pueblo Caribe shit hole. Just before our scheduled meeting time, Alejandro, our cruise company guide came and told us that the plane was delayed and that we should wait here a little longer until there was more information available.

About this time the new Spaniards started arriving. We were quite disappointed that they didnâ€™t seem very angry. I turned out that they were just stunned for the first little bit. After seeing their rooms, they came and complained how unacceptable everything was to Alejandro. Just as heâ€™d done with us, he diffused the situation with smiles and "well now that you're here, there aren't many options" logic. Marga and I tried to console one woman by explaining that weâ€™d survived, but one too many anecdotes about what we'd seen escaped our lips and she got spooked. Anecdotes such as this:

One day we saw a couple that we knew walking to have breakfast. They looked a little tired, so we asked how things were. They explained that, during the night, one of them had woken up with an itch on his arm that wouldnâ€™t go away. He turned on the light and found that his arm and bed were covered in ants, and there was a steady black line of them going across the room and under the door. They quickly realized that it was going to be futile attempting to sleep any more in that room, so they went down to reception to complain. The receptionist, who clearly resented having someone to deal with, told them that there were no rooms available and that they could change rooms in the morning. The couple explained that there was no way they were going back to that room, and that they would sleep on the lobby couches if necessary. A little later a room was "found" for them, and they moved their luggage, carefully checking it for ants. They changed back into their pajamas and went to bed. As soon as they turned off the light, WHACK! One of the legs at the foot of the bed broke. They managed to prop it up somehow, maybe with a suitcase, and sleep the rest of the night.

And here we thought that, when referring to our hotel, they were using the first definition of resort, "a place that is a popular destination for vacations or recreation", and not the second one, "a strategy or course of action that may be adopted in a difficult situation."

Eventually, a new Pullmantur (the cruise company) representative came to explain our situation. We had our plane, but the flight crew for our return flight was stranded in the Dominican Republic, where there was a huge tropical storm, Noel, that we later found out killed a bunch of people. They told us that it looked like we weren't going to be leaving that day, and that they'd try to get our rooms back from the hotel. Sure enough, we got our same room back, and took our heavy suitcases up to it. Several people decided to go for a swim in the pool, and others went to the beach. One hour later, just as the idea of another night in the warmth of the Caribbean had settled on our brains, we were all told that our plane could leave and that we should get our bags and meet the bus in one hour. Everyone from the beach had to be located and told of the change of plan.

We were loaded onto the bus, which had its air conditioner set to "see your breath" and were taken, shivering, to the airport. Marga and I had brought our long pants and jacket in a carry-on to change into the warm clothes we'd be needing in Madrid at the last possible moment. When we arrived at the airport, our new guide explained how we had to pay our ransom tariff to the authorities.

A Quick Guide To Leaving Venezuela

This was not explained to us by our travel agent. In order to leave Venezuela, you have to pay 134,000 (approx. 34 USD) Bolivars per person, in cash, to the authorities at the airport. Otherwise they won't let you leave the country. We had to pay part of it upon entering the airport, and then the rest when we checked our bags. The travel company can't pay this for you, because the authorities insist that it's paid in cash by each traveler at the time of departure.

The plan was to fly to the Dominican Republic, change crews, and then continue to Spain. There was no drink service on our 90-minute flight into Santo Domingo. Our crew for that flight had come that day from Madrid and were exhausted. For our hour-long can't-leave-the-plane layover, they at least opened the doors. Marga and I cleverly positioned ourselves so that we could stand up near the open door to breath the tropical-storm-drenched Dominican air. The ground was wet, but we saw no sign of any storm. Noel must have already left on its ambitious trek northwards to become the last hurricane of 2007.

The flight back was one of the most uncomfortable pond hops I've ever done. They woke everyone up just after we'd all dozed off to offer us our dinner at 2:00 AM, and then they woke us up an hour earlier than they should have to give us breakfast a few hours later. The plane was packed and had much less legroom than I've had before. As Spaniards are particularly prone to do, the plane erupted in applause upon touchdown in Madrid, and then everyone stood up to get their carry-on luggage way before the "fasten seatbelts" sign was turned off. Right about the time we touched down, our connecting flight to Bilbao was scheduled to take off. Believe it or not, we were only two hours late, but since our connecting flight had been moved up a month earlier, we had no chance.

We were certain that we would have to buy another ticket to Bilbao and maybe even stay the night in Madrid. To save money, we'd booked our Madrid-Bilbao flights with another company, Spanair, and it looked like we were about to get screwed for being such Scrooges. I'm still confused about what happened next. The representative from Spanair gave us, absolutely free, a place on the next flight that evening to Bilbao. As far as I know, the two companies we flew with have no relationship. Spanair had no responsibility whatsoever for our late arrival. They could, very reasonably, have charged us to book the other flight. But they didn't! The answer is, of course, that it didn't cost them anything to move us to the other flight, but still...that they didn't try to get any money out of it still amazes me.

In Bilbao, it was a cold, rainy, October night and we longed for the climate we'd come to know in Venezuela. But it sure was nice to not have trash all over the ground.