The organized excursion was â€œShoppingâ€. It cost 12€ each to be taken on a bus to several shopping centers. When we got there in the morning, all the slots had been taken. Luckily some of our friends were in the same situation, so we decided to share a cab. Alejandro told us the name of the mall and how much the taxi should cost, so we went for it. The taxi to the Sambil Mall cost 25,000 Bolivars. That sounds like a lot, but get this. The sly cabbie didnâ€™t have a 5k note on him, change for a payment of 30k. But instead he accepted 20,000 B plus a one dollar bill. Thatâ€™s how much a Bolivar is worth. My hypothesis from the day before that the country didnâ€™t have any coins was shattered when I saw some 100 B coins in the cab, each worth roughly 2 US pennies. Weâ€™ve started exchanging money on the black market. At first it didnâ€™t make any sense to me how anyone could or would want to give you more Bolivars per euro than the local bank would, but apparently they have channels to take the foreign cash to the foreign country and spend it on goods, where itâ€™s actually worth more than what they could buy with the equivalent Bolivars from the bank. But then I heard that, starting in January 2008, they are changing to â€œStrong Bolivarsâ€ (Bolivares Fuertes), which is just like the current Bolivar, but with three zeros chopped off (which is how Iâ€™ve been thinking about the money anyway). The shops already display things in both prices (e.g. 185,000 B, 185 BF). Somewhat easier than the EU countries switching to the euro. On the black market we get 5,500 Bolivars to the euro rather than the 5,000 B that Alejandro gives us. Itâ€™s kinda fun meeting with people in their car, counting off thousands in cash and making the exchange.

The mall was very nice. It was just as huge and clean as any in the United States. But what the mall had that was really special was a restaurant that our Venezuelan guide, Alejandro, had recommended called El Rancho de Pablo. This was actually El Rancho de Pablo II, since the original was in another city on the island. As soon as we entered the restaurant, we were enchanted. Every table had at least one bottle of 2002 Bordeaux Cabernet-Sauvignon on it. We had lunch with two other couples, so we were at a table for six. When they brought us the menu and a basket of bread, we were delighted, because we could tell that a gastronomic experience like little other awaited us. The lobster was priced by the kilo. 140,000 Bolivars, in case youâ€™re wondering. We ordered a mixed seafood platter and some mussels for an appetizer, and I ordered the langosta a la diabla (deviled lobster?) for the entrée. First they brought out the lobsters before cooking them. They were either dead or had just had their arms chopped off, so there wasnâ€™t much danger. Thank god we got a photo of them, because otherwise youâ€™d never believe how enormous they were. The food and the wine was absolutely fantastic, way better than anything we had on the cruise, and such and enormous contrast from the shit weâ€™d been eating at the hotel that we felt like gods. Marga said that it was so nice to be eating again without being disgusted with every bite. We had five waiters attending to our table, and at least one of them was deaf. There is something to be said for having a lip-reading waiter, I must say. My glass was never completely empty, an occurrence that happened several times each meal on the cruise ship. We vowed to return a few more times during the trip. I cannot convey what a huge contrast it was from the hotel food. Unbelievable. 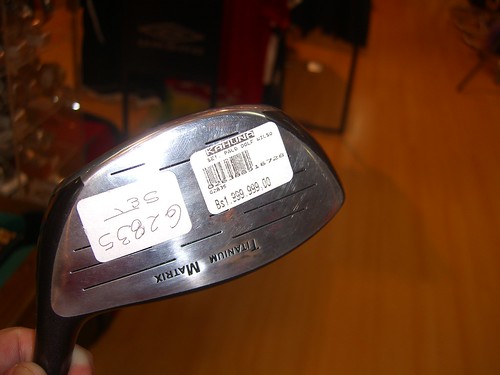 A driver in a sporting goods store for a mere 2,000,000 B. Weak currencies are amusing.

A panorama from my chair at El Rancho de Pablo. They really nailed the "feels like you're outside" atmosphere. The place next door was a sushi restaurant with the "must be the most common" name of Bonsai Sushi. 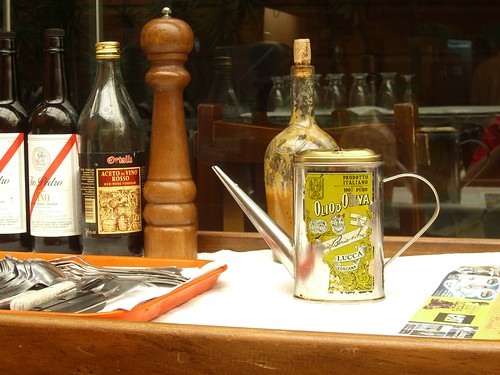 This olive oil receptacle tickled my love for all things quaint and Mediterranean.

One interesting thing to point out about this photo is the red line on the wine bottles. Every single alcoholic beverage bottle on the island, with the exception of beer, has a red line through it. This means that for all the wine they import, they have to remove the original label and print a new label with the line. I know that they do this because all the labels also specifically include the text, "Imported to Isla Margarita. Tariffs paid" or something similar. A strange practice. 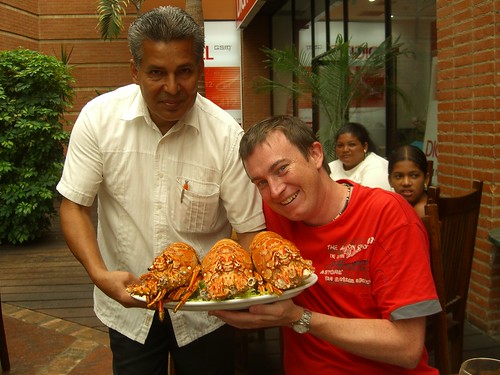 Me and the beasts. 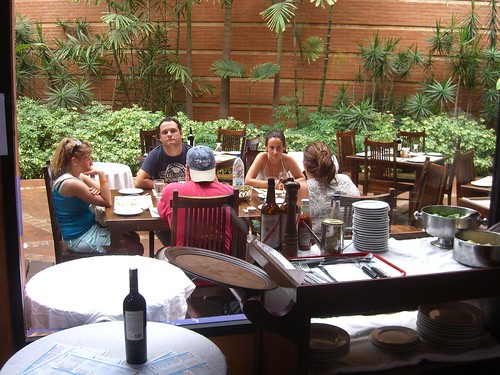 A view of our table from inside the restaurant. 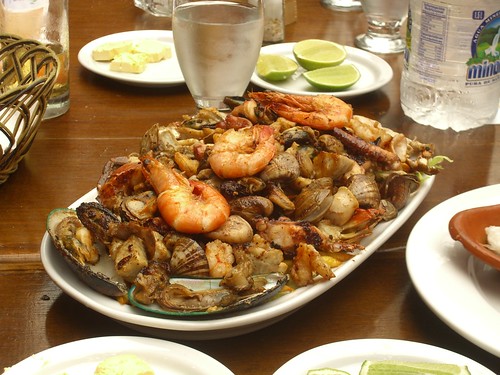 A huge communal platter of seafood for a starter. 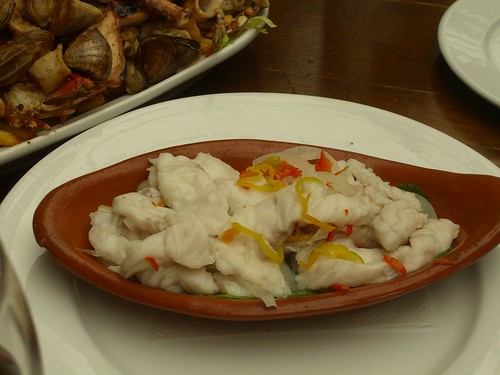 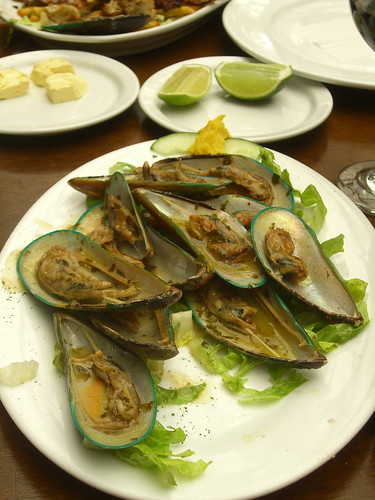 Mussels with lemon and garlic. 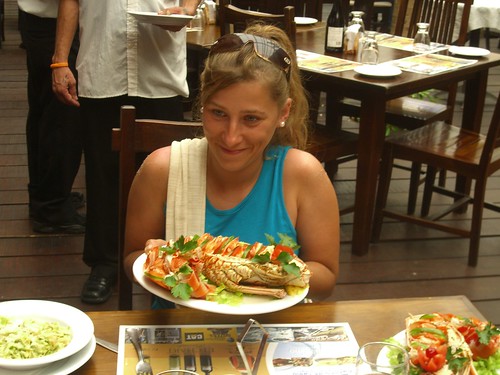 The first happy customer to be served at our table. 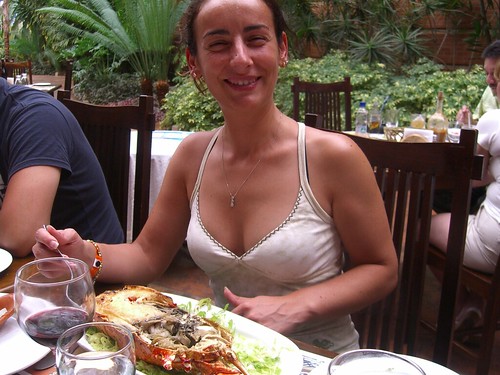 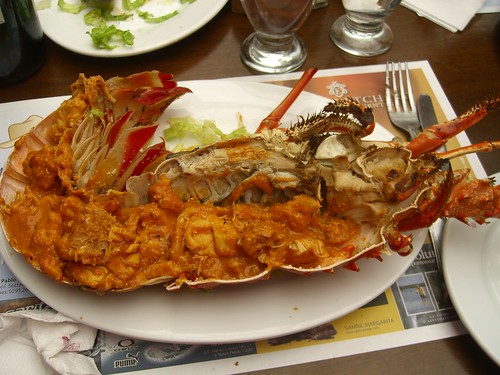 Langosta a la Diabla. Lobster in a delicious, spicy sauce. 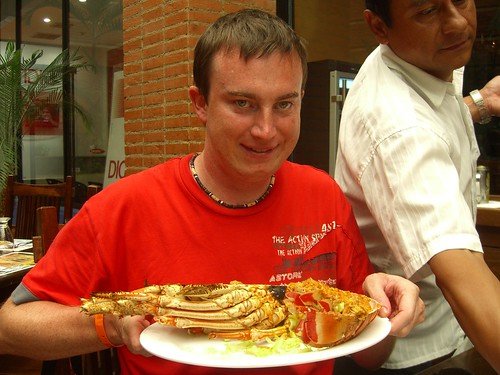 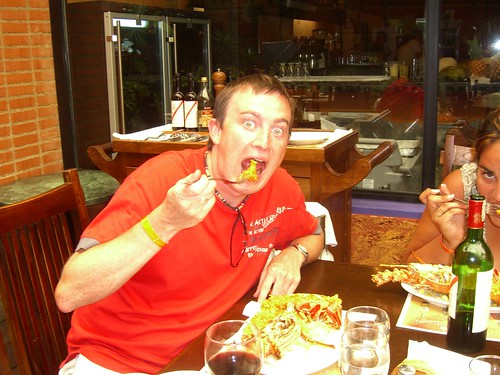 After dinner, Marga and I ordered a glass of sambuca, which is like an anisette that they light on fire with some coffee beans floating in it. And youâ€™re supposed to drink it in one gulp, but I must admit that it took me three. It was my first experience sucking (and chewing) on coffee beans. I was surprised by how nice that was. Then things got a little crazy, and two more were ordered. Marga was the happiest Iâ€™ve seen her in a while, if you know what I mean. With the good food and drink, we were beside ourselves in contentment.

Our waiter and his deaf assistant light our flaming sambucas. 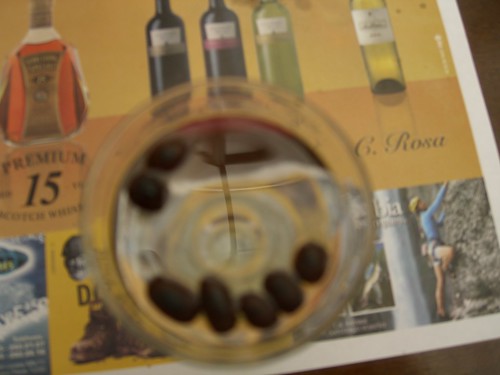 An attempt to photograph an invisible flame. 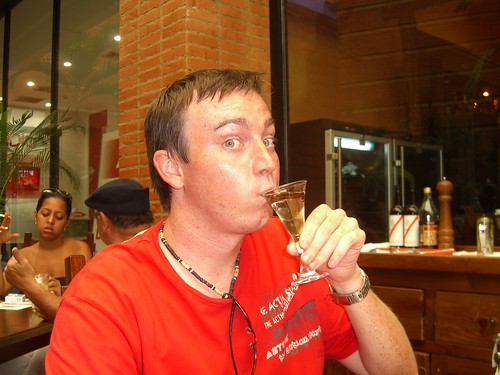 The rim of the glass was quite hot!

The total for the bill didnâ€™t fit in the machine, so it came out as â€œ***,***.**â€, because we went over the million Bolivar mark. Oops. The quality was so good, we didnâ€™t care. After dinner, the others starting talking about going to Harrodâ€™s to buy a t-shirt and have some coffee. They kept talking about Harrodâ€™s, and Marga and I were looking at each other like, â€œAre we in Knightsbridge, London?â€ When we finally arrived to â€œHarrodâ€™sâ€, it all became clear. They were referring to the â€œHard Rock Cafeâ€. Itâ€™s like during the Tour de France when all the Spaniards were talking about â€œAstroâ€, and I finally figured out they were trying, and lazily failing, to say â€œArmstrongâ€. I ordered a Strawberry Daiquiri and later a Margarita Meltdown (which I joked weâ€™d seen earlier with the sambuca). Marga ordered a coffee and later an Appletini, which is an apple-liqueur-based drink served in a martini glass. 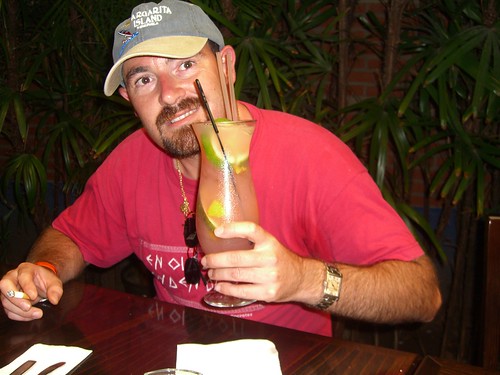 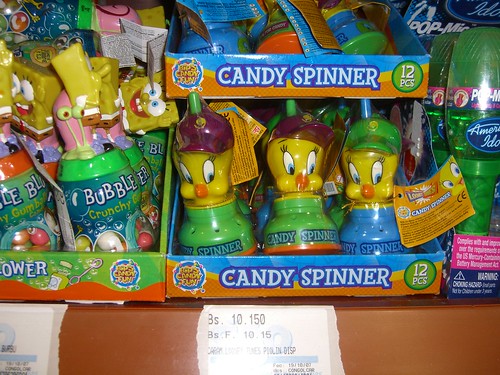 Marga and I left briefly to make a run to a nearby alcohol and candy store to buy some rum. These little "Tweety spinners" caught my eye.

In Spanish, the sound a bird makes is "pio pio!" So Tweety's Spanish name is "Piolin". 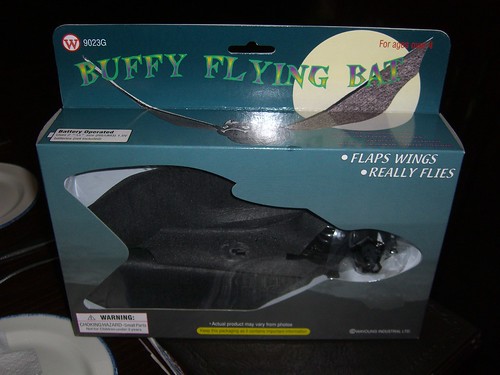 One of the members of our group saw this flying bat toy (I assume it's one of those things on a rope that flies in circles) that he had to buy for someone. Gosh, I wonder why they named it Buffy? 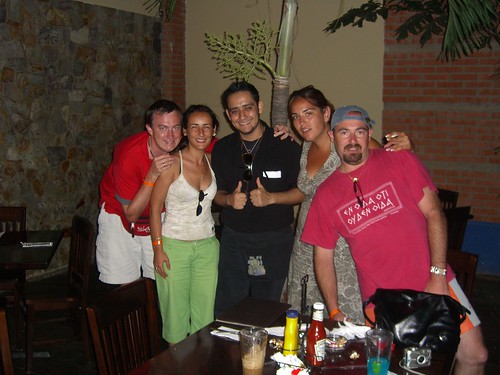 We left the mall after dark and very happy. We went straight to bed, although it was pretty early, and didnâ€™t get up until the next morning.

Up Next: Isla Cubagua!