We were told to have our luggage packed and leave it outside our cabin in the hallway before going to bed the night before. This seemed rather ridiculous when we woke up the next day and realized that we didn't hit land until noon. But oh well. We had breakfast and spent some time out on deck lying on chairs. At 1:30 PM we had to meet in the main lounge to go through Venezuelan immigration and get grouped by hotel for our further stay. There was a lot of bored waiting, and we were finally loading our suitcases onto a bus by 2:15 PM. 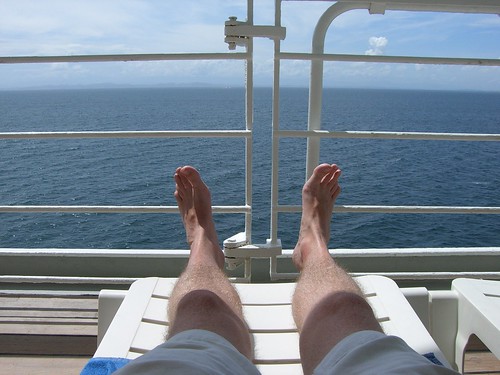 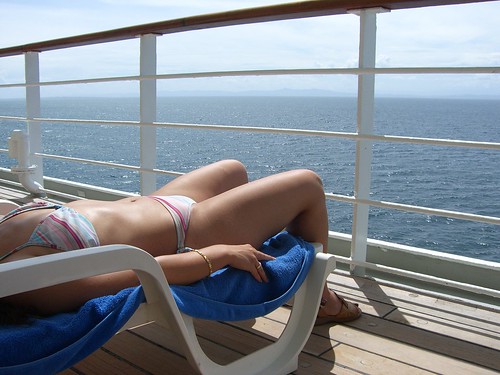 Our last hours on the cruise ship. 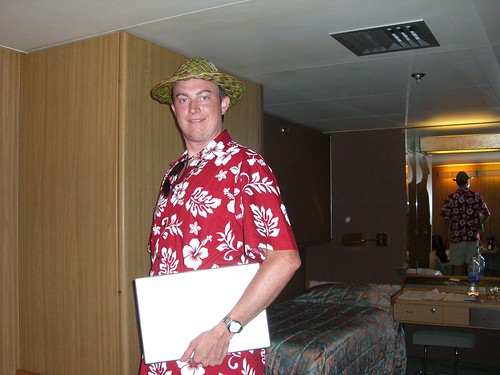 When we move to the Caribbean, this is how I'm going to report for work every day. 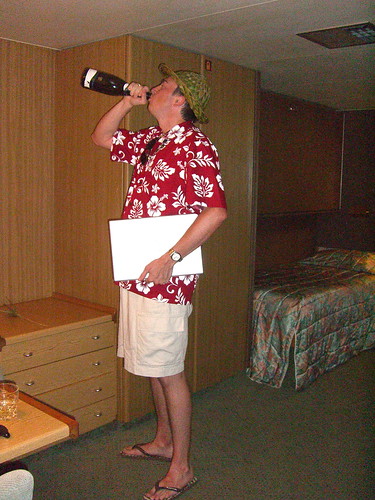 And this is how I'll leave work at the end of the day.

The champagne bottle they left in our room for us due to our "honeymoon" status didn't get much use. Getting drunk in our dark little cabin wasn't very appealing. If we could have taken it out on deck, that'd be a different matter. 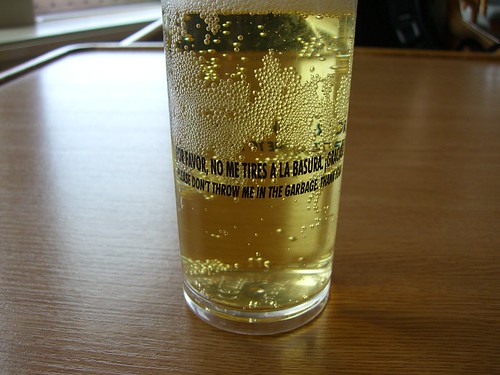 All the glasses used at the bars on the cruise ship had these strange little first person messages on them. 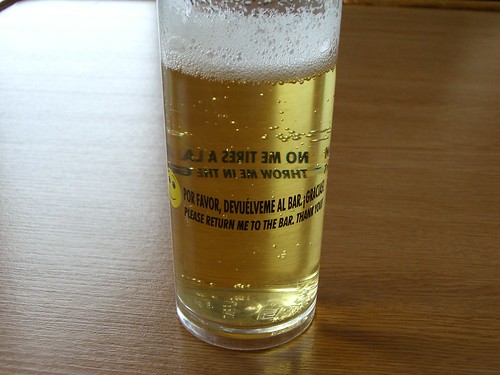 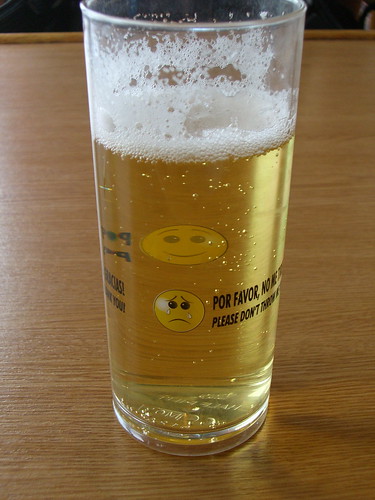 See what happens when you look at a sad face through the effects of beer? 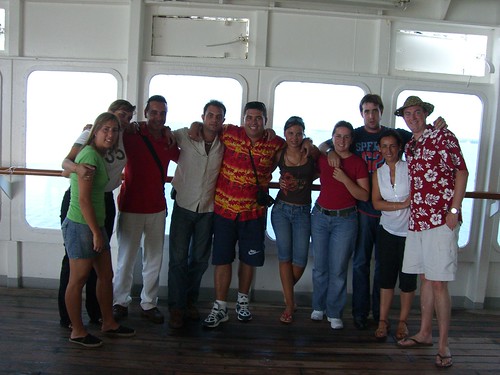 A group shot of our social group on the cruise ship. You wouldn't believe how many tears were shed when we broke up. Some went back to Spain right after the cruise, and others stayed in different hotels in Isla Margarita and we never saw them again until the plane back home.

Some cruise afterthoughts... I went on a Caribbean cruise 8 years earlier with my grandparents and parents and some uncles, aunts, and cousins, courtesy of my grandparents. That cruise was with the Princess company and had to have cost double what our cruise did. So what happened was I spent the entire cruise comparing it to the luxury of my previous experience. My first cruise was full of food that made you go wow. Just about everything about our honeymoon cruise could be described as "Good, but not great." All the food seemed particularly normal, the wait staff was friendly, but often had to be flagged down to refill a wine glass. The cabin was bigger than I expected, but we had to specifically ask for the shower gel dispenser to be refilled, and the toilet seat broke and came off and had to be repaired. The drinks were free, but came in goofy little cups and weren't very well made or consistent in strength. Like I said, it was all "good, but not great". It was Marga's first cruise, and she was very pleased. We'd definitely do it again, but I'd love to show Marga the luxury I experienced with Princess.

When we got off the ship and headed for the hotel, we knew very little about our hotel or what our next week would be like. All our travel agent told us was that there would be a cruise with organized excursions at each destination, and then "a stay" in Isla Margarita. She told us that all the hotels on Isla Margarita were more or less the same and we could choose whichever we liked. The extra seven-day stay only added 200€ per person extra to the full price of our trip. It sure sounded like a hell of a deal. And...well...

At the end of a 45-minute bus ride, in which we were entertained the entire time by a guide explaining things about Venezuela, and particularly about excursions that we could and should take during the week. As we were arriving at the hotel, we pulled into an area that looked extremely "third world". There was trash lining the streets, children riding 20-year-old bicycles in the street. Our guide said, "Okay, we're here!" and we all thought, "Um, where's the hotel and the beach and the luxury?" As we left the bus, we were all looking at each other with stunned, speechless "Oh shit, what did we agree to here?" looks on our faces. We pulled our suitcases over horribly rough pot-hole-filled drop-off area in front of the "hotel" entrance. The receptionist told us that our rooms weren't ready yet, and that they would be ready at 4:00 PM, so we were given "all inclusive" bracelets and sent to a little sandwich bar by the pool. The whole place felt very run down and cheap and a little dirty. The sandwiches were pretty good, at least. We went back to reception at 4:00 PM, but our rooms still weren't ready. Have you ever been to a hotel that doesn't allow check-in until after 4:00 PM? Fifteen minutes later, we got our key and went to our room. Our room was huge, but with a general cheap feel. The furniture, the paint job, and above all, the bathroom was considerably worse that what we're used to at home.

I had expected at least as much luxury as we'd had during the cruise. I was expecting a week of a short walk down to the beach and lots of reading books on the beach and drinking daiquiris. Instead we'd taken a huge step down. We went back to reception and found a pile of steaming Spaniards. They were all really pissed off at the quality of the hotel. The truth is that we had been lied to considerably. Unlike the others, Marga and I realized that A) we really had paid a very small amount for the hotel and shouldn't be surprised, and B) getting upset about it will only ruin the week for us. Our guide showed up and expertly handled the steaming Spaniards. He had clearly done this every week for a while now. He said that he could upgrade us to another hotel for only 100€/person for the whole week. We asked if it was better, and he said it was substantially better, and that he'd make the upgrade. I later found out that every single one of the 16 couples the previous week made the upgrade. How ridiculous is that? When we realized that "the other hotel" was the one next door and didn't look any better, we decided to stay.

Our guide, Alejandro, finally got us all calmed down a bit and gave us another overview of the excursions. We also exchanged some money. The currency in Venezuela is the Bolivar. One dollar is worth 4,000 Bolivars, and one euro is worth 5,000. We exchanged 100€ and walked away half-millionaires.

After the meeting, we decided to leave the negative atmosphere of the griping Spaniards and we took a little walk around town, trying to find a laundromat. The streets were full of garbage and people hanging around doing very little. The irony is that one of Marga's biggest fears with the cruise and hotel stay was that we wouldn't get a chance to see how people actually lived in the country. And here we were in the middle of it. We saw some women cooking with stoves out on the porch. Since it doesn't rain much and is always warm, why not? Some people were sitting out on the curb with plastic plates eating their dinner. It was very enlightening. On our way back from the located laundromat, we stopped to chat with some children playing in the street. They explained that they were playing some card game. Another guy came and chatted with us for a bit, pleased to see that we responded "Hola" to his "Hello". As we approached the bright lights of our hotel complex, we began to understand the level of luxury we really had. Luxury is all relative, you see. I was disliking the cruise because I was comparing it with a more expensive one. But after seeing the hotel, the cruise seemed incredibly luxurious. And we were disliking the hotel because we were comparing it to the cruise, but after our walk we had gained new perspective. 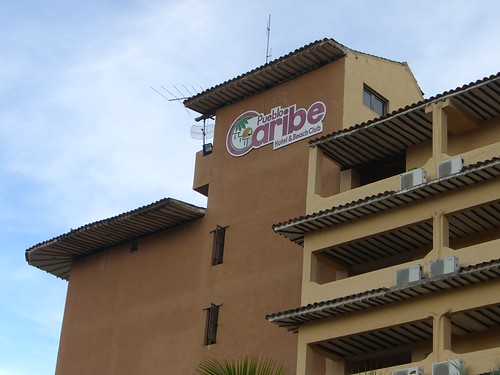 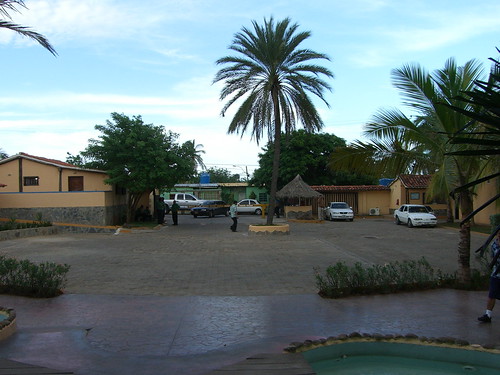 The entrance to the hotel. 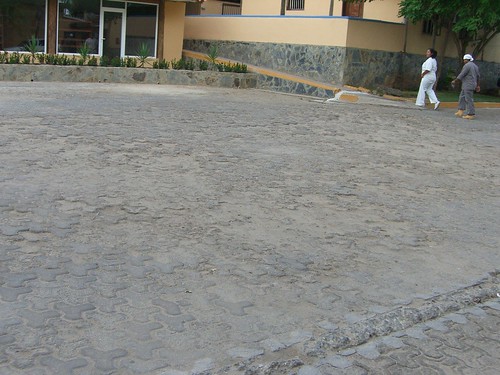 The horribly cared for paving inside the hotel gate. 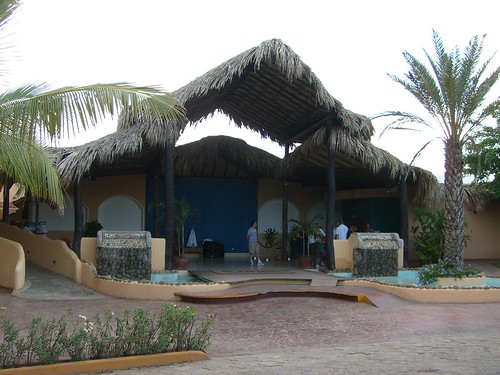 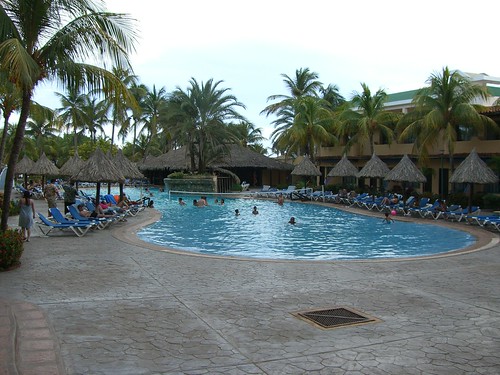 The swimming pools were the only things that appeared in the literature advertising the hotel. For a reason.

A panorama showing the garbage lying all around just outside the hotel. What slobs!