Again on the second day, our clocks were still off, and we were wide awake at 5:00 AM. We figured it'd be silly to miss another Caribbean sunrise. And it was a good thing that we didn't, because we saw a beautiful sunrise including a pretty cool atmospheric phenomenon. 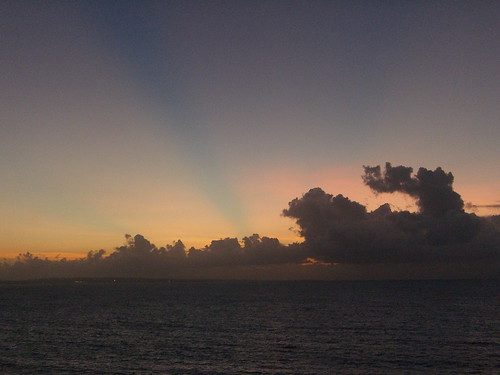 I was so pleased that the crepuscular rays were captured by the camera. At least I think these are crepuscular rays. What's odd about them is that it's only the anti-ray (shadow) lines that are visible as the blue streaks. 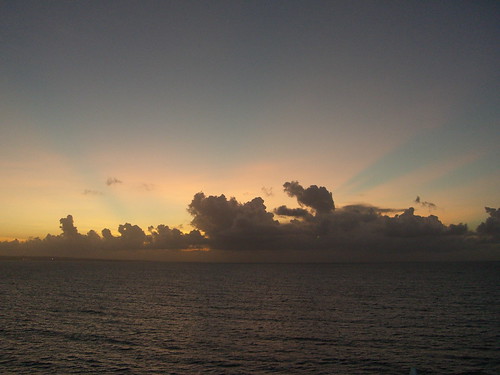 I looked so hard for signs of anticrepuscular rays, which are an extremely rare phenomenon, but there were none to be found on the western horizon. 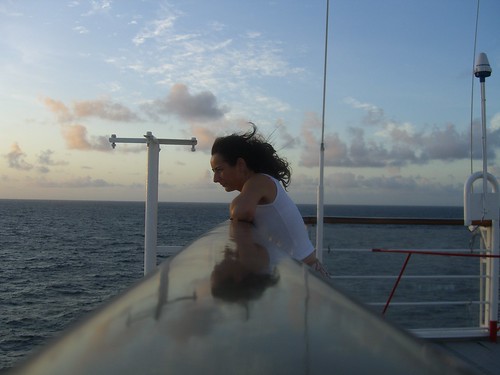 I love this photo. The wind out on deck when at sea was so strong it was hard to breathe. It had to be at least 35-40 mph. 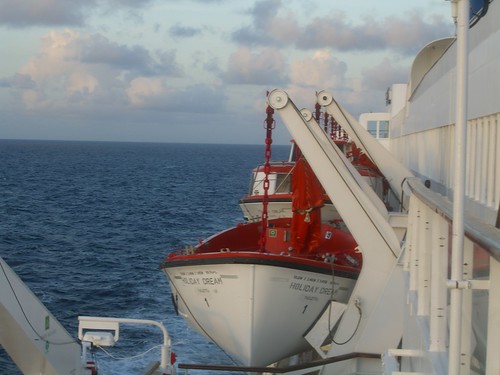 We were too late to sign up for an excursion for the second day, so we went on our own to a nearby beach. The woman at reception said it was 20 minutes walking, but it took us 40 going at a pretty good pace, so I donâ€™t know what she was thinking. The beach was simply idyllic. We were the first ones there. Upon our arrival, a local gentleman offered to rent us two chairs and an umbrella for 15 USD for the entire day. We accepted. Our chairs were 5 meters from the crashing waves. We were there for 4.5 hours and saw no perceptible tide change. The sand was perfectly white and the water was a beautiful turquoise. We went immediately into the water and then came out to lie on the chairs. I was a little concerned that we might get bored without any books to read, but I turned out to be wrong. There was a constant train of black Caribbean fellows coming to try and sell us stuff. Some wanted to take us in their boats to snorkel with the turtles (for much less than the cruise excursion offered), some wanted to let us snorkel in a shipwreck. Others had jet skis and other water toys to offer. And yet still more walked around with briefcases full of shell and stone necklaces. We were the first ones on the beach at 10:00, but soon more people arrived, almost all from the United States. The currency for all transactions I saw on the beach was US dollars. Barbados has their own dollar that is worth 0.50 USD.

As the day wore on, I kept chatting with the local vendors. Eventually a jewelry guy offered me a pretty nice necklace for $10. I talked him down to $5 and bought it. Then, a fascinating fellow came along who calls himself â€œTrevor the hat guyâ€. He makes hats out of a single palm tree leaf. He had several to display. He first said that they cost 20 USD, but that, since he hadnâ€™t sold any yet, heâ€™d offer me one for half price. They were pretty cool. He showed us one that was 15 years old that had turned brown, but was still springy and maintained its shape. I said that $10 seemed like a lot, so he offered to make one for me right before my eyes, custom fit to my head. Marga said to me in Spanish, â€œOffer him five.â€ I said Iâ€™d take one for five, and he said, â€œLook man, I can do it for eight, but you gotta keep quiet about that price.â€ I hesitated, and he said that heâ€™d â€œmake a little bird for the lady, tooâ€. Before I agreed, he whipped out a strand of palm leaf, cut it into strips and began making a little bird, identifying to me the wings and tail as he made them. It was pretty darn impressive. He said his grandfather had taught him to make hats and that heâ€™d been making them for 20 years, and it was his only job. The hats were pretty darn unique, so I agreed to $8 if he made it for me. So he pulled out a huge palm leaf from his knapsack, put it around my head, attached one part of it together with a paper clip (the only non-palm-leaf item involved) and went to work. As he was doing it, several other Americans approached and asked how much for a hat. I kept quiet and Trevor said they cost $15. One lady talked him down to $10 and took one of his pre-made hats. Trevor kept working for 10 minutes on my hat. It was pretty fascinating to watch him work. While he was doing it, he told us a story of a guy that had found him recently. The guy had shown him an old brown hat that Trevor had made for him 17 years ago, and it was covered in those little flag tie-clip-like pins from various countries. Trevor said he was pretty touched by this. I promised to return in 17 years and look him up. He assured me that heâ€™d still be there and to ask for Trevor â€œthe hat guyâ€. He finished the hat and made a little fish thingy to stick in it. It was a pretty neat experience. Walking back to the boat, several of the local drivers saluted me in a way that I donâ€™t think they would have done if I wasnâ€™t wearing a silly hat. And I didnâ€™t think I could stand out any more as a tourist.

Barbados is much more modern and less foreign than Grenada was. They are part British, speak English, and drive on the wrong side of the road too. But the country feels a lot richer.

Upon returning to the ship, I became aware that I was pretty severely sun burned, despite spending so much time under the umbrella. At lunch, we were seated with some other couples that we sort of knew from the flight over and other meals. They are all Spanish, all on their honeymoons, and all a few years younger than us (80â€™s kids). Thereâ€™s Diego and Jessica, Sergio and Eva, and Vero(nica) and Jose. We had sort of been wondering what it was about us that was repelling people. It seemed that everyone else had already had a group of friends that they were hanging out with.

So far, weâ€™ve seen both sunrises on the boat. The first night we couldnâ€™t even stay in the restaurant for dessert because we were so tired. The second night, we changed our meal sitting from the second (of two) at 10pm to the one at 8pm. When we did it at 8:00, we were expecting to return at 9:00 for dinner, but they seated us immediately in our new table. When we got back to the room, Marga wanted to lie down for â€œjust a bitâ€. I knew this was dangerous, but I lay down too. We woke up at midnight and decided it was too late to do anything social on the ship, so we changed out of our nice clothes and went back to bed. So of course we were up at 5:00 AM to take a walk around the deck and see beginnings of the 6:00 AM sunrise. 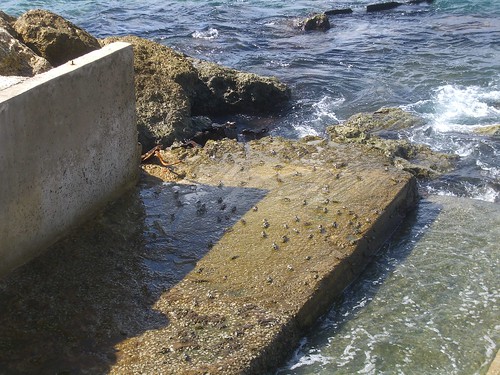 On the walk to the beach, we passed this runoff of fresh water into the sea. See all those little things on the rocks? Those are all crabs, running back and forth. Zoom in. 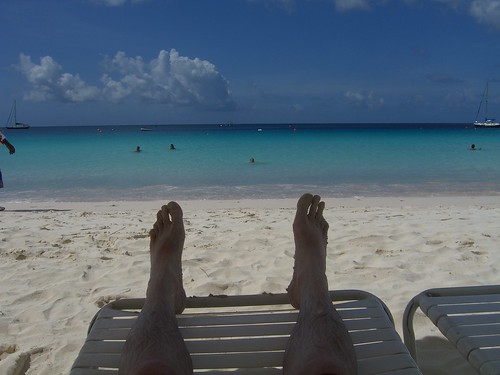 Now this is the life! This is the view that I want when I raise my eyes above my laptop screen. 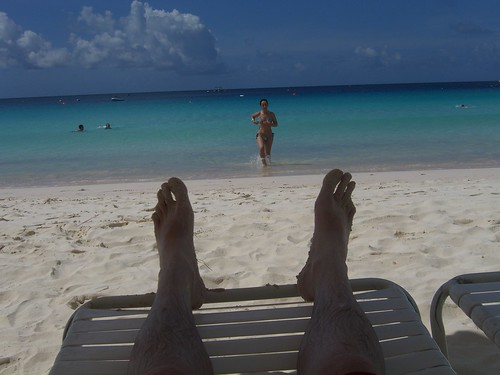 Just when I thought the view couldn't get any better, my new bride climbs, dripping, out of the crystal clear Caribbean water in a bikini. I'm in heaven! 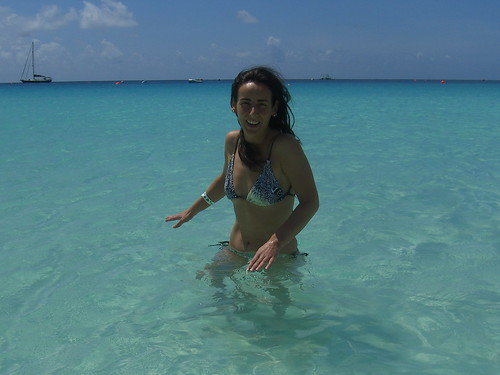 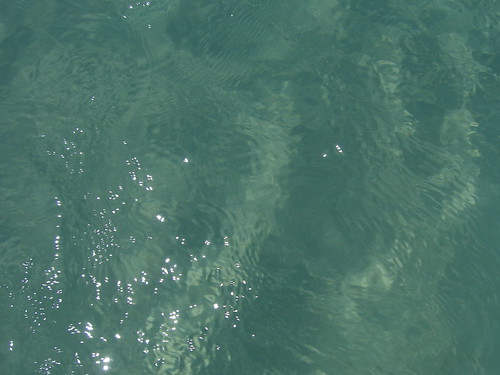 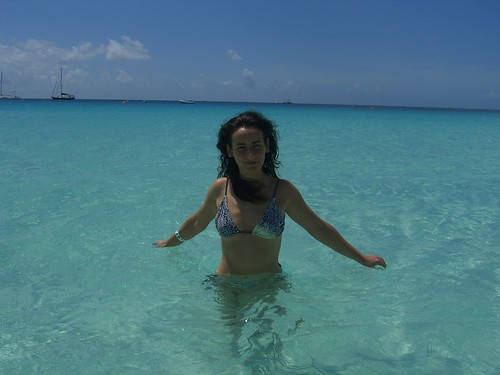 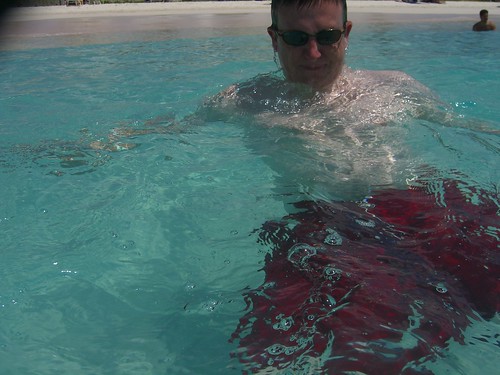 There were some pretty funny looking tourists there. 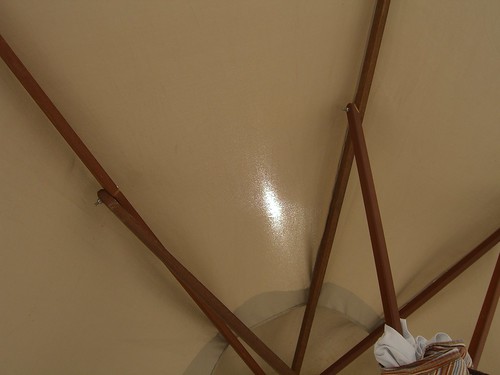 The sun shining through our beach umbrella. 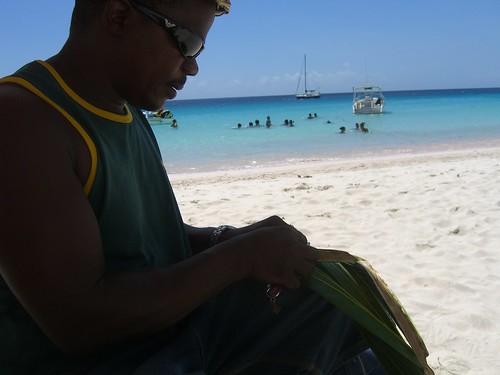 Trevor's a weaving machine. The person he's talking to was the obese black New Yorker lady. 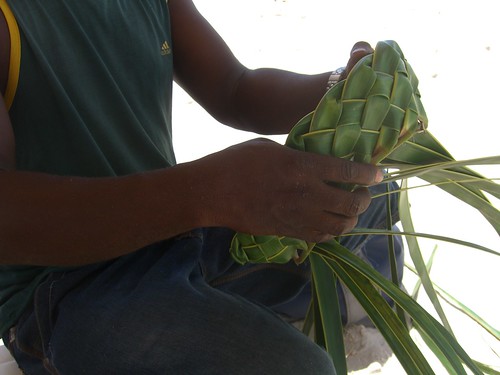 The brim completed. Brim is a cool word. 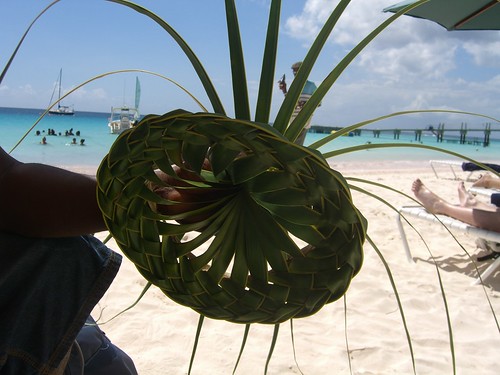 This is a super shot. 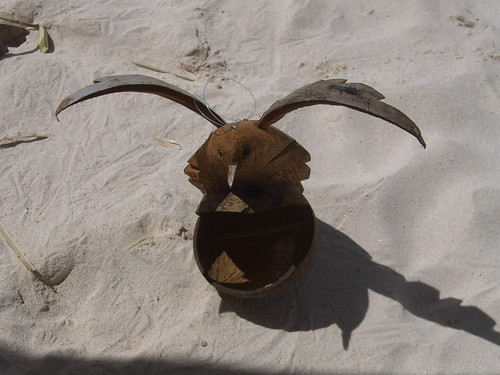 Meanwhile, another guy came buy selling his coconut art. All his pieces were made from one single coconut. The wings come off for easy suitcase packing. We don't have a place for a bird feeder, so we turned him down. 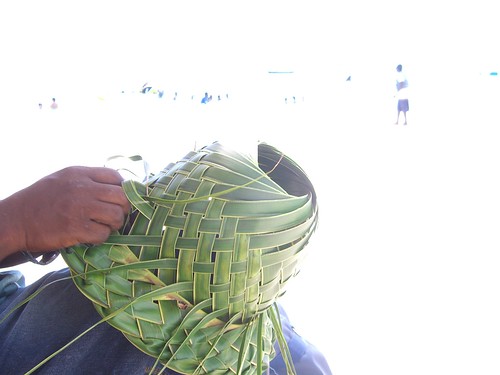 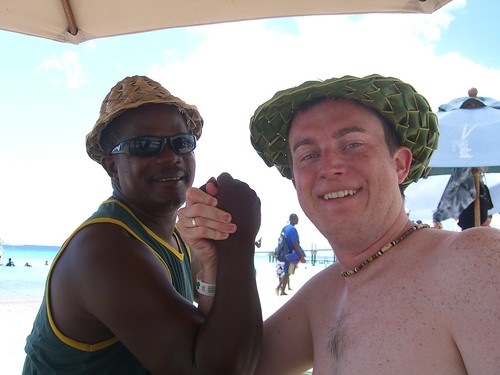 Trevor, the hat guy, and a happy customer. 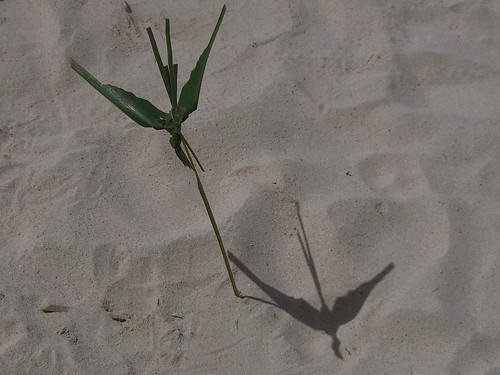 The bird he made for Marga. 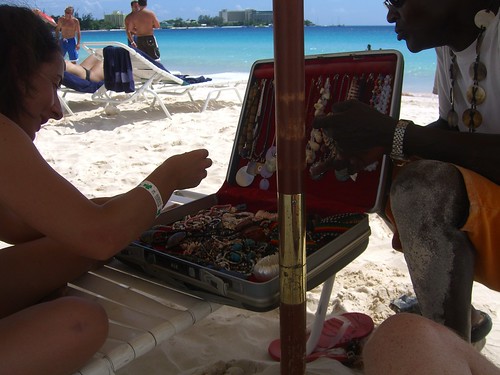 Yet another necklace vendor. Marga's a tough customer.

A quick note about the lack of tidal movement near the equator. I like to think that I'm fairly informed about how the tides work. But it doesn't make any sense to me why the tides wouldn't change at least as much at the equator than they do up north (or down south). Can anyone offer a theory on this?