On the Sunday after the wedding, October 14, we spent the morning saying good-bye to departing American guests. Then my new actual in-laws picked us up at the hotel to take all of our luggage to their house. I recall sitting for several minutes at a time with my father-in-law in the living room in a silent stupor, staring blankly at a turned-off television, with an occasional comment about how well everything went bubbling to the surface. After a much-needed shower, we headed to the Centro Extremeño to meet with the in-town relatives, and some of the Spanish relatives that had come up from Extremadura for the wedding, to consume the mass quantity of leftovers. Through some communication error or just refrigerator size, the extra paella had been left out and was no longer edible. But there was plenty of other ham and cheese and tortilla to be nibbled on. I must say that the tortilla (potato omelet) provided at the wedding party was the worst I've ever had. It was burned and the unburned parts were unflavorful. I certainly hope that none of the non-Spaniards took that experience away as the archetype tortilla.

The conversation at lunch revolved around fresh memories of the wedding. The sentiment from the Spanish side was similar to that from the American side: what a nice bunch of people that it's a pity we couldn't talk directly to. There was a special fondness for the more charismatic, extroverted Americans. My aunt Diane was recalled to have done a lot of dancing and repeated "muy bueno" (very good) to several people, obviously struggling to show her appreciation for the event. Marga's aunts each had stories of the hundreds of kisses and smiles received from Debbi. The men were enamored by Tom's apparent ability to drink strong alcohol. One guy said, "The godfather would come up to us at the bar and hand us an empty glass and stare at us expectantly until we ordered him another. And then he'd go away and come back a few minutes later. Amazing!" The women all agreed that my mother had dressed very elegantly, and that it looked like my grandmother had had a good time. I'm sure that same sort of stories and comments were exchanged among the Americans dining in Bilbao. It was all positive, from what I can tell.

Back at the in-laws, Marga started packing her suitcase. Mine was already fully packed, so I watched some television with Juan. Marga left to go say thanks and good-bye to the neighbors. Eventually, Belén and Gorka showed up walking her dog, Tico. They sat with us for a while. Then, all of a sudden, Belén exclaimed, "I'm going to try on the dress!" It soon became clear that there was a lot of pent up jealousy from watching her sister try on dozen after dozen of wedding dresses, and Belén not getting to try on even one. She grabbed the dress and ran into her parents bedroom to don it.

Belén's body type is nothing at all like Marga's. Although she weighs less, Belén is somehow wider than Marga is, so the dress wouldn't quite attach at the back. But she put on the little vest thingy to hide the back and she looked pretty nice. After staring at herself in the mirror for a while, she called into the next room, "Gorka, sweetheart, I wasn't really interested in getting married, but the more I look at myself in this dress, I'm starting to change my mind." Poor deer-in-headlights Gorka came out of the living room and stammered some of the "Yes, honey, you look very nice," rhetoric that all men can spout on queue. Being in the house of your girlfriend's parents, the day after her sister's wedding, with your girlfriend in a wedding dress, and her parents standing around praising her has got to be a horribly uncomfortable situation. Gorka handled it well, I thought. 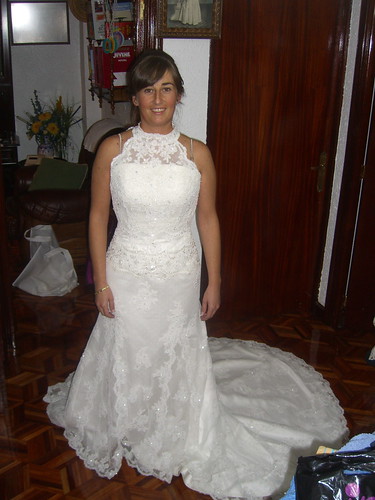 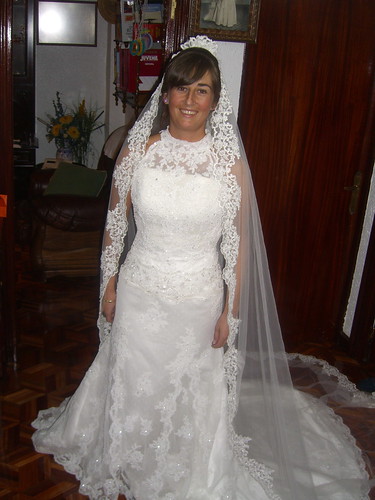 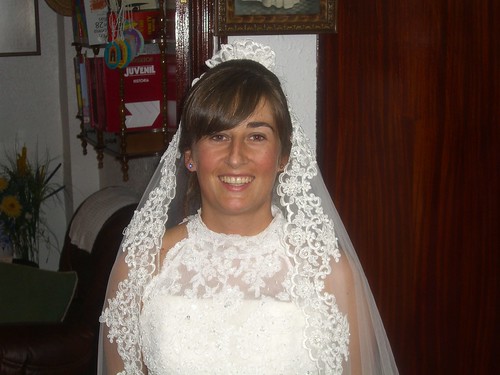 Belén is much more photogenic than Marga. 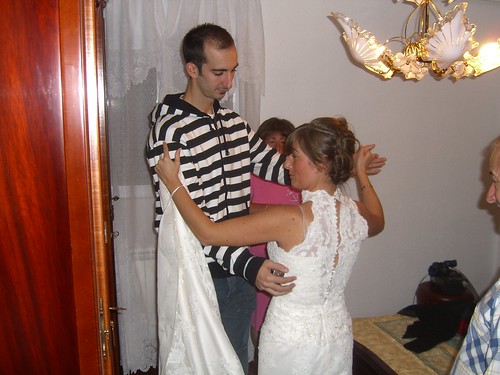 Poor Gorka forced to participate in a wedding fantasy.

Marga returned just in time to see the dress on her sister before it was boxed for life. She wasn't at all angry and was actually rather happy to get to see her dress on someone else to admire it from a different perspective. It was agreed that the dress could obviously not be used by Belén, but that the veil, which cost about 80% of what the dress cost, might be reused.

After that, we finally got around to opening the big inflated condom that Marga and I had found on our hotel bed the night of the wedding. It had apparently be placed there as a gag gift from Belén and Aunt Marga. Its main contents were Adam and Eve costumes. With Belén's pushing, we agreed to try them on over our clothes. 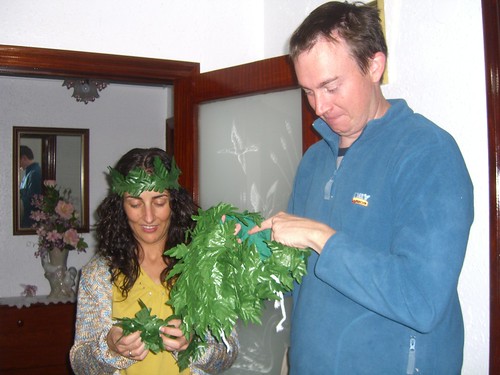 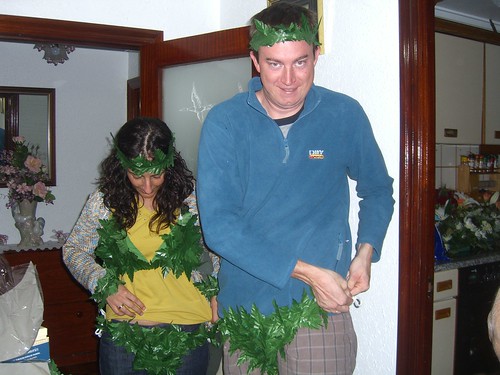 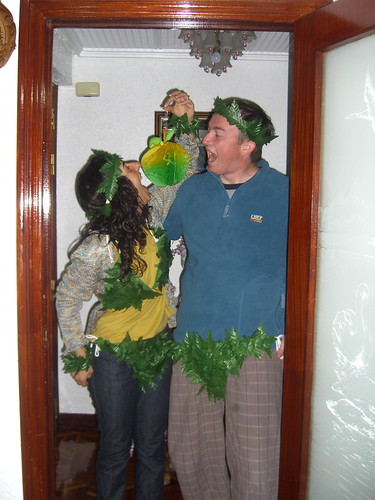 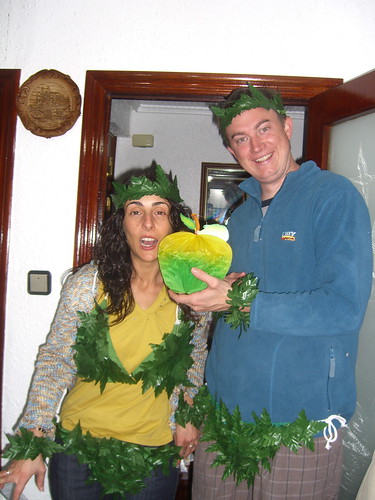 Later, in the Caribbean, we regretted not having brought these costumes to wear on the beach.

Soon it was time for bed, and seemingly before I could shut my eyes, my alarm was going off telling us to get up and go to the airport. As I kind of suspected we would, we found my parents and grandmother wandering aimlessly at the airport, several hours early for their flight. There was more hugging and goodbyes. And then there was even more after we'd made it through security and found each other again. I reached in my bag to get my camera to show my parents the photos of Belén in the wedding dress. But I couldn't find my camera!! I, Erik, the photo-heavy blogger, had left my camera at home while leaving on a trip to the Caribbean!! Marga looked at me with a, "God, I married an idiot!" look on her face. I said, "Well, I guess we'll be camera shopping in the Madrid airport." Then, my mother remembered that she had her old camera (actually newer than mine) that had been superseded by a new one for the wedding trip, plus an extra battery! What a life saver. So she gave me the camera and we said a final goodbye and headed for our gate.

In Madrid, I was digging in my backpack for my iPod, and I ended up finding my camera. What I really did not have, however, was the charger for my camera battery. So having my mother's camera, and extra battery, really came in handy and we returned with more and better photos than if she hadn't given it to us.