For years now, I've been told what a shame it was that I've been missing Maritxu (mar-EE-choo). Maritxu is a huge party in Mondragon held on the first Friday of October. Since moving to Spain 2.5 years ago, I've been out of the country for Maritxu in both 2005 (golfing in Scotland) and 2006 (New York City). Maritxu is a very young festival, by European standards. It began small in 1977 and has since grown to a size where people drive several hours to attend. This gist is this: everyone dresses very elegantly, as if they were going to a wedding. At a certain time in the evening, they gather in one corner of the town square and sing a song in Basque to a statue of the Virgin Mary on the corner of the central town church. Then the virgin performs a "miracle". Marce, my mother-in-law, told me that once the public water fountain next to the virgin started giving wine. Once, the virgin turned around in her little box and when she came back around, she was dressed like a bullfighter. Another time, 1000 peseta (6€) bills rained from the balconies above. Every year, it's something different. Then, in jubilation, the crowd sings, in Spanish, the wonderfully patriotic song, "Se quema Madrid" (see video below). The rest of the night (and I mean until the sun comes up) is spent partying in the bars and street, with everyone dressed very elegantly.

Marga explained that -txu is an endearing diminutive suffix in Basque. So "Maritxu" is sort of like "Little Mary".

When we arrived in Mondragon, it was foggy and raining. We got dressed and went down to see the singing. Marce and I got there first, and she suggested that we get right up against the barrier to "see better". When Marga and Belén came a few minutes later, Belén told us that if we were that close, we'd almost certainly get hurt or burned by the fireworks. So we backed off. We ended up waiting there for 30-40 minutes while the street filled up with people.

I certainly wouldn't call myself agoraphobic, but I really dislike being in a situation when I'm physically pressed up against other people. My tolerance for this is particularly low when I'm stone cold sober, like I was on Friday night. To deal with my discomfort, I decided to watch and evaluate how uncomfortable everyone else was. No one likes being pushed. It was particularly interesting to watch someone trying to move from one place to another, thereby pushing other people around to make a path. From the person in motion, a compression wave of animosity would radiate out like the wake of a boat. Moving person pushes person A, who gets upset, but before they can get too upset, person B, who person A bumped into, starts bitching at person A for pushing them, but then they're interrupted by person C on the on their other side, etc. etc. etc. Everyone was really as miserable as I. In the front, there were some teenagers that thought it would be fun to annoy people and start what are called avalanchas, forcibly pushing people around just to annoy. See video below:

This was the environment I was in when my colleague, Alan, called my cell phone from work. It's usually some kind of emergency when such a call is made, but I was unable to hear anything he said, and unable to do anything to help him even if I could. He described what he heard as, "It sounded like you were in a room of a thousand people who were told to scream as loud as they could." Pretty close.

Just before the event began, some Basque separatists used the opportunity to make a political statement. It's pretty annoying to have your presence somewhere be exploited to make it look like you support a cause that you don't. They knew there would be a crowd, so they took the opportunity to hold up posters saying "PSOE Facista". The PSOE is the current governing party in Spain. They're the more liberal of the two main parties (the S and O stand for "socialist" and "workers"). I suppose from the point of view of separatists, the government you're trying to free yourself from would seem fascist. Everything is political in the Basque country. Apparently, earlier that day, there was a demonstration in Mondragon with police firing rubber bullets at the protesters. Glad we missed that. 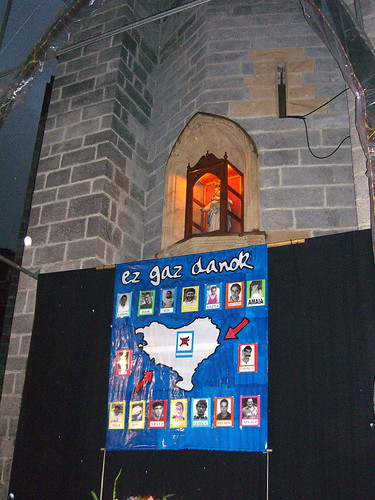 Belén told me that the sign reads, "We aren't all here." The photos are often seen around Mondragon. They are the ETA terrorists that are in prison for, well, terrorism. The shape is that of the Basque Country. 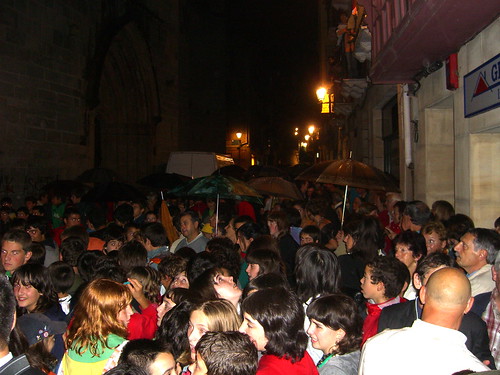 I remember when I first came to Mondragon. One of my first thoughts when in a packed bar looking around at people was, "So this is why the Spaniards I knew in Denmark were so amazed by all the 'exotic' blond women!" 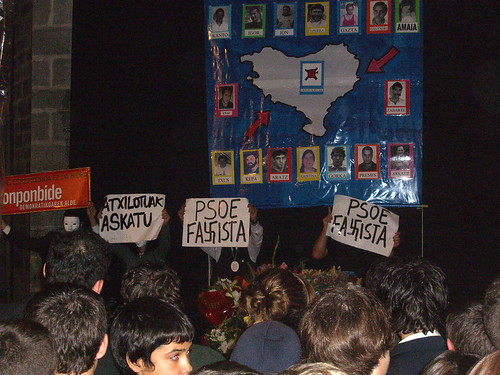 Yep, not much difference between 21st century Spain and Nazi Germany. Dumbasses.

Finally, the event began. Marga and Belén assured me that normally the crowd sings better and more in sync with each other. This year, the "miracle" was extremely lame. They threw little postcard-sized pieces of construction paper, each with one of "the seven wonders of Mondragon", a list which included a bridge and a round-a-bout. After singing the regular song, you'll hear them singing:

"Se quema" means "burns". The rest you can figure out. Marga and family insist that the song is lighthearted and they don't really mean for Madrid to burn, but I think it's a little inappropriate. Even if it's supposedly not taken literally, the separatist cause is still being supported.

After escaping the mob, Marga and I had to drive to the wedding restaurant to drop off a paper with information about table seating. When we returned, we found Belén and her friends. They had invited us to go up into the mountains with them to an old stone house that one of their families owns and have dinner. This is a fairly common practice. The food had been bought at a caterer and left in the house. When we got there, we warmed it up and had dinner. At 2:30 AM we returned to Mondragon and Marga and I decided to call it a night, since we had lots of wedding-based errands to run in the morning. Belén headed out for more. 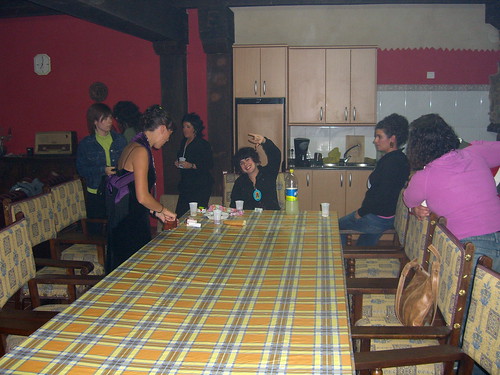 Belén's friends cleaning up after dinner. 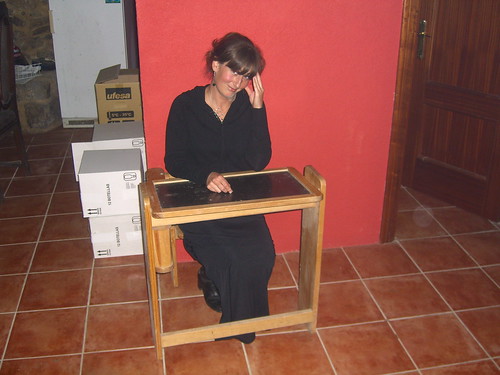 Belén pretending to study at an old student's desk in the old house. 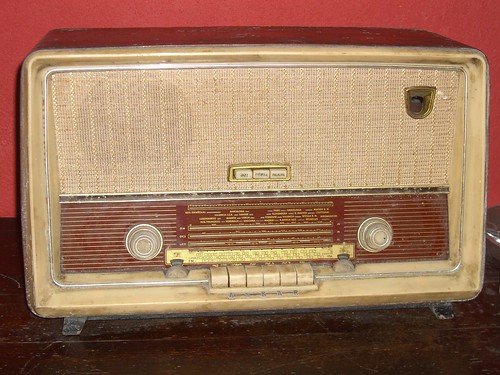 I loved this old radio. If you look closely, there are parts of the dial for various cities. 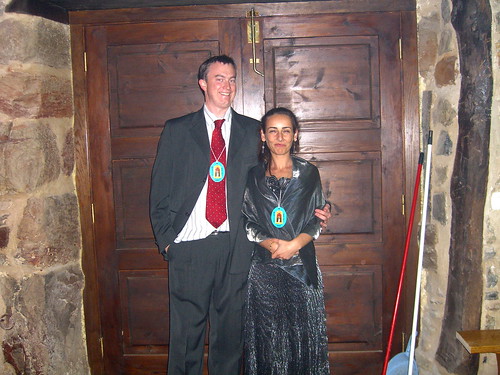 Part of the Maritxu experience is buying a piece of paper to wear around your neck that says "Maritxu 2007". I've seen these lying around Marga's folks house for years. 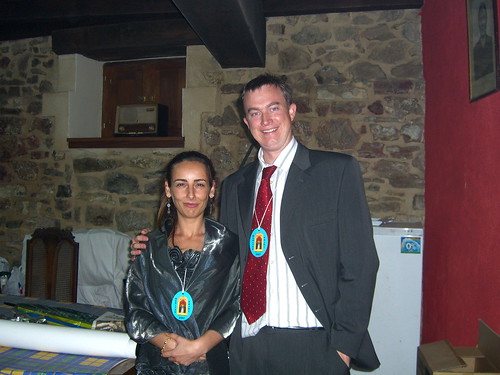 And, as far as you know, it's a custom to untuck your shirt on one side. 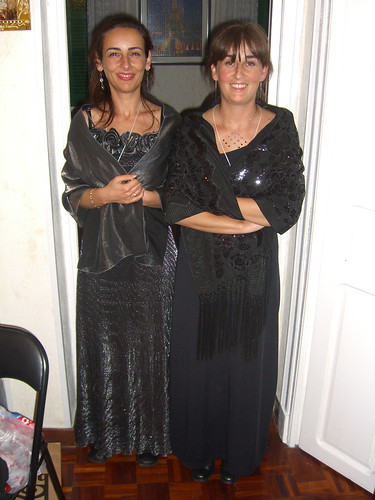 Marga and Belén, back at Grandpa and Belén's house. I've seen several years' worth of Maritxu photos posed in this doorway. 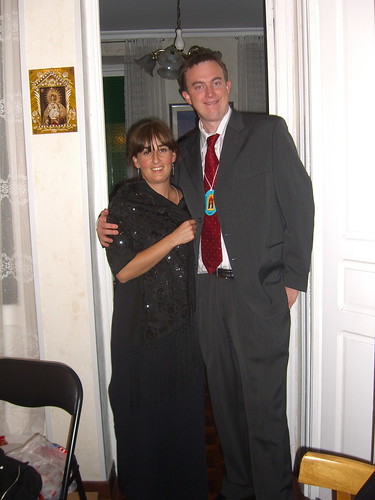 Ever since learning the word for it, Belén has stopped calling me by name and now calls me "brother-in-law" in English. It's cute for now.

In the end, I wasn't very impressed with this Maritxu festival, particularly after the years of build-up it received. According to Belén and Marga, we didn't really "do it right". You're supposed to go out for drinks early, not stand so close to the virgin, and party harder. 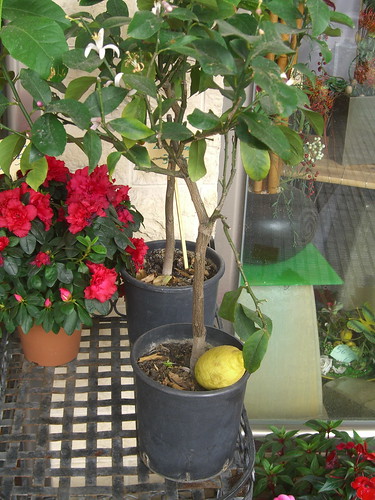 This dwarf lemon tree was at the flower shop where we're buying the wedding flowers. Pretty crazy, huh? 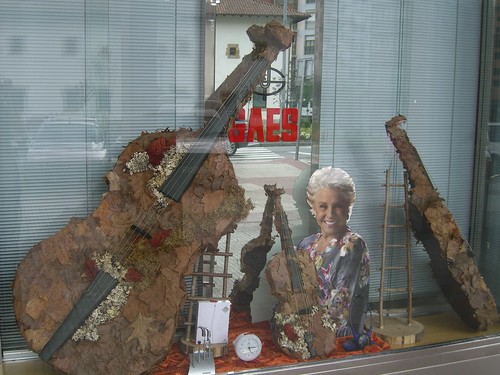 These string instruments made from leaves were in a nearby shop window.

The next morning we went to talk to the priest that will marry us. We got to the church at 11:00. We pushed on the door and walked inside. It was completely empty. There's something a little creepy about being in a space that large all alone. We went back to the street and called the priest.

Marga: Sir, my name is Marga, we had agreed to meet at the church this morning. Priest: Oh, right. I forgot all about that. Marga: We're here now. When should we come back? Priest: How about 12:30? Is 12:30 okay with you? Marga [very deferentially]: Whenever is best for you, sir. Priest: Okay, let's make it 1:00.

From what I can tell from meeting the ones in Colindres and Mondragon, the priests in Spain have such a high level of job security that they have become incredibly lazy (isn't that a deadly sin?). This guy couldn't care less that I wasn't Spanish or Catholic. Hey, man, as long as you've got the paperwork done, I don't care who you are. He warned us that we'd better not be scamming him, like some Nigerians tried to do last year. It's always the Nigerians, isn't it? Apparently they have a marriage crime ring where you can rent a woman to come be your bride at a wedding to help falsify immigration papers. He rambled on about that for a while. In the end, the most important rules to him were those that, if not followed, would cause him extra time or work: 1) Be punctual. We have to be walking down the aisle at 13:00 sharp. 2) Tell people not to throw rice until you're way out into the plaza, so that he doesn't have to clean rice up from church property.

I have about 9 errands to do today. Two of them include getting my eyebrows and the car waxed.