We have purchased the gifts we will be giving to our male wedding guests. It should be a particularly nice gift for those guests coming from the United States, since it is something that they are prohibited from buying in or importing into the United States. This post has a soundtrack. Press play below before continuing.

According to Wikipedia, on February 7, 1962, John F. Kennedy ordered his press secretary to obtain one thousand Cuban cigars. Upon the arrival of the cigars the next morning, Kennedy signed an embargo to prohibit the importation of Cuban cigars into the United States. As of 2007, the embargo remains in place. It's good to be king, huh?

We had the option to get Dominican or Cuban cigars. I said that, from an American perspective, there was no doubt which one to choose. The Domincans are probably just as good, but there's nothing sweeter than forbidden fruit.

We ordered three boxes of 25. At the moment, we're expecting 100-105 wedding guests, half of which will be male, so we should have a few left over. I'm going to do my best to make sure that the Americans can smuggle a few extra back with them. According, once again, to Wikipedia, "small quantities [of Cuban cigars] can, in practice, be brought back without trouble from US Customs if the bands are removed prior to crossing". 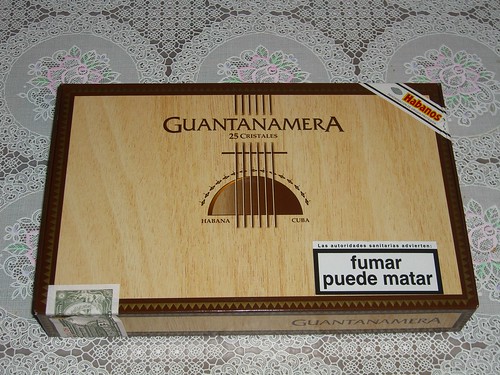 Apparently "smoking can kill you". Why didn't anyone say anything? 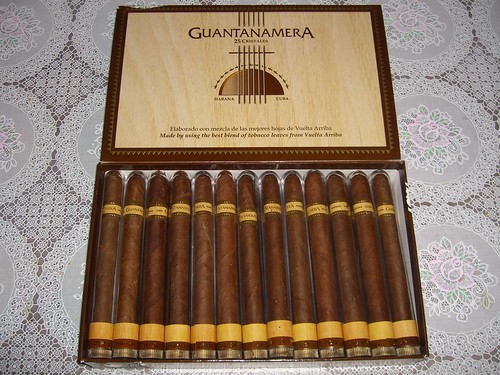 The Guantanamera brand is named after the song you should be listening to. According to that Wikipedia page, they're the el cheapo brand of machine-made cigars. Well, what'd you expect? It's not like this is a royal wedding.

I really enjoy the smell and flavor of cigar smoke. But the last time I tried smoking a cigar, I got dizzy and had to lie down for an hour. So I think I'll be abstaining during the wedding dinner when the cigars are being lit.