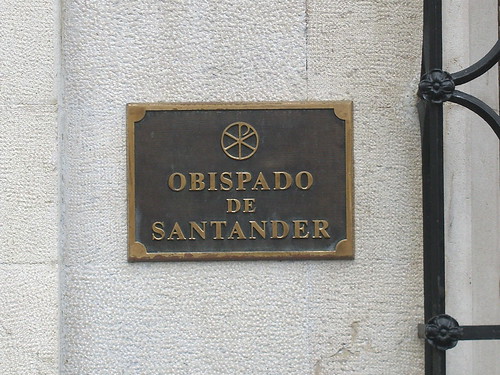 The bishop's offices are in this awesome stone almost-castle next to the Santander Cathedral. The juxtaposition of old stones with new glass and electronic security system was pretty crazy. Upon entering, the receptionist asked us what we wanted. We said we were here to see the vicario general because our local priest told us we needed him to get our paperwork done. The receptionist fit the stereotype of a government employee perfectly. Her initial tactic was to tell us that we were in the wrong place and we should go away. As we were explaining the situation, she would interrupt us and tell us that we should be talking to our local priest. Marga explained that I was Episcopalian and needed to sign a document saying that I was cool with the Catholic wedding. The woman kept saying, "No, no, no, you should be filing this with your priest." I said, "But I'm not Catholic! That's why we're here!" To which she responded, "You're not Catholic? Why didn't you say so?" Both Marga and I said, "But we told you he/I was Episcopalian!" To which she said, "Episcopalian is nothing." I'm not sure what she meant by that (probably trying to hide her ignorance of other religions), but it looked like she was actually springing into action, so Marga and I bit our tongues and prayed hoped for the best. Sure enough, a few minutes later she came back to us and walked us up to the waiting room of the vicario general.

Let me tell you, this place was nice! The decorations were reminiscent of some of the nicer royal or corporate places I've been. All I can say is that it's pretty god damn lucrative preaching Jesus' message of giving, and how you should sell everything you have and give to the poor, and how it's okay, no, good to be poor and you should give what little you have. What a seriously sweet pyramid scheme to be at the top of! And it's not just the collection plate. In Spain, on your tax form, there's a little checkbox for "give any extra money left over to The Church". 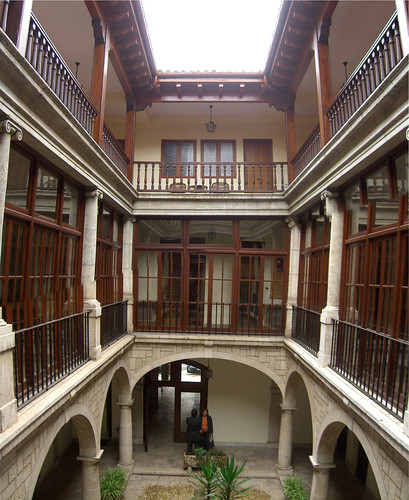 I'm very pleased with how well these two landscape photos got stitched together. The building was of typical Moorish design with an inner patio.

We finally got called in to a nice office with the vicario general, a nice middle-aged man. If it weren't for the crucifix paper weight, we might have been in a banker's office signing a mortgage document. He gave us the document to fill in our names and sign. The top part of the paper was for the Catholic, promising to raise the offspring in the Catholic church, and the bottom half was for the heathen, saying that I understood and accepted my wife's promise to the Church. Notice that I didn't promise myself, just that I understand her promise. I guess promises from the unholy don't mean much. There was also a little clause there towards the end that said, "and marriage is an indissoluble union and I renounce all kinds of divorce". My inner troublemaker wanted to ask him if he knew of any good prenup lawyers.

With that signed and stamped, we went downstairs to get Marga's confirmation loophole papers done. But the guy that does them wasn't there, only his creepy fellow with papers all over his desk. He ended every sentence with, "Eh?" I was kind of reminded of Opie from Family Guy. He looked at me funny when he heard I wasn't Catholic. He spoke really fast, so I couldn't catch all that he said. Just before we left, he said, "Marriage is a really serious thing! Eh? Because if __________ hell! Eh?" It sounded rather ominous to me. Marga later explained that the part I didn't understand was: "you don't behave well, your marriage can really be". So the final result is that we have to go back to Santander again on Saturday. The offices will be closed, but basement freak, Opie, will open the door for us and give us the document we need.

So, once again, we got things only half straightened out. 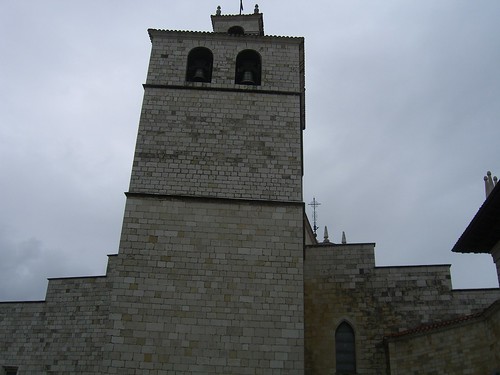 Looking back at the "cathedral" on the way out, shrouded in some faith-questioning weather we've had lately. Santander has the ugliest cathedral I've ever seen. It might be spectacular inside...I don't know.

Throughout the entire proceedings, no one asked for any identification or documents of proof of anything. It was just sign here, sign there, stamp! and you're good. If our documents aren't in order, then it's not their problem! I've seen this attitude a lot around here.