No, "roofless" is not how David Beckham describes the Paparazzi. Seriously, have you heard that man speak? I think he and George W. Bush might be tied for the prize of "person who most sounds like an idiot when they talk". At least David has some demonstrable talent and good looks. Yesterday, I took a sunny midday walk around town, stopping at several bars to sit out in the sun, sipping a martini, and reading Slaughterhouse Five, the first pocket-sized paperback that caught my eye on the bookshelf. It was a most enjoyable way to spend my time. 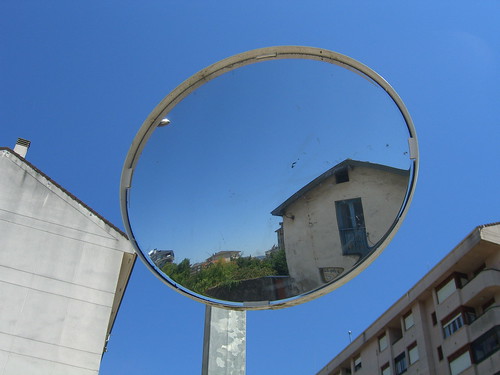 This is one of those convex "so you can see cars coming from around the corner" traffic mirrors. Check out that bluest of blue skies!

There's this one house in Colindres whose ground floor is boarded up and people put concert and festival posters there (like this one). Recently, though, it's started to stink. I suspect that something has died inside. One of the boards was loose enough so that I could peer inside, and I was surprised to find that the house wasn't there at all. It was just a faÃ§ade being held up by the adjacent houses. The inside was overgrown with grass, vines, and the timber remains from when the house collapsed. That was when I got the idea to take some photos of the balcony door of this faux faÃ§ade. 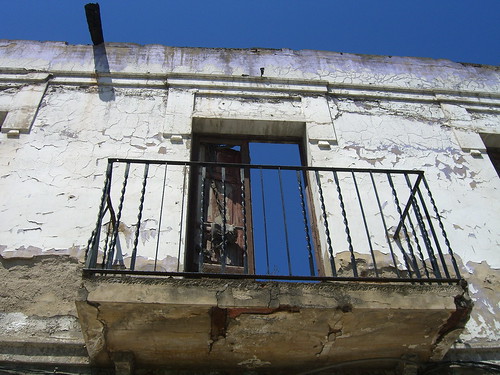 No need to come out onto the balcony to check the weather outside. 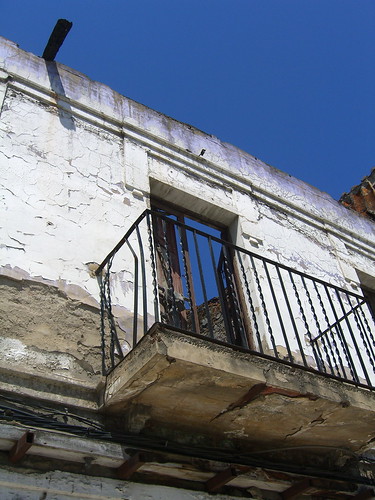 It's kind of a pity that a house more or less in the center of town should be in this state.