We have recently become aware of a fancy-schmancy B&B in Upper Colindres (Colindres de Arriba). So today, we went to investigate it as a possible lodging for American wedding guests. It's called Casa de Valle (Valley House) and is in the ancient part of Colindres that's up on a hill and thus called Colindres de Arriba. It's an absolutely gorgeous rustic mansion, kept impeccably clean and beautiful. And the price reflects that.

This B&B is about a 10-minute walk from our house, whereas the other one-star hotel is only about 5 minute. Obviously, the last part of the walk is uphill. You have to walk past the town hall to get there. 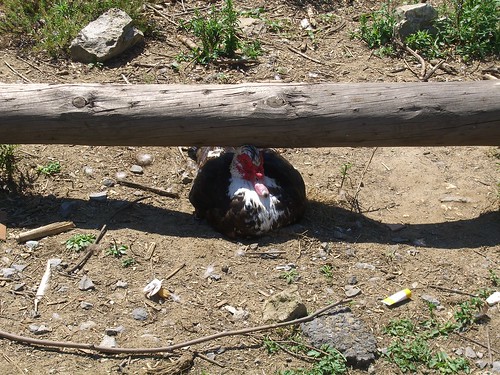 We also passed by the official town duck pond. This fellow amazed us with his strength and balance as he supported this enormous log using only his little avian noggin. 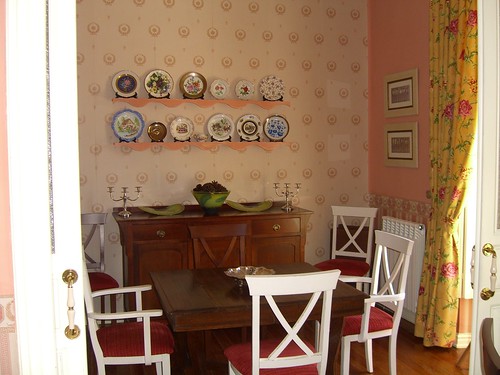 The breakfast area was beautiful. 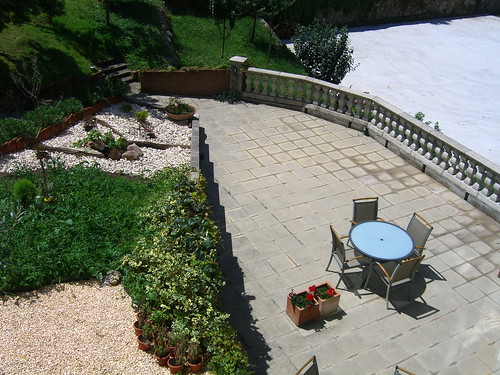 The view out the window in the dining room. That's a parking area to the right. 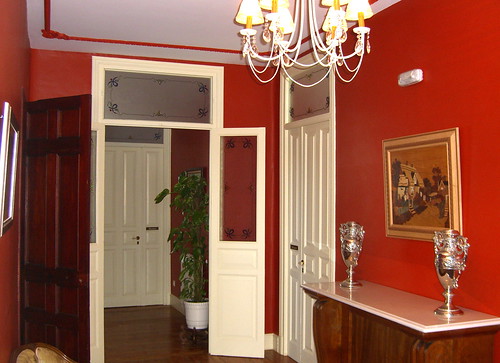 The bedrooms were all on the second floor (that's 3rd to you yanks). This was the hallway on that floor. 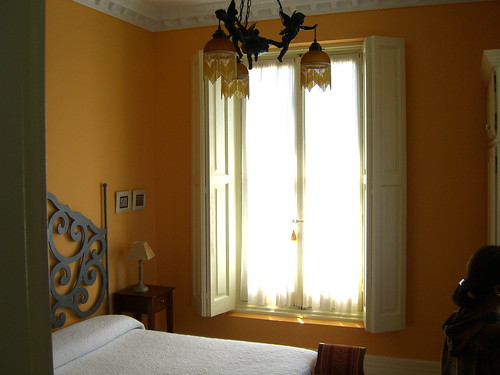 The yellow bedroom. Check out the angels in the light fixture. 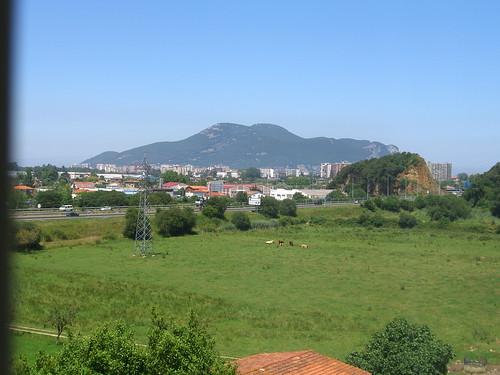 The view towards Laredo from the yellow bedroom. From near to far: Cows, major motorway that cannot be heard with the windows closed, buildings in Laredo, and Mount Buciero in the distance. 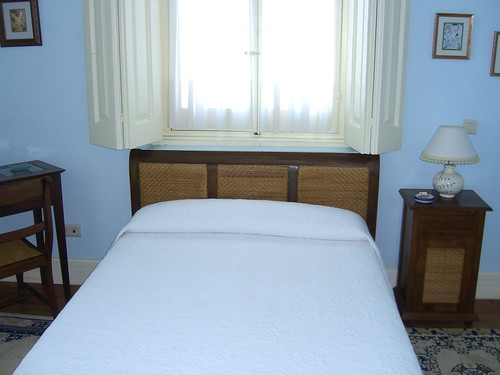 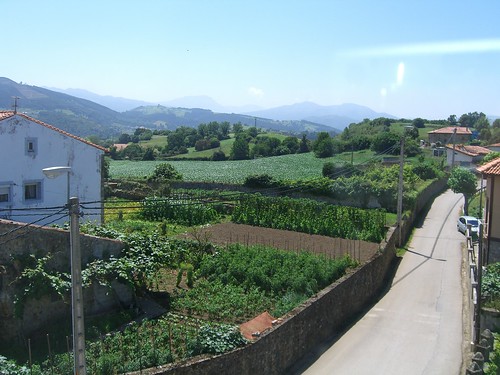 The view from the blue bedroom. This is the road the B&B is on. Rural enough for ya? 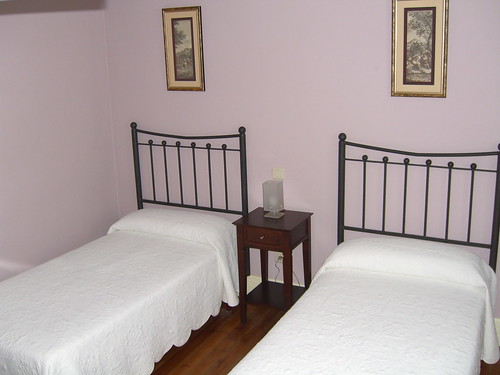 One of the bedrooms had two small single beds. 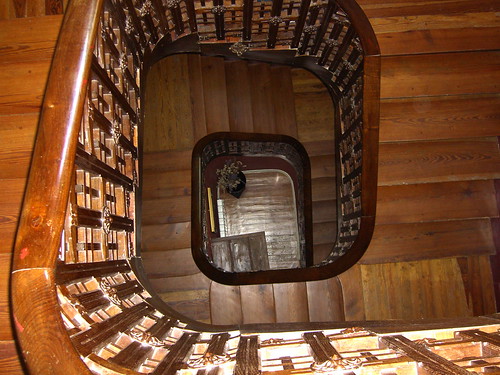 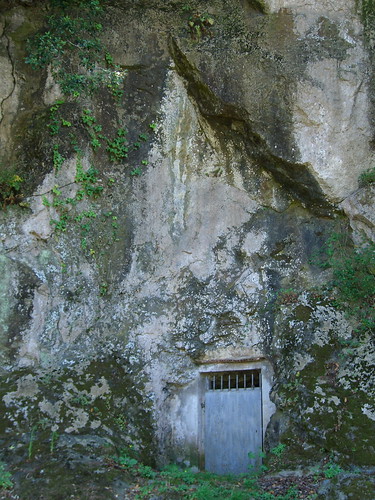 Plus, if you stay at this B&B, when you walk the 800 meters into town, you get to walk by this mysterious, curiosity-inducing, Stephen King door into the side of a cliff. The local legend is that this is where they put the foreigners that come to weddings without huge monetary gifts.

Unfortunately, the two days we're looking at people staying there are October 10 and 11, and the 11th is priced as part of the "high season" because it's next to a holiday. In the high season, the 66€ rooms jump up to 81€. We told the woman which days we needed, and then later we said, so it's 66€ per room per night, right? And she agreed, so in theory, we get the same cheap "low season" price both nights, but I'm not 100% positive that she understood what she was saying, so I'll show the higher prices for the 11th so that people will be pleasantly surprised by the lower price when they get here rather than unpleasantly surprised by a higher price. The other problem is that they don't have enough rooms for everyone. Here's what they have:

one double bed and one sofa in an entrance area

I don't know if the suite price goes up on the 11th like the others, but we should assume that it will also go up 15€. Oh, and the bathrooms are all pristine and gorgeous. The woman that runs the place claims to know how to say, "Here's your breakfast," in English, but not much more.

The people I have confirmed for the moment are: Jamie & Lynne, Kate & Paul, Andrew, and Tom & Debbi for both the 10th and 11th, and Jack & Diane, and Olivia for the 11th only. They could all fit IF either Andrew and Olivia shared the two-single-bed room on the 11th (and one couple coughed up for the suite), or if Olivia slept on the sofa in the suite with her parents.

Neither confirmed nor denied American visitors for these days are: John & Linda, Amy & David, Jacob & Melissa, and Michael & Liz. If the confirmed visitors fill up the Casa de Valle, the unconfirmed will have to stay in the one-star Monte Carlo hotel in "Lower" Colindres, or in one of the many hotels in Laredo, a five-minute drive away. The Monte Carlo will probably be much cheaper (and look like it).

On the way back home, we stopped by the Monte Carlo to ask about their prices and see their rooms. The bartender told us to come back later when the manager was there, but that he was pretty sure that the prices hadn't even been set for October yet and they weren't taking reservations that far in advance. What a bunch of clowns.

So if you're listed here, you should start deciding whether you prefer a cheaper place in town or a pricey place five minutes walk out of town. I suspect that other, more normal hotels, will be +/- 50€ per room per night, and that the Monte Carlo might be a little less than that. If you're in the unconfirmed list, I recommend that you confirm (if you have already, and I've forgotten, I apologize). You can email me or leave a comment below.

We went by the Montecarlo this evening and found that the rooms are 44€ per night, all with individual bathroom, television, etc. Breakfast not included. If it were me, I would stay at the Montecarlo. But at least now you know that you have a more classy option. 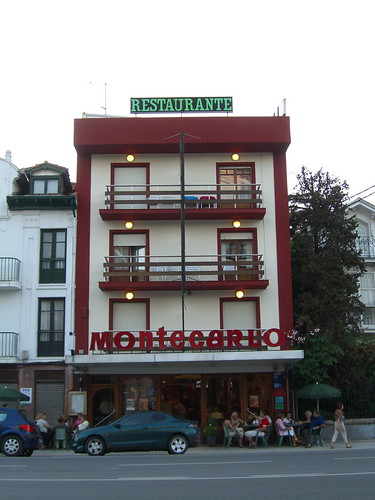 From across the street. 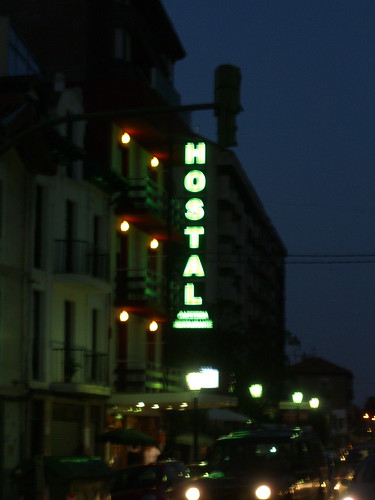 From down the street, later at night. Hard to miss.