Today is a holiday in many parts of Spain, including Colindres, because it is the official day of Santiago. Santiago was the disciple of Jesus credited with bringing Christianity to Spain. This morning, I told Marga, "I just realized that today is the closest thing I have to a Saint Day." "But your name's not Santiago," she said. I responded, "My middle name is, though." In my Spanish classes in high school, we learned that, in Spain (which, like most Americans, we didn't really differentiate from Mexico), everyone had and celebrated their Saint Day. Since everyone's name matches up with the name of a Catholic saint, and every saint has a day of the year associated with it, one day, every year, matched your name, and that day was celebrated much like a birthday, with a party and presents. "Two birthdays??? Cooool!!!", we said. The reality is that Spain has become so god-damned secular that you're lucky to even get a "Happy Saint Day!" wish even if your name is super-biblical Maria or José or Juan or Santiago. 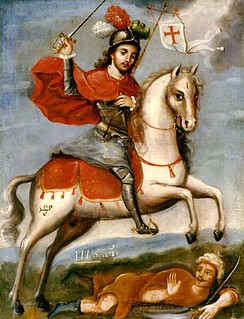 If you're like I was when I visited Santiago de Compostela last year, you're thinking, "Wait! Santiago is a biblical name!??" When I asked Marga this last year, she said, "Duh! The apostle!?" Whah!? I might not be able to enumerate the whole dozen from rote memory, but I'm pretty sure I would recognize all their names. It wasn't until I got home and bathed myself under the illuminating knowledge lamp that is Wikipedia that it all became clear. Santiago is a name that the Spanish made up out of the blue for Saint James. Or perhaps he chose the name for himself when (if he really) he came to Spain.

I'm very pleased to just now read, further down on St. James' Wikipedia entry, that he returned from the dead heaven exactly 800 years after his death to fight the Moors and eat their brains at the Battle of Clavijo, and is thus the reason for the existence of Marga's first surname, Matamoros, which means Moor slayer, or in more modern words, Arab killer. That the meaning of her last name is so socially taboo just tickles me. It was particularly funny in England, when people would see her surname and say, "Aww, isn't that beautiful! It contains the word 'amor'!!" Lovely.

I see from the sidebar we've got just enough time to travel around the world before the wedding...if there wasn't so much planning to do.