Rosana is one of Marga's favorite singers. She's the only artist that Marga has followed at all through her ten-year career. If Marga had ever purchased a CD, it would have been by Rosana. Back in 2000, when my new Spanish girlfriend told me that Rosana was her favorite artist, I immediately bought her first two CDs and kept them in my car's 6-CD changer for the full year and a half that we lived on separate continents, so Rosana holds a special place in my heart as well. She helped teach me Spanish.

Last night, we saw her live in concert. As we were driving to the concert, I was trying to think of how to describe Rosana's music in terms of other artists I know. It was very difficult. Her songs vary in style from Reggae to Flamenco to Jazz to Rock, with harmonica, steel drums, and bongos. Suffice it to say, she'd have fit in perfectly in Lilith Fair, with Sarah McLachlan, Sheryl Crow, the Indigo Girls, Lisa Loeb, etc.

Rosana absolutely despises fame. One of the fans waiting in line at the concert told us that for her first few years as a singer, she refused to do any live performances on stage because she was so shy or embarrassed. All the photos of her on her albums were blurry and distant. She never does television interviews or performances. I can only assume that she does a concert tour every now and then to pay the bills. Her album sales are almost completely word of mouth. I learned from her Wikipedia page that her first album gained some international recognition because two of the tracks were used in the soundtrack for a B Movie, and thus sold more copies than any album since. She wears no make-up, has never once attempted to promote herself as "sexy", and, as you'll see below, doesn't feel the need to wear a bra, either. Her passion is singing, and she does the minimum required to make a career out of it. 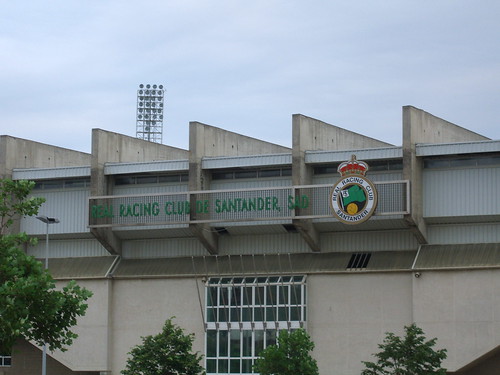 The concert was across from the football soccer stadium for Santander's primer league team, Real Racing Club de Santander. Why they've chosen the English gerund "racing" is beyond me.

The concert was in this building, the Palacio de Deportes. It looks a little like a Roswell crash site, if you ask me.

We got there an hour early, and were second in one of the lines to get in. It was general admission, so once they opened the gates, 15 minutes before the concert began, we got to run in and get up next to the stage. We debated this for a moment, but I talked Marga into it. There's a huge difference between a concert standing by the stage and one sitting 50 meters from it. Plus, Rosana's audience is not the kind to push and shove. As if to give me a perfect example of this, to my right at the barrier, there was a gaping hole for about two meters, made to allow for two women in wheelchairs to see the concert up close. Three times during the concert, people, having seen the hole next to the stage, came to eagerly fill it, saw the wheelchairs, apologized, and went back into the crowd. This is how comfortable we were up next to the stage. 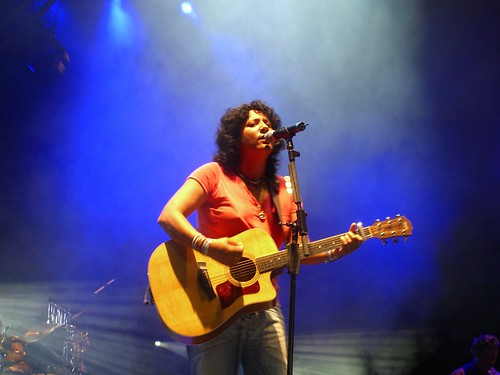 I was unaware that she played the guitar. But then I knew so little about her... 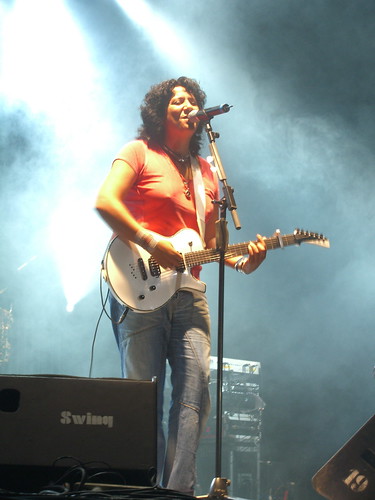 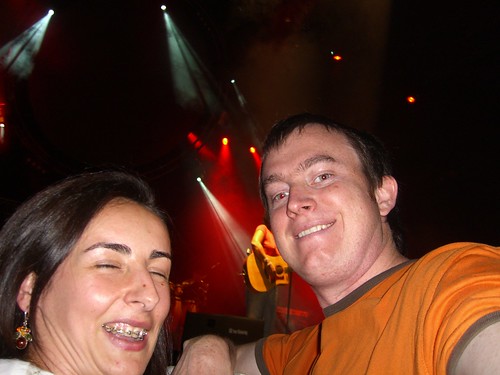 I realized that I had no proof that we were there so close taking these pictures, so I made this attempt. Unlucky aim and pudgy cheeks.

Rosana has some incredible charisma. A few times she looked right at me and smiled, which was an incredibly warming feeling. I swear that she's the only singer that, and I've told Marga this many times, when I'm listening to her albums, I can actually hear her smile. It's hard to explain. This was confirmed visually throughout the concert. Marga noted after the concert that Rosana has a definite sparkle in her eye, a special something that only poets like Rosana could describe.

During her first of two encores, she did something that blew my mind. She walked off the stage and came out into the crowd, kissing and hugging her fans, letting them take pictures with her, while singing the whole time! Due more to being unlucky than a lack of understanding of fluid dynamics and swarm theory, I was unable to get a kiss, but I did get a hand on her shoulder for a few seconds. After walking all the way back to the seats (it was a basketball stadium) and kissing some older women and children, she lead everybody in a conga line, before returning to the stage. 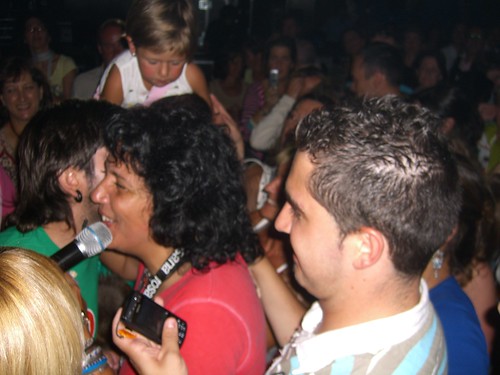 In a mass of CCD-carrying fans. 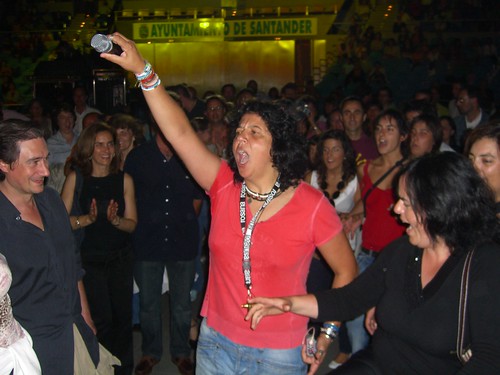 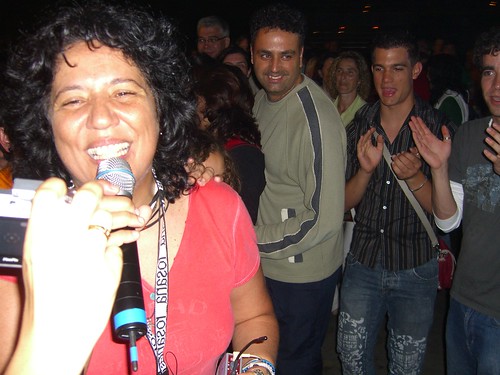 She's got a great smile.

My respect for her tripled with this stunt. She didn't have to be so generous and caring as to walk out among us. We would have gone home happy even if she hadn't. But her "I'm not special" philosophy brought her out to party with us at our level. As I've mentioned, her audience is mature. A teen heart-throb or a rock star with drugged up fans couldn't do this even if they wanted to. But she could, and she did, and we were very impressed. 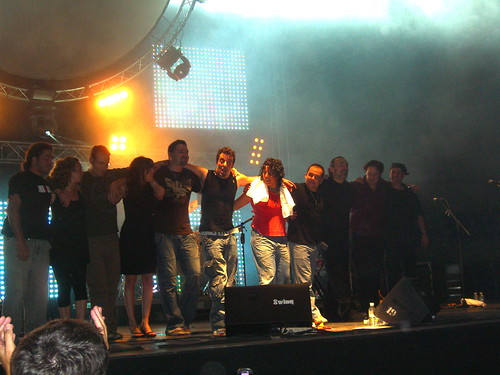 Rosana and the band, bowing on stage. 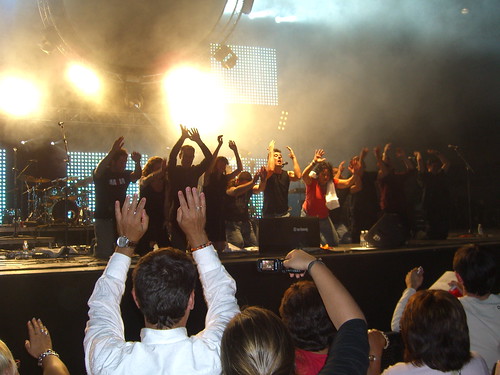 After the bow, they got down on their knees to worship the fans. She stopped between each song to thank us for our applause as well. Classy.

For her second encore, she performed what is definitely my favorite Spanish song, called Si Tíº No Estás Aquí­ (If You Aren't Here). Here's the video I found for it on YouTube:

I was unaware that she played the guitar for this song and did it entirely solo. This, of course, doubled my respect for her again.

And my horribly un-poetic translation for you:

I will spill my dreams if I don't have you one day The biggest thing will become the smallest I'll walk in a sky without stars this time Trying to understand who turned paradise into hell Don't ever go, because...

I can't be without you If you're not here, the air burns me

If you're not here.

I love the "burning air" line. If the song weren't obviously so inappropriate, we'd use it in our wedding video. As it is, Rosana will definitely be featured on its soundtrack somehow.

A guy waiting in line to get into the concert told us that he also had tickets to a Norah Jones concert, her second of two in all of Spain this year, in Vitoria (probably in the same place we saw David Bisbal), but that he couldn't go because of work-related issues. When he told us, I was extremely disappointed that we hadn't heard about that other concert and gone to see Norah instead. But I'm pretty sure we wouldn't have left Norah's concert with such good "Wow, that was an awesome concert!" smiles on our faces. We were truly impressed by Rosana.