Apple was ahead of their time with the Newton. They've really stood up on the board at the crest of the wave with the iPhone, though. I'm proud to be a shareholder (bought at 49, baby!). 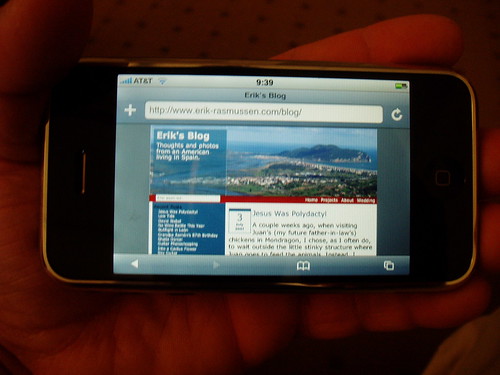 What amazes me is the legibility of the text. High resolution is what made me leave the Fifth Ave. Apple Store with a full video iPod instead of the nano I went in to buy. 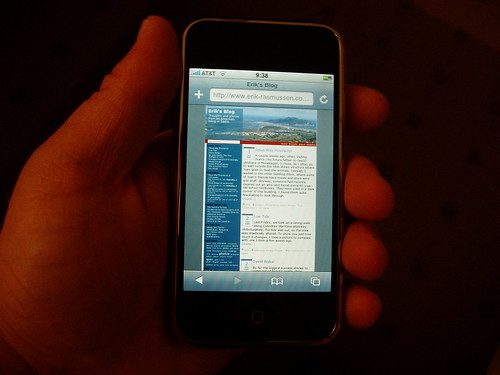 Even in portrait mode, it's completely legible. (this image is shrunk from the original)

Of course I'm a long way from touching one of these devices here in Europe. I think that if I lived in the States, there'd be no stopping me buying one of these things, whether I had a need for it or not. Several of my coworkers are already sending me emails with the envy-inducing "Sent from my iPhone" footer. If nothing else, Apple is pretty sly at marketing.

Check out this email I recently received from my father. I like to call it "Daddy's first cell phone":

I stopped by the Cingular store next to Papa John's Pizza and asked if they will be carrying the iPhone. They kind of laughed, and said Yes, but it would be a while. I said I heard it was coming out June 29th. They laughed more, and said it might be sometime in July before they got any. I asked if they were taking any pre-orders, and they said, sure, they'd be glad to. They asked 4 Gig or 8 (I said 8), and took my name and number, then wanted my land line too. I told them that was my land line; that I didn't have a cell. They didn't seem to believe me, but they let me go anyway.

It's kind of like a Ferrari being your first car.

A big thanks to Alan for the pictures.