A couple weeks ago, when visiting Juan's (my future father-in-law's) chickens in Mondragon, I chose, as I often do, to wait outside the little stinky structure where Juan goes to feed the animals. Instead, I waited in the other building there, where some of Juan's friends have meals and store wine and stuff. Anyway, someone had recently cleaned out an attic and found some 40-year-old school textbooks. They were piled in a dark corner of this building. I found them quite fascinating to look through. The first thing that struck me was how Bible lessons were perfectly intermingled with concepts of science, math, and grammar. Jesus did this, 4 + 2 = 6, Apostle Paul did that, mammals have hair, etc. All facts. All true because the teacher says so. 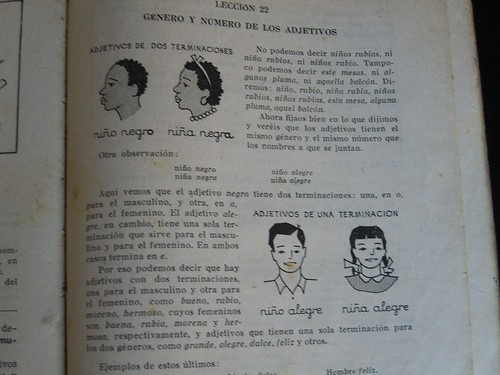 This page stood out to me, since I'm a culturally sensitive American who grew up alongside the term "politically correct". First of all, can you imagine a present-day American textbook choosing "black" as an adjective to describe an illustrated person. Obviously, it has to be a person to demonstrate the gender suffixes on the adjectives, but... My Spanish books in school used "tall" and "short" or "blond" or "brunette", as I recall.

And then, as if to emphasize how much it sucks to be black, the other illustration on the page is of two white children, labeled "happy boy" and "happy girl". I know it's not fair to compare 40-year-old Spanish books with present-day American books. US textbooks from 40 years ago probably wouldn't have been much better...maybe even worse. 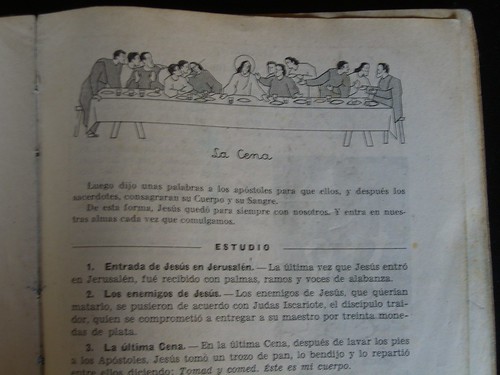 The Last Supper illustration also caught my eye. Having read The Da Vinci Code, my eye immediately recognized that this was a replica of Da Vinci's depiction, obvious from the 'V' shape between Jesus and the person to his right. Like Da Vinci's version, there's a baker's dozen of cups on the table. The disciples are grouped into four groups of three, making counting them easier. It's even got the "disembodied hand", as Dan Brown put it, that can't possibly belong to anyone, slicing across the feminine figure's neck.

It was then that I noticed the big framed version of the Last Supper hanging on the wall. 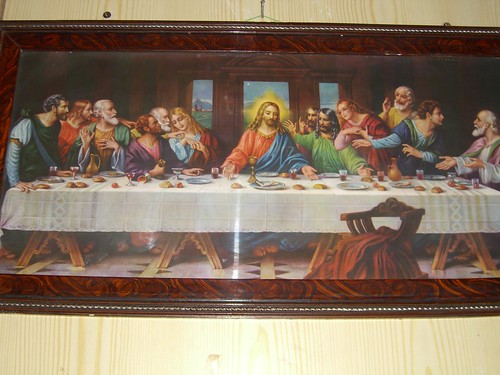 Here we see the same four groups of three, the same "chalice" shape, but this artist apparently wasn't a member of the Priory, because he gave Jesus a big golden goblet to match his halo. The chair with the cloth on it in the foreground is nice touch.

The artist makes no attempt at all to make the hot blond at Jesus' side look remotely masculine. Not only that, but check out the curly-haired woman in red leaning in on the right side of the picture! But wait, the female apostles aren't the biggest discovery here. Are you ready for it?Jesus was polydactyl!! He's got six toes! I kid you not, the proof is right there in this painting!

Either that or the artist sucked. 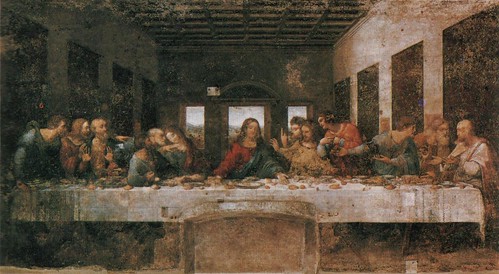 Here's Da Vinci's original. Leo, being the Renaissance master that he was, was clever enough to put an object in the foreground so he wouldn't have to draw how awkwardly Jesus' eleven toes fit in his sandals.