In my Spanish class in England, one of the Spanish teaching assistants told me that, in Spain, before lunch (the big meal of the day), the Spaniards often go out and have a vermouth, a so-called "aperitif". At the time that I was taught this, I had been visiting Spain and going out with Spaniards for pre-meal drinks for several years, and I had never seen anyone order a vermouth. To me, a vermouth was something that was added to a martini, the favorite cocktail of my father, grandfather, and James Bond. Not only that, it was the most disgusting part. As Winston Churchill is mythologically reported to have said, "To get the proper amount of vermouth in a dry martini, one should add ice to the glass, glance at the bottle of vermouth from across the room, and then add the gin." My father takes several years to make it through a bottle of vermouth in his daily martini ritual. I'm sure he will elaborate in the comments.

I'm much more of a beer and wine person myself, as are all of Marga's family, apparently, since I was so ignorant to this tradition. But it turns out that a significant percentage of Spaniards really do order vermouth when out in the pre-meal drinking ritual (in which I participate at every opportunity). The vermouth that they drink is not the nasty "dry vermouth", but a sweeter spiced wine. As if to try and complicate things, they often call it by the brand, Martini. A typical Spaniard has no idea what the 007 cocktail is. If you say "martini", they will assume that you mean this sweet vermouth that they drink here. Like wine, there is the option of red or white. Unlike wine, they call the red vermouth "vermíº rojo", not "tinto".

Recently, I've taken quite a liking to the red vermouth, and often order it in place of wine during our pre-meal, midday excursions. It's particularly nice in the summer, because it's iced. I took the following picture last Sunday at the same table at the same bar as the Blond and Brunette shot. Like before, Marga was so engrossed in her ultraviolet absorption, that I was left to play artistically with my camera. The sharp angle of the buildings makes it look like I used some fancy lens, but I'm not that sophisticated. 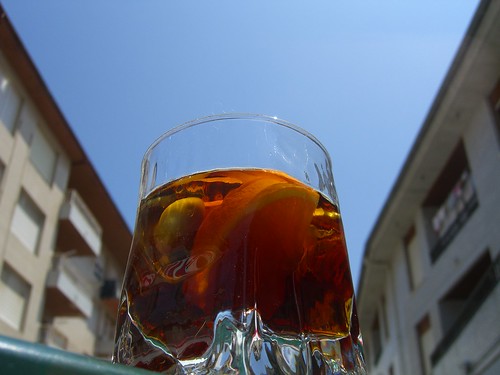 Plus, they often give you olives.