This past week, there were advertisements around town for an organized hike in the mountains on Saturday. You had to be at the town hall by 8:30 to participate. We weren't sure that we wanted to do it, but we decided to set the alarm clock for 7:30 and check out the weather and decide then. It was a little cloudy, but looked like it was going to burn off and be a wonderful day. So we went. From the town hall, we drove to La Aparecida, which is located right about here. There's a famous church where, 400 years ago, some monk had a hallucination once that he, using Occam's Razor, assumed must be the Virgin Mary, and now pilgrims come from all over to see the church.

In Colindres, there's a funeral parlor called "Aparecida", which literally means "appeared". Every time I see it, I'm tempted to get some spray paint and vandalize it, so it reads "desAparecida".

Because we walked to the town hall, not knowing how the transport to the mountain would be organized, we had to walk back home to the car. When we got to the destination, the group of hikers was already in the distance. So we had to walk extra fast to catch up to them.

Just like last time, when we did a similar excursion in September, 2005, we were by far the worst prepared hikers. We actually wore our hiking boots this time, but that was the only decent preparation we did. Everyone else had much more water than we did, they brought sandwiches to eat at the peak of the mountain. Most of them had telescoping, fiberglass walking sticks, and some of them had other specialized clothing. The problem was that we had zero idea of what it was going to be like. All the poster said was "walking in the mountains". We ended up going to the same mountain peak that we went to two years ago, where I took the picture in the blog header, that I now know is called Pico Candiano.

A panorama from where we parked at La Aparecida. As you can see, it was pretty cloudy as we started out. 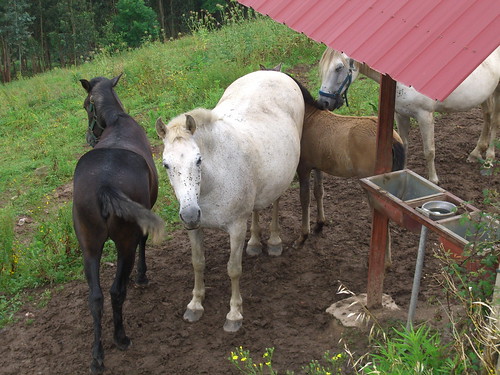 A couple of caballos taking it easy under their little shelter. 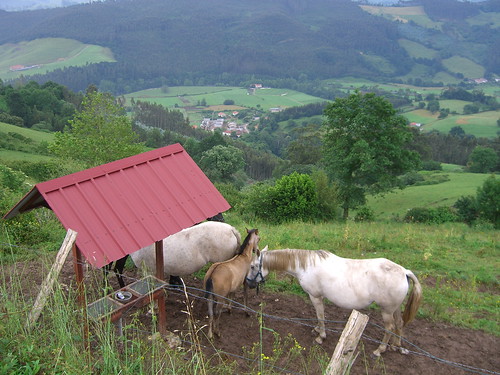 The little colt had the best view. 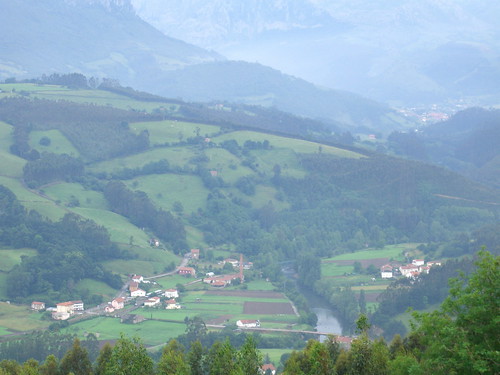 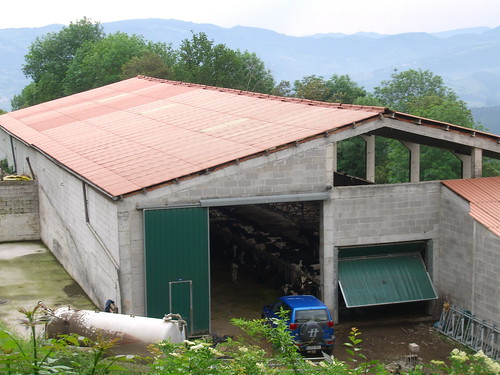 We saw some cows having breakfast. 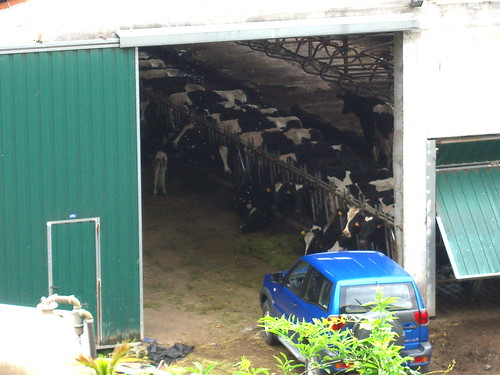 Quite a few of them in there. 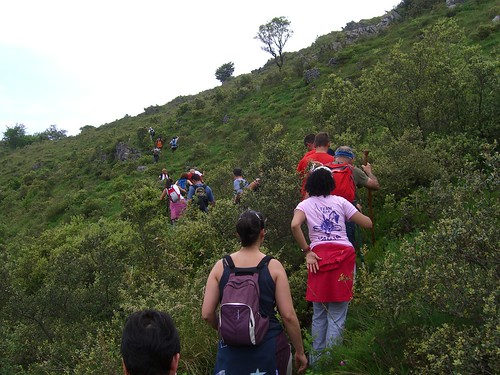 Trekking up the mountain. The hardest part was walking on a sideways slope. My ankles are still killing me.

There's something exceedingly natural about walking with a group of people in the wilderness, on a barely visible path, staring at the feet of the person in front of you. Between the thoughts of "Ow, my feet hurt" and "Can we go home now?", I had couple genetic memory flashbacks to walking with my tribe through the hills and valleys. 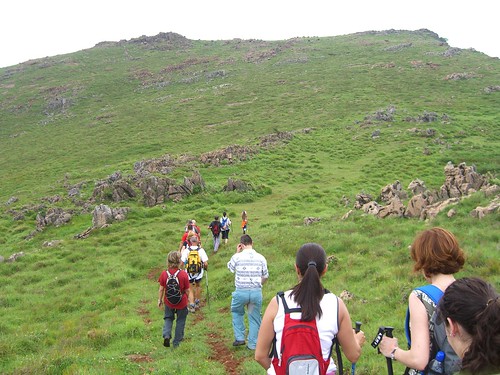 Up towards the top, the only vegetation was grass, and these odd rock formations. 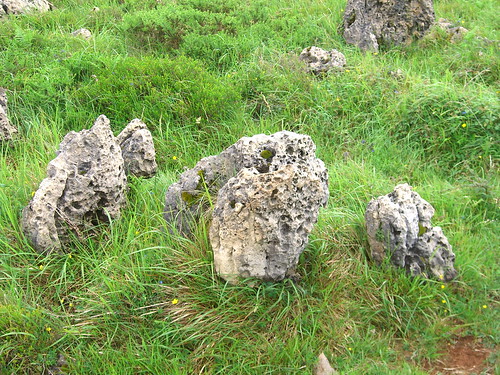 They had little holes, like swiss cheese, from weathering many years of wind. 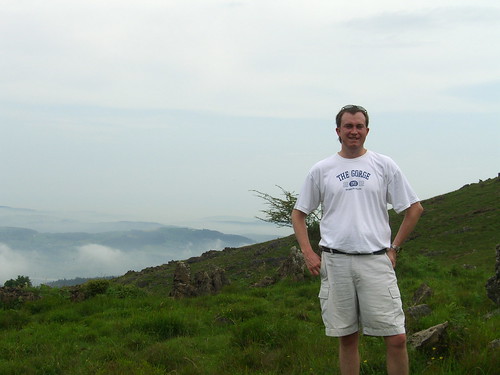 Proof that I was really there. 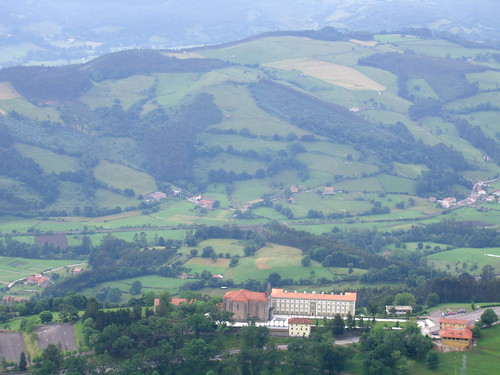 Looking back down at the church from the top of the mountain. That little red dot in the bottom right corner is our car.

In this panorama, you can see the long, multi-kilometer, uphill route that the pilgrims walk, despite the fact that you can drive there, to get to the church. In the largest version of the image, you can see the red pilgrim path along the side of the road. There are little virgin statue praying stations along the way to keep you going. Penitence is a bitch. 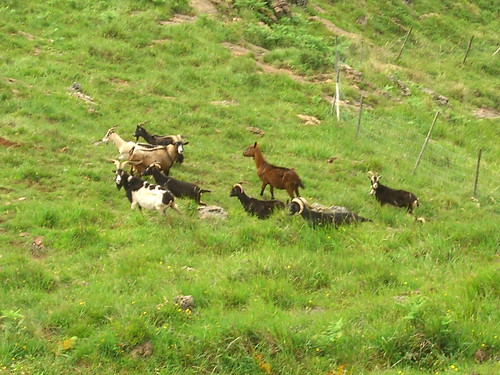 You know you're high when you're looking down on goats. 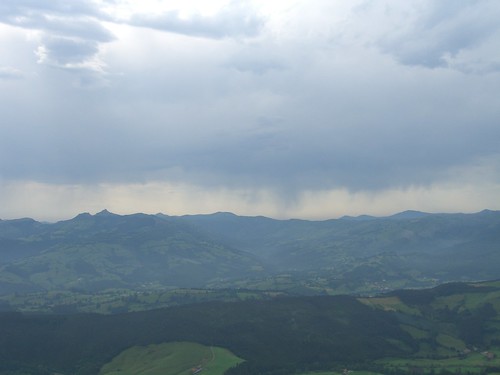 A storm in the distance. 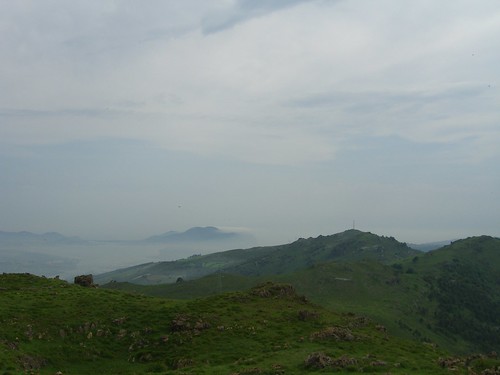 The visibility was terrible! Here you can see the familiar shape of Mount Buciero (see top of blog) in the center, and the Pico Candiano, with the tall radio tower on the right.

This is about where I thought, "Oh well, so we're not going to the same mountain as last year... Okay, everybody, let's head back!" Little did I know... 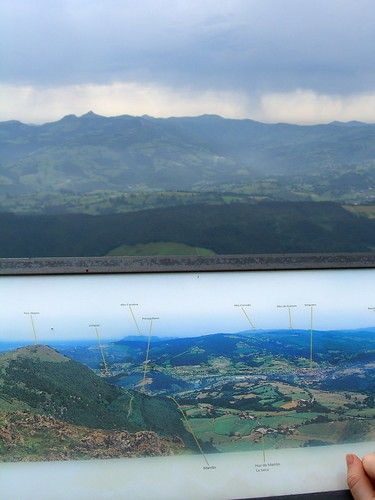 This particular peak had a horizon guide. 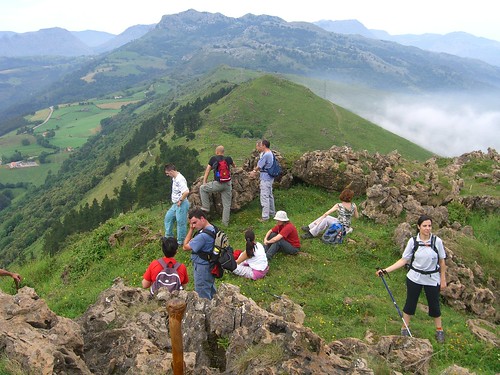 Resting with the tribe. 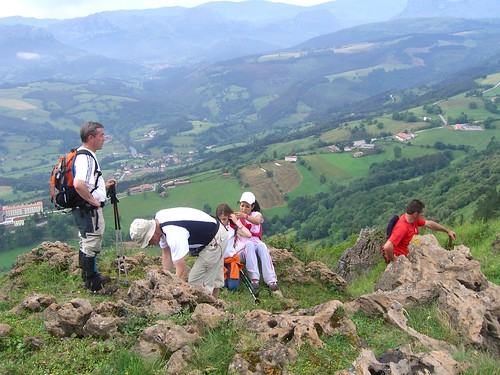 This picture, not being three dimensional, fails to capture how deep the backdrop was behind these two girls. The 12-year-old girl was the first to the top of each mountain. 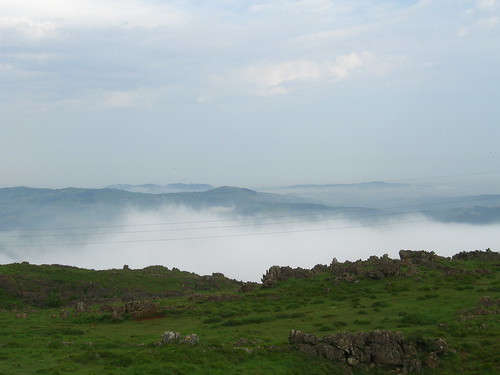 Then, out of nowhere, a cloud came up the side of the mountain and attacked us! 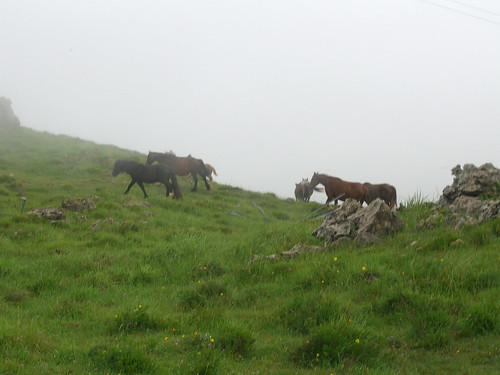 Last year there were horses roaming loose up here, too! 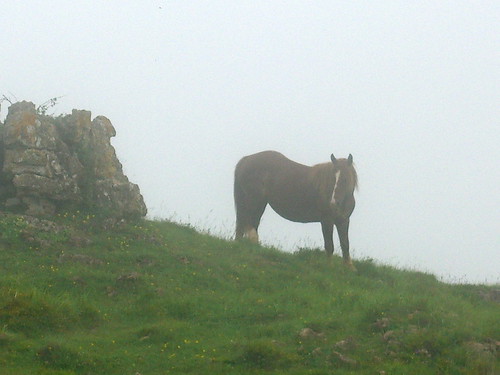 This guy was holding a really majestic pose with his head held high and the foggy backdrop, but he looked my direction when I went for my camera. 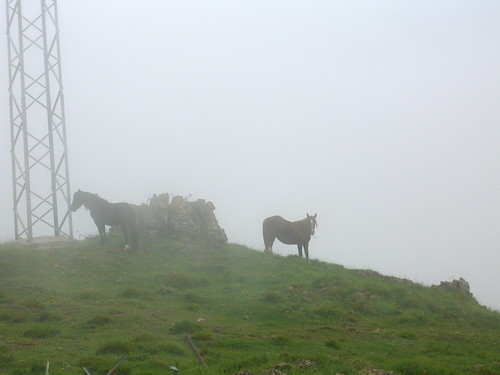 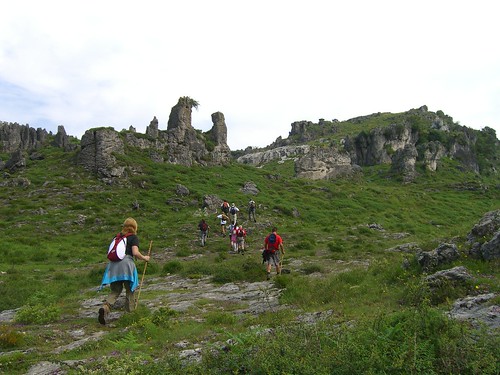 About 98% of the way to the top of our final destination (just like last time, strangely enough), my calves started cramping up. I was instructed by a couple 50-year-old men, who were having no problems whatsoever, that I should take smaller steps, and walk slower. They walked slowly with me for a bit, but then got bored by the slow pace and sped off in front of me.

Finally, we made it! The top of Pico Candiano! While everyone else was munching on their sandwiches and apples, all I could do to pass the time was play with taking photos with various vegetation in the foreground. 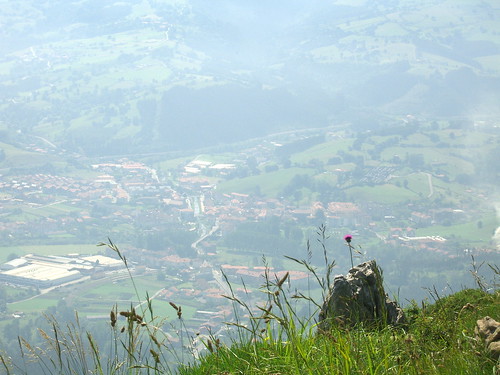 There was a butterfly on that flower a second before. 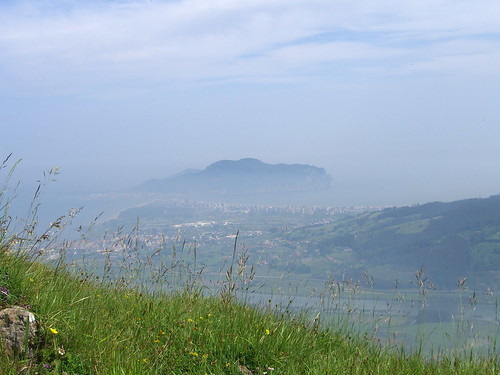 Looking down at Colindres and Laredo.

The panorama you've been waiting for, showing Colindres, Mount Buciero, Laredo, and Ampuero. What a perfect view of what looks just like that Wikipedia page I referenced in my last post. "Drowned river valley" is a good term for it.

There was no shade up there. Not much wind either. Compare this with the video that I took back in September, 2005:

While we were up there on top of the mountain, the sun came out. The humidity was still incredibly high. The result was general discomfort. On the way back, I became very dehydrated, and suffered some heat exhaustion. There was a period where I really thought I might pass out and have to be carried the rest of the way. The moral of this story is to not be an idiot and take just a small bottle of water on a four-hour hike in the 28° sun.

When we did finally get back to the car, we bought two bottles of water from a vending machine. It was the best water I've ever tasted. The rest of the group arrived little by little (somehow they didn't all pass me on the way back), and we all cooled off in the bar of a restaurant there at La Aparecida. While we were there, drinking a Coke (Marga had the good idea that some sugar might be good for our blood right about then), all sweaty, a group from a wedding came in, all freshly showered and elegantly dressed. It was quite a contrast.

A couple months ago, we evaluated La Aparecida as a possible wedding location, but declined it because, apart from the spectacular views, the church and restaurant were pretty mediocre. 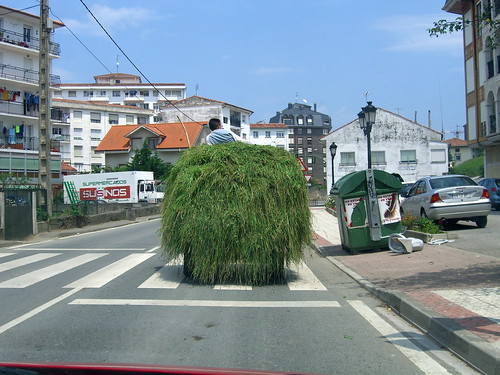 On the way back home, just before arriving, desperate for a shower, some food, and a bed, we got stuck behind this guy driving a big pile of grass.

Twenty-four hours later, everything below my knees tingles.