Sometimes I get the feeling that local governments really struggle to find things to spend money on. They are currently totally redoing the entrance to Laredo, creating a round-a-bout where there was very little need for one, and changing the sidewalk tiles to a different style.

In Colindres, they're doing the same. The town hall is dragging its feet in constructing the municipal swimming pool that residents have been begging for for years, and they've begun work on an area in the very center of downtown.

I recommend clicking on the picture to download the big version. It's 10051x3634 pixels and 4.4 MiB, so be patient. It should give you a nice idea of what downtown Colindres is like.

This area that you can see outlined by the newly budding trees used to be just an asphalt basketball court surrounded by a chain-link fence. It was very much like the "inner city rapper growing up in the projects playing b-ball" imagery that Hollywood and the Hip-Hop music business likes to show. It was nice to have a central place for children to play soccer and basketball without fear of the ball bouncing into the street.

It was kind of an eyesore having a big fence in the middle of downtown, but it was also the only place for children from ages 8 to 18 to meet up and get some exercise in relative safety from vehicles. From what I've heard, they are going to tear it up and build a playground aimed at a younger audience. I don't know the motivation. Perhaps there are more young parents voting for the mayor. Call me a cynic, but I suspect that it's more likely that the idea came from a construction company that took the mayor out for a few drinks and got the contract. Whatever the reason, I can't vote, and I don't care enough to rouse registered voters into action, so I'll just complain about it here.

In another part of town, I saw that someone had taken a jackhammer to this perfectly good sidewalk. 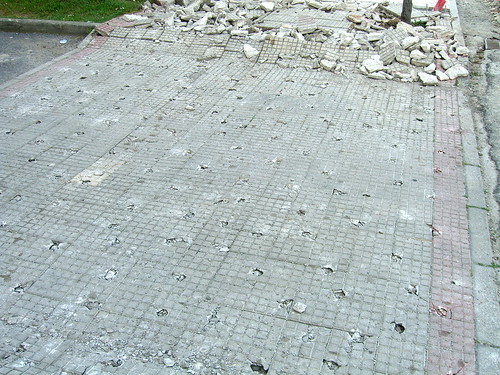 Either that, or we had another hail storm.