On Saturday, I participated in the 2007 Open Golf Playa in Laredo. Yes, we really played golf in the sand.

This photo of Laredo is fantastic! This was the poster they advertised with. Clicking on it will take you to the Laredo Golf Club website.

The event was hosted by the Laredo Golf Club, a group dedicated to getting a golf course built in Laredo or the surrounding area. Along the north coast of Spain, we are right in the middle of a 100 km stretch from Santander to Bilbao with no golf courses at all. It would take me 30 minutes to drive from my house to the nearest courses.

Every year, they hold this event. I called the sign-up number last Tuesday and spoke to Pedro, the organizer of the event. He said that it was a tournament for members only, but that, if I came and spoke with him that afternoon, he would invite me to participate. Apparently they use the word "Open" because it sounds official, not because they know what it means. So I went to the sports complex in Laredo where the various sports clubs hav their offices. I found Pedro and another man putting on a pretty sorry little putting green that some soccer players with cleats had run all over. I told him that I had been living in Colindres for almost two years and hadn't played much golf in Spain, but that I had about a 15 handicap and strongly supported his "golf course in Laredo" cause. So he asked me for my surname, didn't write it down, and told me to show up at 9:45 on Saturday morning near the Red Cross station at Laredo beach.

I was paired with two other golfers that I liked a lot. One was a 25 handicapper, Mario, in his twenties, and another was a nice 10 handicapper, Tomás, close to 50. It was a shotgun start, and we started on the 8th hole.

There were nine holes, from 80 to 160 meters (87 to 175 yards) long, each hole with a distinct distance in multiples of 10 meters. We teed off from a slab of driving range carpet towards the water. The greens were in the super-flat area where the tide had gone out. Each green was a painted circular shape around the hole (about a 5 meter radius). You were only allowed to use your putter when you were inside the painted green. The putting was much faster than on grass. And, believe it or not, all the putts curved down towards the water.

Approach shots, they were all par 3's, would land and roll a good 20-30 yards. I got on only one green in regulation, I was long on 7 of them, and short on the last hole because I was tired of going long. On the first tee, my fellow golfers and I were pretty concerned that the ball would land and dig into the sand and stay there. One guy called up The Committee (Pedro), who was all the way down the beach to ask. He said that if the ball stays in its own divot, it can be removed, but if it's in a footprint, it has to be played. It was a clearly a ruling made by a worthy Committee. At 10:00am, the bullhorn sounded, and we began play.

As I said, we started on the 8th hole. The group in front of us was a foursome of high handicappers, so we ended up playing the 8th and 9th hole, walking all the way down the beach to the 1st hole, but, seeing that they high handicappers were just starting, we played the 2nd hole first, then the 1st. And when we finished the first, they were not close to finishing the 2nd, so we played the 4th, then the 3rd, the 6th, then the 5th, etc.

I ended up with a 6-over, 33. My handicap for the tournament was exactly 6, so I matched my handicap. Mario had a 36 (with a triple bogey) and Tomás had a 31. His putting and short game on the weird surface was better than mine. Pedro, The Committee, normally an 8 handicap, shot a 1-under 26 with four birdies. He clearly knows how his trajectory behaves on the sand. 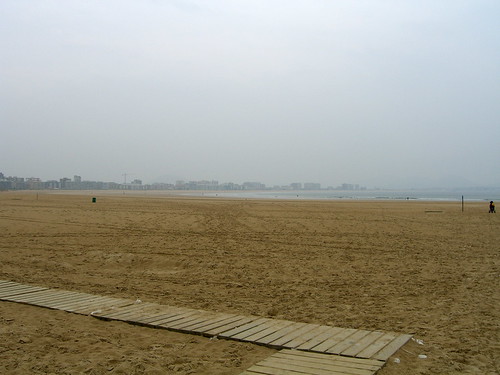 The weather was pretty foggy. You can just barely see some flags way out there in this photo. 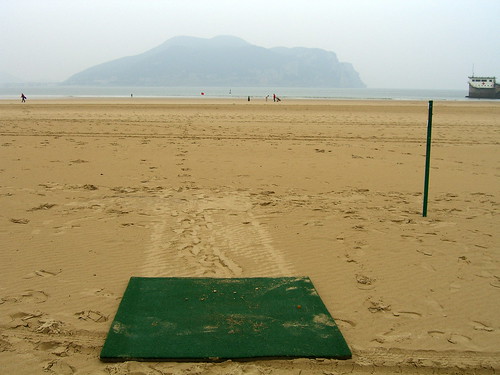 The 8th hole. My starting hole. With no objects out there to give you a sense of scale, a 90-meter hole looked like it could be 200 meters. You just couldn't tell. 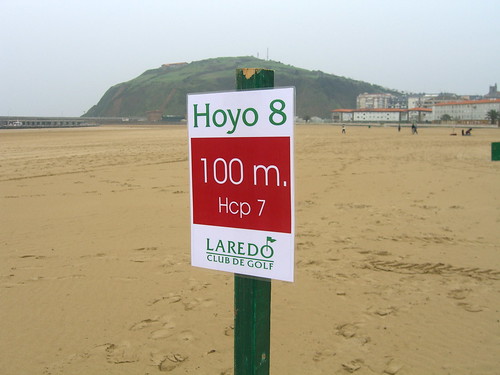 My first hole was an even hectometer. 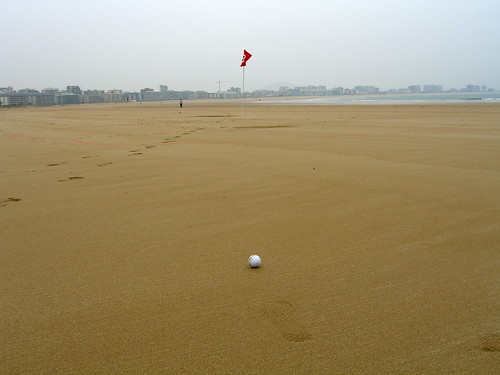 Not yet on the green (in the circle). 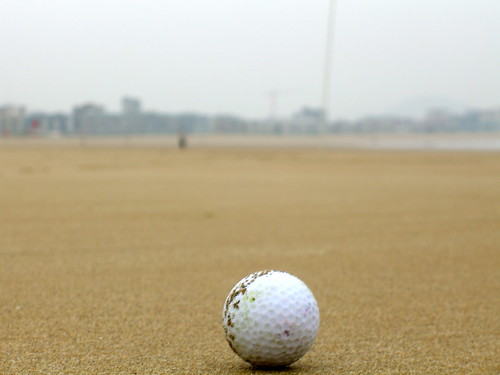 This picture gives you an idea of just how smooth the surface was. 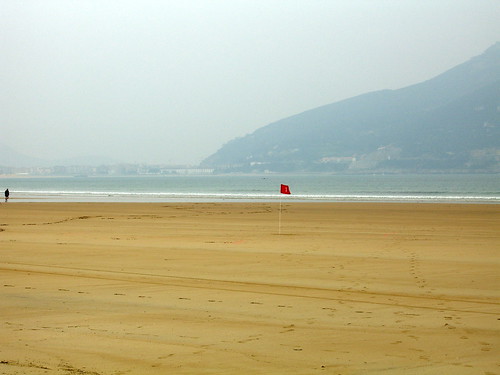 The flag on the first hole. 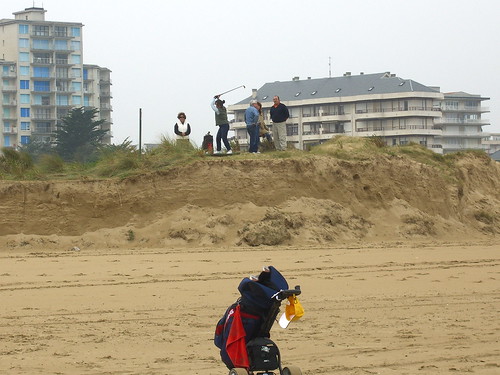 The group of high handicappers hit from the elevated tee on the first hole. There were two women in that group.

Over all it was quite an unforgettable experience. I sure didn't win, but it was clear that I was a golfer. My best shots were considerably better than the best shots of my companions. Later, in August, the Laredo Golf Club organizes another event that is a putting competition on that putting green I saw on Tuesday. After that competition, they award trophies for both the Open Golf Playa and whatever they call that other competition. Hopefully, Marga and I can find the motivation to visit the practice green a few times this year.

My joke on the last hole that, "The only thing this course needs is some grass bunkers," didn't get the reception it deserved.