Some of you might recall a rather intriguing comment I received a few weeks ago from a man named Ã–rn in Iceland. He was inquiring about places to stay in and around Colindres. The reason for his visit was to support the Iceland team in the Junior World Handball Championship qualifier this weekend. I know very little about handball. I first saw it when I ventured to Scandinavia in 1999. The easiest way to describe it to an American is to say that it's a mix between basketball and soccer. It takes the fast paced, high scoring, quick turnovers that make basketball so fun to watch and injects them into soccer, a game that can get boring sometimes because of its lack of those exact elements. I don't really know anything about handball, but it sounded like an interesting thing to experience, and the chance of meeting a blog commenter in person was enough to get me out of bed and headed down to the local municipal gym.

The three-day round robin event started this morning with two games: Iceland vs. Austria and Spain vs. Switzerland. By Sunday, these teams will all have played each other once. 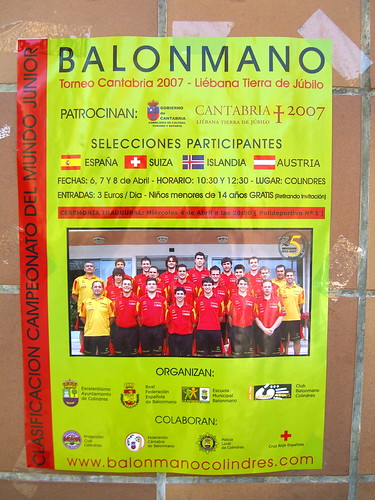 These posters were put up all around town about a week ago. "Balonmano" is "Handball" in Spanish.

When I got to the local municipal sports center, I saw a guy in a red shirt standing outside talking in accented English into his cellphone. When he finished, I told him that I was looking for a guy named Ã–rn on the Iceland team. He said, "I don't know. I'm from Switzerland." Duh! The red shirt should have made that obvious. I paid my three euros to enter and sat down to watch the Iceland-Austria game that had just started. 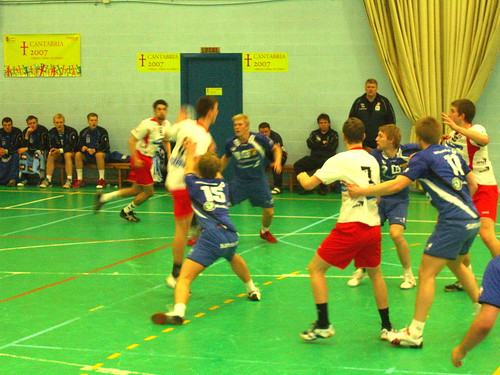 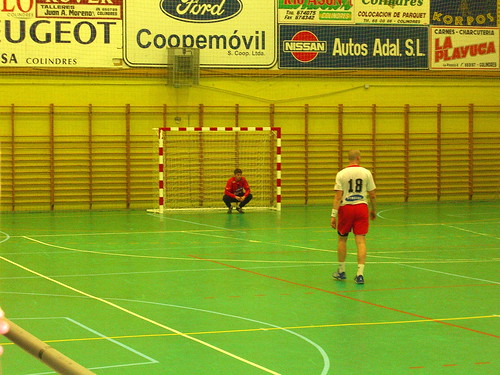 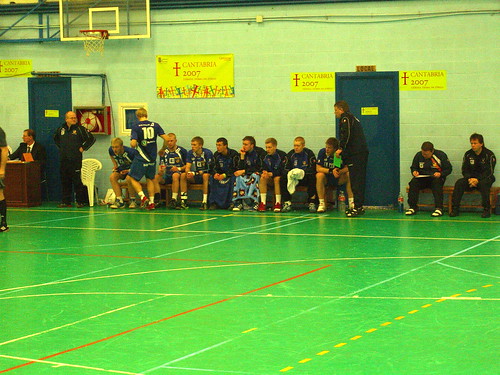 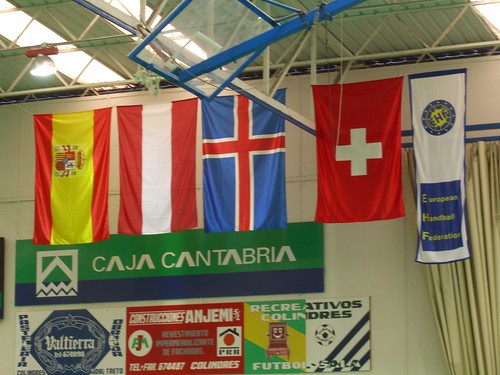 The local organizers even went to the trouble to put up the flags of the four participating countries. 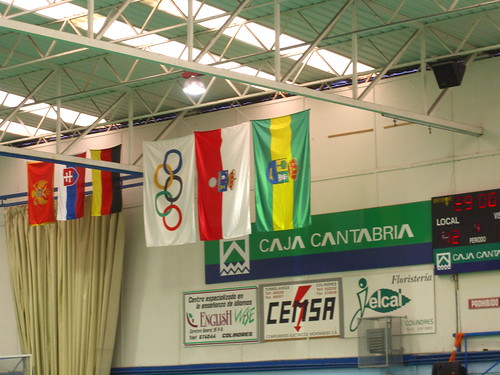 The Olympic, Cantabrian, and Colindres flags. 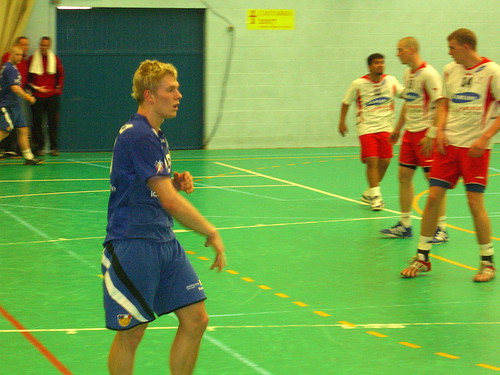 Blond #10 from Iceland seemed to be the best player in the first game.

Right after the first match (2 30-min halves), Marga showed up to watch the Spain game with me. Iceland beat Austria pretty soundly, 38 to 25 or something similar. For the Spain vs. Switzerland game, the stands were packed and the Swiss section had a big bass drum and were making more noise than all of the Spaniards. I don't know if it was the enthusiasm of the crowd or what, but the second game was a lot more energized than the first had been. 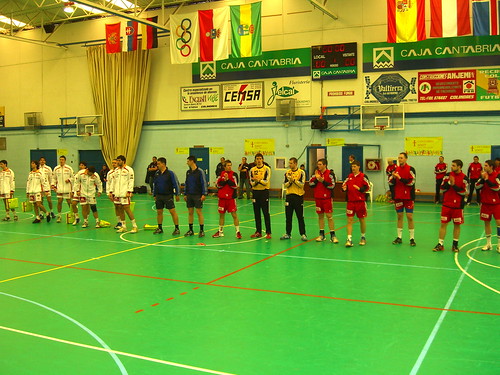 The Spanish and Swiss teams line up for role call. 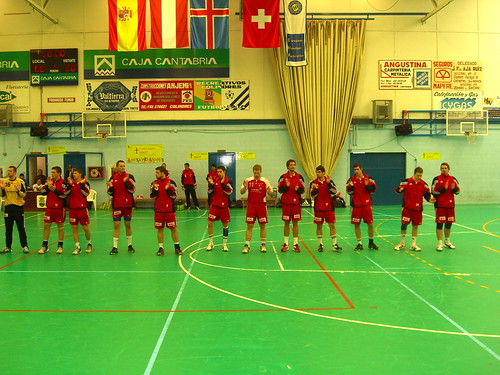 By half-time, Spain was way ahead, and I was a little disappointed that I hadn't found Ã–rn yet. Of course, I didn't have any idea what he looked like. But then I noticed that the Iceland team had showered and were coming back into the gym to watch the Spain-Swiss match, so I went up to one of them and asked if they had someone travelling with them named Ã–rn. He said, in perfect Scandinavian English, that he didn't see Ã–rn at the moment, but that he'd tell me when he did. I went to the bathroom, and when I came out, the player I'd spoken to introduced me to Ã–rn.

Ã–rn and I had a good handshake and exchanged It's-good-to-meet-you's. That's when he pulled off his backpack and said that he had a present for me! He pulled out two packs of dried Icelandic fish and gave them to me. He said that he also brought some schnapps (a favorite Scandinavian beverage), but that the authorities in Heathrow took it from him. I know how that feels.

I haven't tried the fish yet. I must say that it doesn't look all that appealing, but I'll put anything in my mouth once. The gesture was much appreciated. To think that he brought something all that way just for a guy who sent him some local hotel phone numbers really reminded me of just how polite the Scandis are. 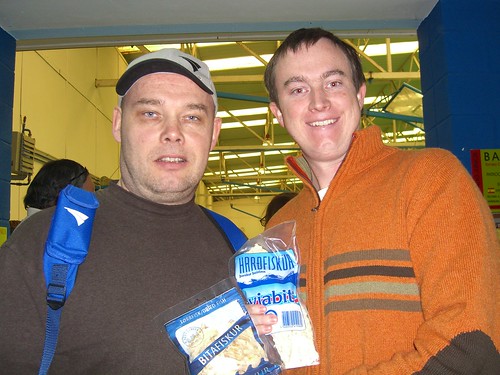 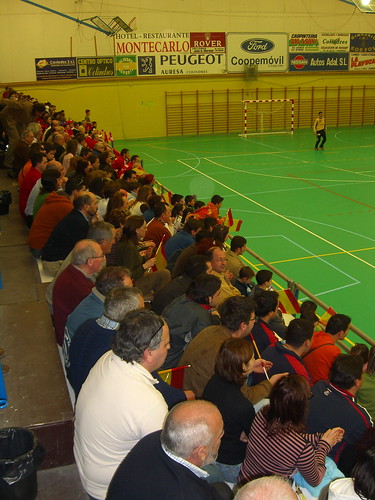 The stands were packed.

With about 10 minutes to go, Spain was up by 12 points. That's when the Swiss really turned on the heat and dominated the last ten minutes. However, when Spain found themselves with possession, a 3 point lead, and 60 seconds left, everyone knew that'd won it. They casually passed the ball around, scoring one extra goal before the time ran out. If there had been two more minutes in the half, they would have lost. It wasn't the kind of victory you feel that proud of after the game, despite their excellent first half play.

All in all, it was a pretty nice morning of international sports. Very different, but different is good.