My first name is quite rare in Spain. However, it is common enough that people don't just say, "Huh?" when I tell them my name. And for some reason, probably the Basques (the source of all native usages of the letter 'K' in this country), most Eriks in Spain spell their name as I do. But it's still very rare!

So, imagine my surprise to find this written on the side of my building! 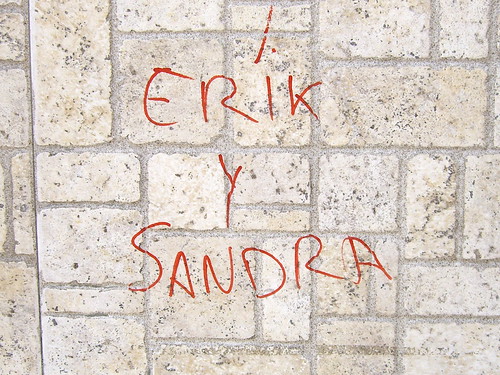 As if the romantic intention of two names scribbled on a wall wasn't obvious, the "artist" thought to emphasize the point: 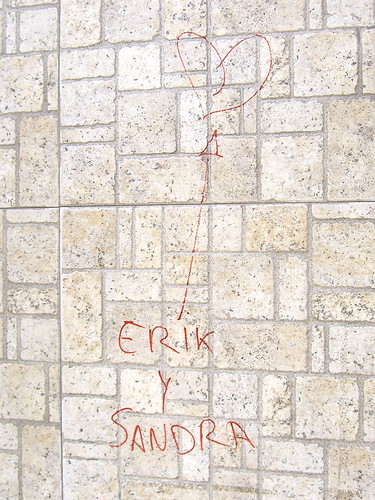 Thankfully, there's not even a sliver of jealousy in my relationship with Marga. If there was, it would be pretty easy for her to conclude that this was the work of some bunny boiler lover of mine.

In fact, thinking of the amount of jealousy in our relationship reminds me of my favorite golf joke...

So this guy goes out golfing with his buddy. On the third hole, they catch up to a twosome of women, and the women ask them to join them for the rest of the round. The women are very attractive, so they happily agree. Throughout the whole round, this guy notices that one of the women is really flirting with him heavily. She's very sexy, and he flirts back. At the end of the round, she invites him back to her place for a drink.

Back at her place, the drink loosens things up, and they end up having passionate sex. When the man wakes up a few hours later in her bed, he's completely stricken with guilt. He tells the woman that this was a mistake, and he really loves his wife, and he hopes his wife will forgive him.

On the drive home, he is tormented with guilt and decides that the best thing is going to be to just come right out with it and tell his wife what he's done and that he's very sorry and plead for her forgiveness.

He gets home, his wife, looking a little upset already, says, "Where have you been?"

He says, "Look, honey, I'm just gonna come right out and say it. I met this woman at the golf course, and I went home with her and we had sex. I'm so sorry! I hope you can find it in your heart to forgive me!"

His wife is furious! She looks him straight in the eye and says, "You stayed and played 36 holes, didn't you!?!"

I dedicate this post to Sandra, whoever she may be.