This past weekend we attended an intensive two-day dance workshop in Suances, a town about an hour west along the coast. On Friday night, there was a dance exhibition and disco in a neighboring hotel. On Saturday morning there were 2 hours of classes in the morning, 2.5 hours of classes in the afternoon, and then a larger dance exhibition (they actually sold tickets to the public) and disco in the big gym where we were taking our classes. On Sunday there were 2 hours of class in the morning again, and 2.5 in the afternoon.

Because we signed up and paid early, the whole thing, 9 hours of classes, two salsa discos, two dance exhibitions, 2 breakfasts, 2 lunches, 2 dinners, and 2 nights of lodging cost us what just the lessons or just the hotel would have cost if we hadn't done it in an organized group. There were at least 100 people there, skills ranging from jaw-dropping professional dancer to considerably worse than us.

We got to the hotel at about 19:30 on Friday and had time for an 90 minute nap before dinner. After dinner we all went two blocks away to another hotel for the disco thing. First there was a dance exhibition of some weird modern ballet sort of thing. Young men lifting apparently weightless young women in graceful, flowing motions. It was entertaining to watch.

Afterwards, the DJ turned on the salsa music and people took the floor. We stood back to watch. The salsa dancing we witnessed was amazing! Hips undulating, girls doing dozens of spins only to pull out of it right in rhythm with the music. We knew they were way out of our league after about 15 seconds. Too self-conscious to clumsily spatter finger-paints next to these Da Vincis, we kept to the side of the dance floor and watched the mesmerizing spectacle. Salsa dancing, like most things I suppose, is absolutely beautiful when well executed. Among the dozen couples zipping around the dance floor, there were 3 or 4 couples that really drew our eyes. We just couldn't look away. Eventually we got tired of feeling so inferior and left for our hotel, glad that the thumping dance music that would continue for another 5 hours was in a hotel two blocks away and not ours.

On Saturday, we were up before most of the attendees, who'd had had a late night, and got an early breakfast (9:30. This is Spain, remember.), and headed into the small town center of Suances to run some errands. Marga bought some boots that she's been threatening to buy for six months now, and I bought a pair of sneakers. They were on sale. Both pairs of footwear were less than a third of what they would have cost us elsewhere. Not a bad start to the morning! 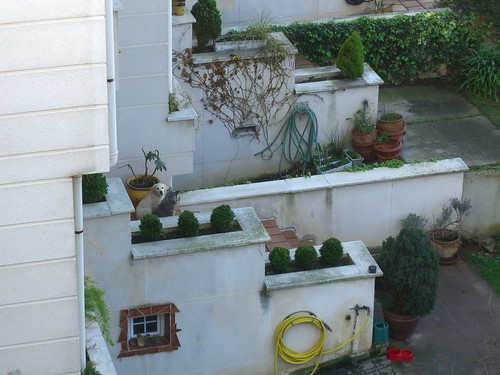 This old terrier and labrador pup in the yard next to the hotel made a pretty funny pair.

By noon we made our way to the town recreation center, where the classes would be held on the municipal basketball court. 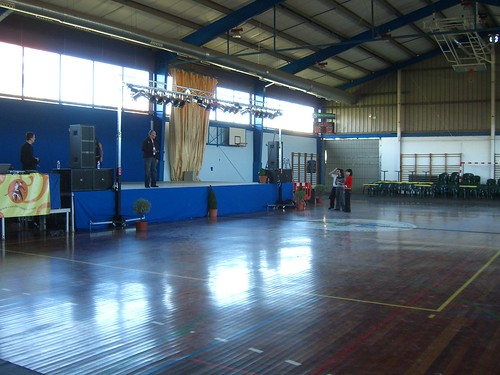 Luismi, our regular salsa teacher and organizer of the entire Suances event, tests the wireless mic on stage.

There were two levels of classes, advanced and basic. Luismi had told us that we would get more out of the advanced class and that we were good enough to follow along. The 2 hours of morning classes were divided into two separate classes with different instructors. We immediately recognized the instructors as one of the couples that had wowed us the previous night. Of course they danced well! They were the bloody professional instructors!

After the first class, they said, "Okay, we'll do it one more time so you can record it," and everyone ran to where they had left their stuff in the bleachers and pulled out camcorders. What a great idea! I had left my camera in the hotel room, but I vowed to bring it to each subsequent class.

It's not that the classes we took on Saturday morning were useless because we forgot what we learned. It's like learning a song on the piano or guitar. Even after your forget the song, you're still a better piano or guitar player for having learned the song.

The first class in the afternoon was Cha-cha-cha, a close cousin of salsa. Here's the routine we learned. The first part that they do apart was the warm-up. By the end of the lesson, we could do all this pretty well. Not with as much grace and smooth hip movement as you see here, but we had the steps and the spins as shown.

The second instructors of the afternoon were the most impressive. They were from an Italian dance company in Milan called Tropical Gem. The guy speaking here had a body that Leonardo would have wanted to sculpt. This first video is the warm-up they taught us. It is more of a choreographed dance routine that you'd see dancers on stage doing while an artist is singing their song. He thought it was really important that we do certain parts of it while certain lyrics were being sung. It's a song by Marc Anthony, J-Lo's hubby.

Here's the same thing, but with music:

This next video has the two routines he taught us. We could do both of these pretty well by the end of the class. We'll have to relearn them with this video. The hand-play thing at the start of the second one was particularly hard for me to get for some reason. 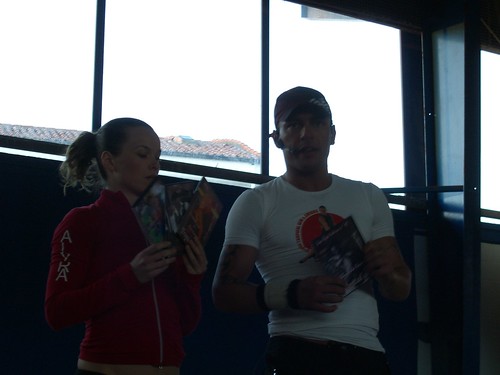 After dinner on Saturday night, we headed back to the municipal gym for the exhibition. The people giving the exhibition were all the instructors we'd had, plus a few dance companies that had been hired especially for the exhibition. Afterwards, we danced a little during the disco, drank our one package-included free drink, and went back to the hotel. We were some of the first to leave at 3:00. There's just so much dancing you feel like doing after spending all day in dance classes.

I put a couple videos I took of the Saturday night performances on YouTube: here and here. The first is zouk (see below), and the second is just mind-blowing rhythmic acrobatics.

On Sunday morning, we visited a local landmark. In her office at work, Marga has a calendar of famous landmarks around Cantabria. By complete chance, the landmark for March 2007 is the Lighthouse of Suances. Marga explained that it was built in the 19th century and then renovated and converted to electricity in the 20th century. 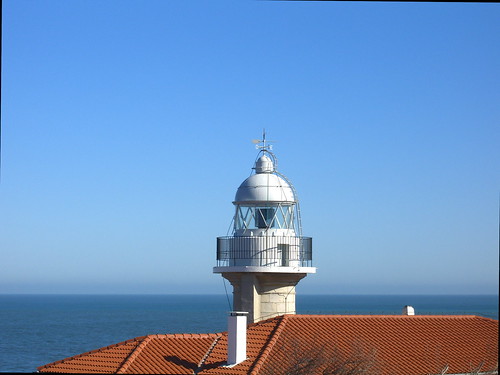 There she is, in all her glory. We could see the beam sweep across the sky at night from our hotel. 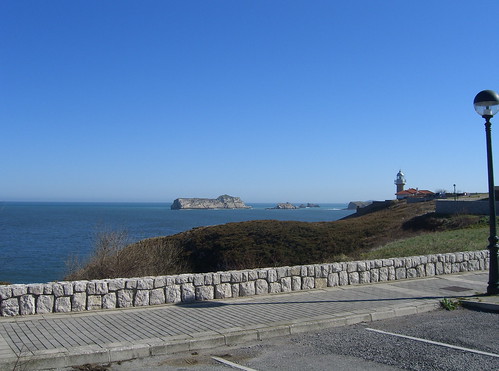 The lighthouse from further down the coast.

This was about the time when we were admiring the beautiful sea view, and I turned around and said, "Oh my god, look at that!" Behind us was a range of snowy mountains and more water between us and them! 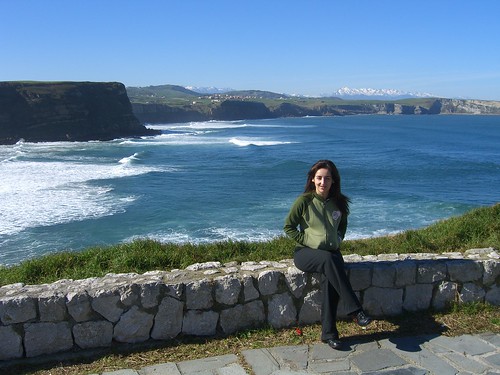 What a gorgeous view! 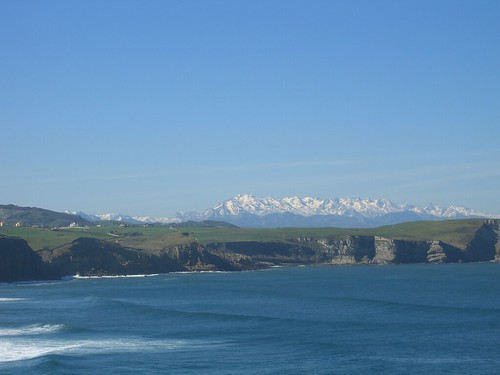 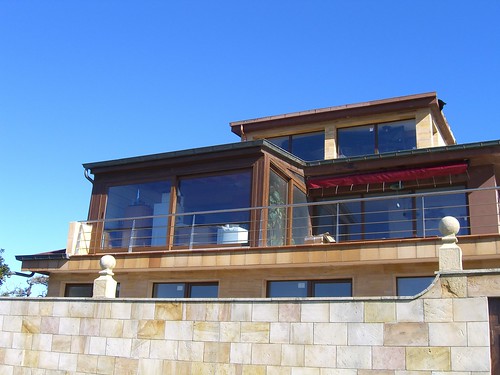 The people that built this house knew what the value of their location was. I hope they know not to throw stones. 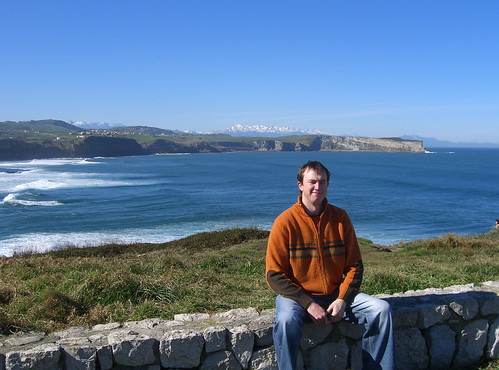 Squinty wanted his picture taken too. 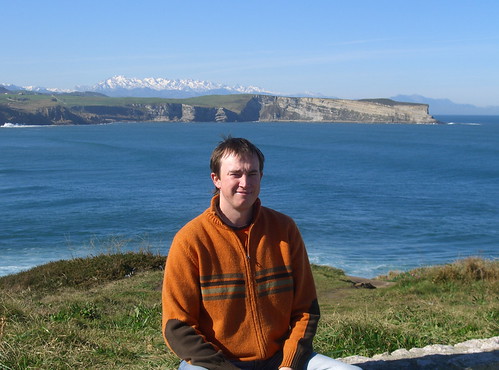 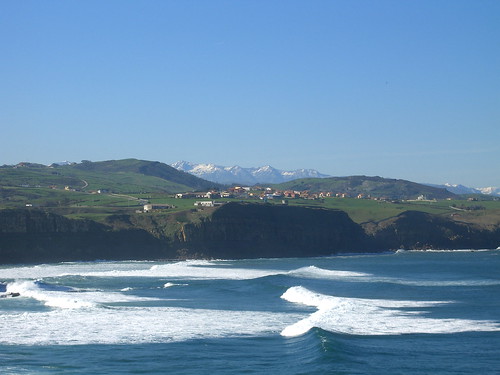 The waves made such a nice white noise. 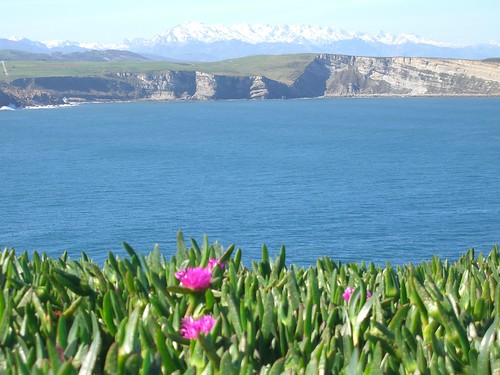 There were a lot of these flowers around. It was clear from the vegetation that this area got a lot of strong wind. 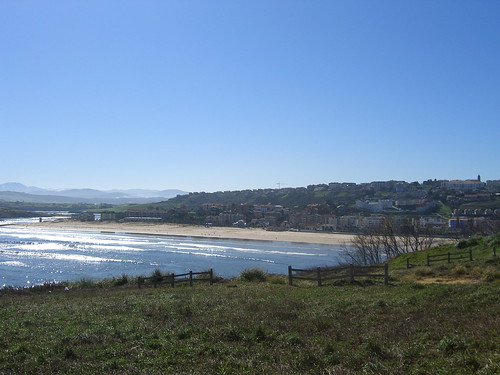 Looking back towards the beach and town of Suances. (pronounced "SWAN theys", by the way) 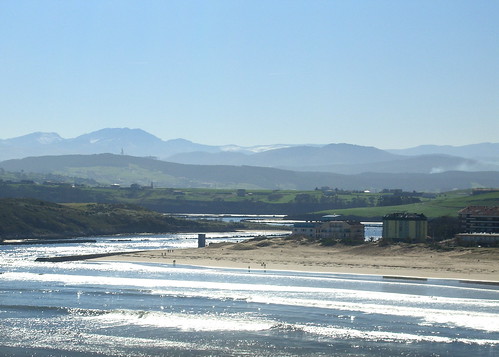 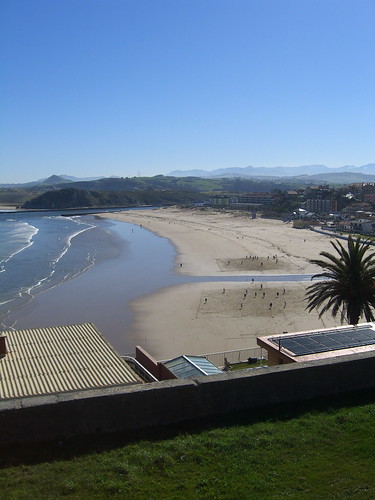 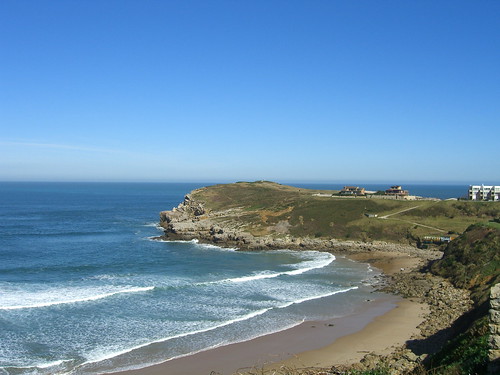 Looking back towards the peninsula we'd been on taking the pictures of the mountains.

I thought we did pretty well starting from zero zouk knowledge. The back bending stuff was pretty fun. Here's the demo they did for us after the class:

The second class of the morning was in bachata, another caribbean cousin of salsa. We know bachata from our weekly lessons, and we didn't learn much in this class. But the teacher was so energetic and charismatic that the whole class was smiling for the entire hour. This is the guy that teaches all the teachers in this area. Luismi, our regular teacher, learned most of what he knows about bachata from this guy. It was nice having at least one class that we didn't completely suck at.

The afternoon classes were by the Italian Tropical Gem folks again. It was complex salsa that challenged us, but in a good way. The instructor has a style about him that can might have made me guess he's from Milan even if I didn't know he was. Check out how he's wearing his sweatshirt in this demonstration:

The second afternoon class was by the other couple from Milan. They struggled a bit more with their Spanish, and did a lot of counting in English. They give classes in English in Italy.

Ditto, but with music: 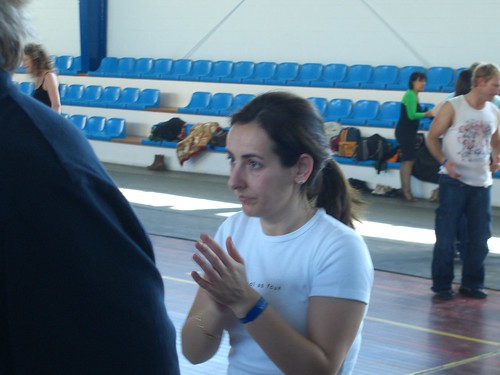 Between demonstrations, I turned around and snapped this picture of my dance partner. We had to wear these "you gotta cut 'em to get 'em off" bracelets all weekend to prove that we hadn't just wandered in off the streets.

Back home on Sunday evening, we barely had energy to fix some dinner before collapsing into bed several hours earlier than normal. My feet and ankles are pretty sore today.

Overall we enjoyed it a great deal and will try to go to similar future events.