Marga spent three separate days, in three separate cities, with her mother, sister, and Aunt Marga trying on wedding dresses. She tried at least 50 of them. The final winner is from a shop in Santander. The final product costs about a month of Marga's salary. Of course, I was perfectly content to let societal norms prohibit me from attending such shopping sessions.

Marga described the process to me beautifully. She said,

I like the idea of dress selection as a microcosm of husband selection.

I have two suits. It didn't make much sense to me to buy another one, but Marga's family said, "Yes, you have to buy a new suit for your wedding!" It was Marga, the brains of this whole operation, that came up with the best argument about my wedding day attire. She said, "How different is the suit you would buy from the suits you already have?" The answer is that it would be identical.

When the wedding dress judges (Marce, Aunt Marga, and Belén) came over to visit on Saturday, they said, "Okay, let's see what your suits look like." I pulled out the cheaper one first. They all agreed that it was very elegant and would do just fine for the wedding. Then I pulled out the nicer one, and they oohed and ahhed and gave the thumbs up. They still insist that shirt and vest shopping must commence soon, and that I'll need to bring my better suit along for matching. Yay.

We visited several wedding photographers around Mondragon. They are all very nice. All pretty much the same. All incredibly expensive. It's all digital these days, of course. They will give us a nice hard-cover book of pictures. They offer two smaller versions of the book for each set of parents. They give you a PDF version of the book as well. And even a CD containing all the hi-res pictures that they took. This, of course, pleases a photo hound like myself a lot. The photo montages they do look nice, too. On the whole, I'm very happy with our choice of photographer.

They give us a discount if we let them try to sell photos to the wedding guests. After the ceremony, they run back to their shop and print up what they have so far. Then, at the restaurant, they display the photos on a table, and the guests can choose which ones they want. The photographers later print up the photos and mail them to the guests' homes. It seems like a service I would even pay for. It works particularly well in this case, because the American guests sure can't "just stop by the shop" the following week to pick up their prints. I love ideas like that that benefit all parties involved.

It never occurred to us to hire a videographer. But Marga's Uncle Antonio insisted that it was a good idea, and that he knew a guy that did it. We said, "Naw, we don't need that," but he insisted that we did. He even offered to pay for it as our wedding gift. So we took the information from him and went to visit the videographer on Saturday evening. We had to go to Zarautz, a beautiful little beach town near San Sebastian. We were still pretty skeptical going in, but the videographer sat us down with one other couple (some 21-year-old kids, also from Mondragon) and showed us some examples of his work. An hour later, he finished his spiel and we were convinced.

Sometime this summer, whenever we decide to, we'll call him and he'll come to Colindres (Zarautz is 90 minutes away) and he'll shoot some footage of us walking around town, walking on the beach, doing silly lover things with ice cream cones, etc. He's really good at making couples laugh and look happy together. Then, he'll come to the wedding, tape the pre-ceremony photo shoot, the ceremony, rice throwing, dancing, etc. and professionally edit the video. His studio was very impressive. He said that if we wanted to put in the effort to help (and we do!), we could put subtitles in English for when Spanish is spoken and vice versa. Then we get eight DVDs.

We have to bring him some pictures of ourselves together, as well as some childhood pictures. I will have to get my folks to bring a dozen or so when they come. We also have to pick background music. He said, "Yeah, we'll have to be extra careful with the music, because the audience will be able to understand the lyrics." A great example was that one of the videos he showed us used an upbeat French dance song that was popular in Spain a few years ago called Désenchantée. If you don't know the lyrics, it sounds like a really cool, happy song, but even I understand the title of the song enough to know that it's not a good choice, lyric-wise, for a wedding video.

He told us that there's another special deal that he offers. If we let him and his cameras into the hotel room on our wedding night, he'll do the whole video for free. This got some nervous "he can't be serious" laughs from the four of us. Before things got too awkward, he said, "I've been doing this for more than 20 years, and not one couple has taken me up on that offer. Oh well...". No doubt he does the same joke every time.

This videographer guy was really something. He didn't smile that much, but he had a ton of charisma. We liked him a lot. He even invited us out for a local specialty tapa of grilled foie gras. I think it was probably the most beautifully presented tapa I've ever seen. The texture was kind of strange, but then again, it is the fat around a duck liver. 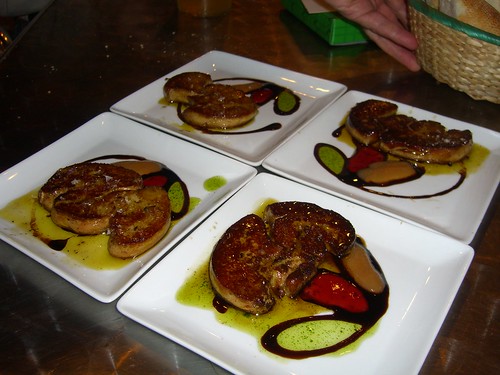