In response to my Night Pics From Around Town post a few days ago, my Uncle Neil sent me this email and picture...

Good Morning Erik, I took the attached picture just a few minutes ago. This Underwood typewriter belongs to your grandmother. This is the first typewriter your father touched when he was a boy. Do you think he said, "Wow! Look at that! It's an analog word processor!" Actually he used to pound the keys, pretending it was his baby brother, until several of the letters were jammed together.

Erik do you believe in genetic memory? Why is it that a black lab will retrieve every tennis ball? Husky sled dogs love to travel. Are computers basically digital word and photo processors?

I wrote all my undergraduate and graduate papers with this machine. If you would like to have it you can but I don't know how to crate it and it weighs close to 40 pounds. I would have to be inspired to do that. It still works as good as it ever did. Carol and the whole family will tell you that it built great strength in the little finger of your left hand trying to make a firm "a". If it was an important paper you usually emphasized the "a" using another finger.

Thanks for keeping up your blog. I never go anywhere on the weekends myself.

Feel free to use any part or all of this message. In fact I would like to see the photo on your blog. 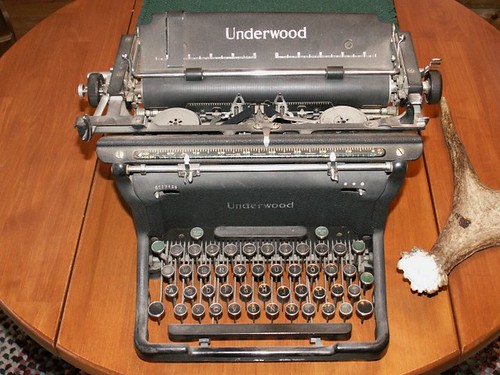 Thanks for the heirloom offer. If I lived a thousand miles closer, I might accept it. It might look cool in my office next to all my high tech equipment.

Do I believe in genetic memory? Well, unfortunately genetic memory is not a politically correct term these days, but I understand what you mean. All the cool kids these days call it evolutionary psychology or EP.

Of course I believe that certain species instinctively know how to do things. It's a scientific fact. Bird and fish migration comes to mind as the most obvious example. Specifically explaining the mechanisms behind it is another thing. Presumably hundreds of PhD students are working on EP studies right now.

As for your extension of EP to suggest that I was predisposed from the womb to end up typing on a keyboard right now, I think that's stretching it too far. My parents are intelligent and were interested immediately in the mechanics of the first early personal computers, but I don't think that has anything to do with typewriters or an innate desire to produce legible documents. My interest in computers is almost entirely environmental, in my opinion. But then, I'm also the son of a Skinner Behaviorist. Any genetic predisposition to my profession came in the form of a logical, organized mind with a love of solving problems with creative, elegant solutions. With these traits, if I had been adopted by other parents, I could just has well have been an architect or an auto mechanic or a detective or a lawyer or a doctor. Okay, maybe not the last two. I have a distaste for rote memorization.

Thanks for contributing, Uncle Neil!