New Year's Eve is called "Noche Vieja" ("old night") in Spanish. The wisest thing my driving instructor told me a couple weeks ago during my relicensing was, "The holiday season is great when you have everybody, but it really sucks when you're missing someone." This year's New Year's celebrations were somewhat dampened by the fact that one of Marga's uncles died in February 2006. His widow, Aunt Marga, was understandably sad all weekend, not wanting to say adios to the last year she began with her husband.

On Saturday morning, I went with Juan to "milk the chickens", as he says. 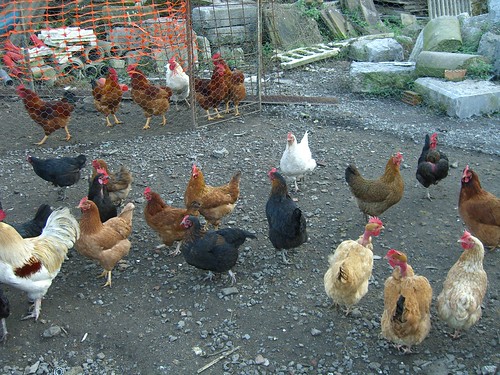 The roosters are kept in the far pen, separate from the hens. 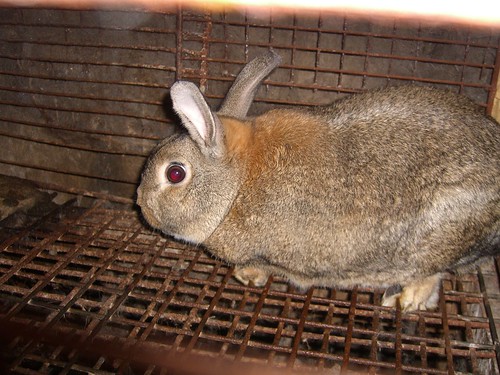 I took this picture for wascawy-wabbit-cwaving Uncle Neil. 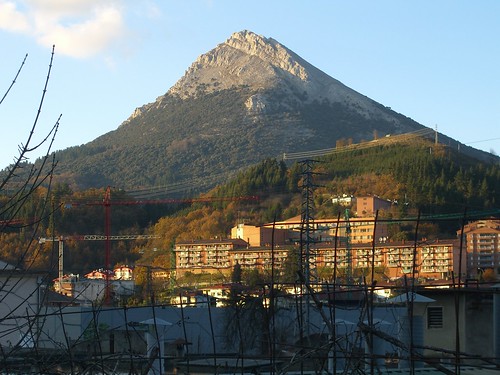 I have a lot of pictures of this mountain, taken from where Juan has his chickens, but the sun was hitting it so nicely, that I couldn't resist another shot. 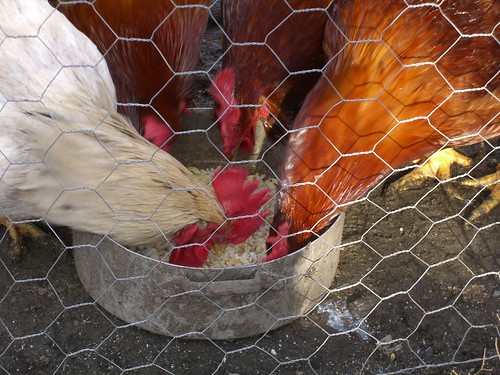 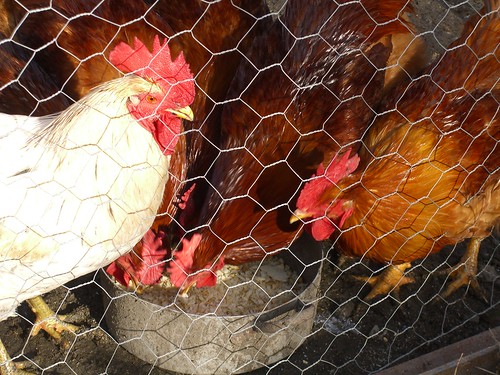 One white one and about six red ones.

After lunch on Sunday, Grandpa Ramón said he wanted to walk up to the cemetery. They go up there pretty often these days. The Spanish are gravestone mourners. Some genius decided to put the cemetery halfway up a mountain. Everyone looked at Grandpa with a "you're too old to walk all the way up there!" expression. With a full tummy and a big feast coming that night, I offered to walk with him up to the cemetery. It did turn out to be a lot of steps and walking up a long steep road, but at an octogenarian's pace, it was a pretty trivial climb for my 28-year-old cardiovascular system. With the exception of wanting to warm a bench about 200 yards from the finish line, Grandpa made it just fine the whole way. He really is an ox. When we got to Uncle Jose Luis' grave, Ramón thanked me for coming with him. Those "you're too old" stares annoy him. 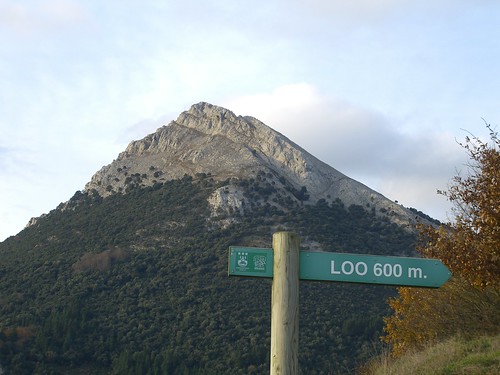 I took this in the cemetery parking lot. I'm not sure what the sign means. I'm pretty sure it's not pointing you to some restrooms a third of a mile away. Loo might be a place, like Poo is. [snigger!]

The traditional staple of the New Year's Eve feast is shrimp. Lots of shrimp. Uncle Antonio brought this great electric pan for cooking them. 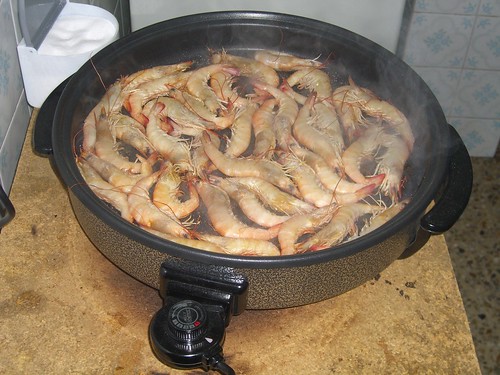 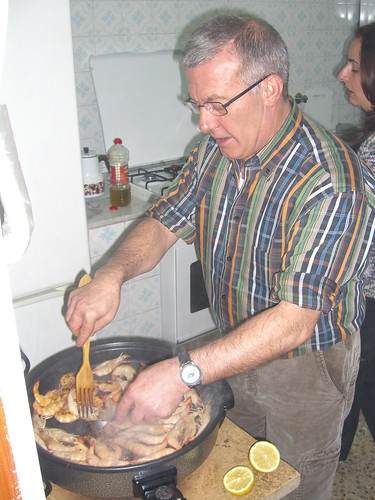 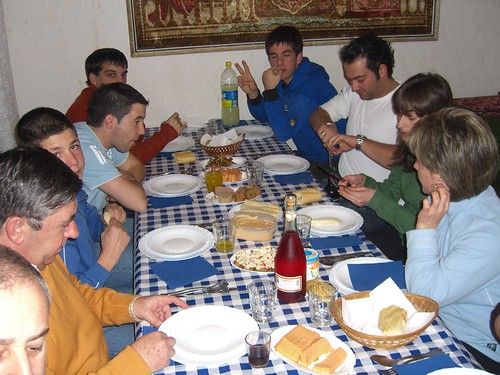 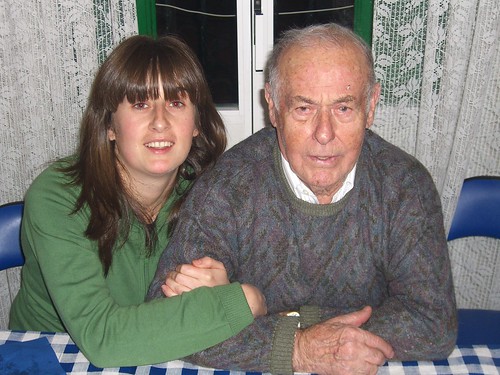 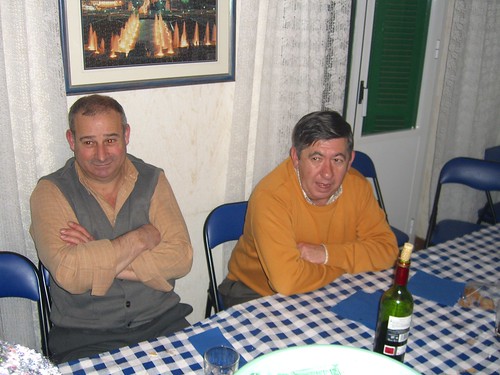 Once, in the middle of the meal, out of nowhere, Juan said, "I wonder what Paul and Betsy are doing now. They're probably out with the dogs, since it's still early evening there." This prompted Uncle Ramón to say, "Wow, you even know the names of their dogs!" I jumped in with a, "No, those are the names of my parents," embarrassing Uncle Ramón. I went on to explain that it was a pretty simple mistake to make, and I pointed out that the names of the women across the table from me, Manoli, Marga, Marcelina, and Inés, are all weird enough to the American ear to be pet names, especially since they have no real translation to an English name, unlike Juan (John) or Ramón (Raymond). I said that my parents' names do actually translate to Spanish equivalents: Pablo and Isabel. 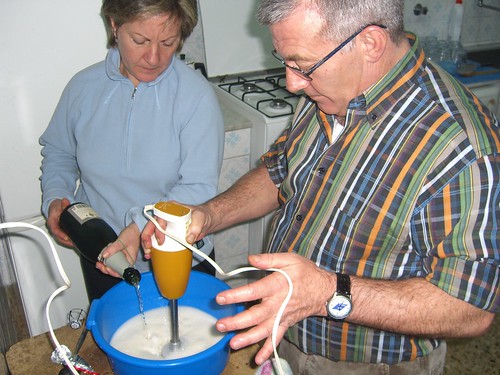 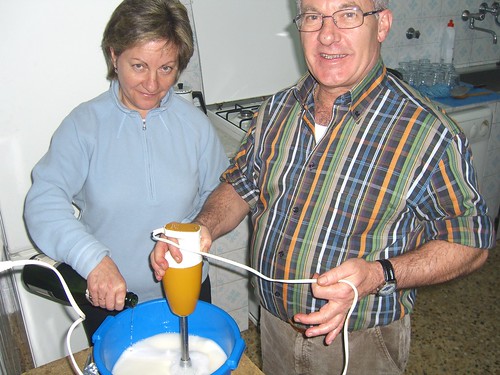 We went out to some bars after dinner and the midnight grape consumption ritual, but we weren't much in the mood for loud music and alcohol, so we walked home and were asleep by 4:00 AM.

Somewhere in the conversation, Uncle Ramón started telling me about a cucumber liqueur that he has. So on Monday, before we left, he brought some over for me to try. It was pretty good. I leave it to you to figure out how they get the cucumber in the bottle... 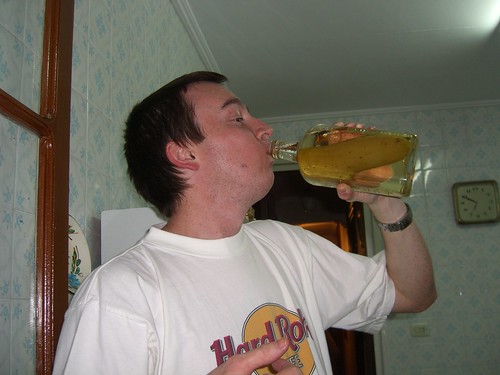 Yes, there really is a cucumber in the bottle.