Last Friday we left for Mondragon. I had to get up early (by Spanish standards) to play in the chess tournament at 9:00 am on Saturday morning. I went to bed early, reading a book that my father gave me last Christmas, called How To Beat Your Dad At Chess. I got up at 8:00, showered, and had breakfast. It's a 20 minute walk to the Extremadura Cultural Center, where the chess tournament was. Due to one of the clocks in Marga's folks' kitchen being 10 minutes slow, I ended up leaving the house at 8:45, half-jogging, half-walking as quickly as I could towards the Center. I got there at 9:01. It was closed.

A minute later, a woman showed up and opened the door and began cleaning. I asked here if the chess tournament wasn't suppposed to start at 9:00. She had no idea. She thought that the local team was going to come at 9:30 to set up the tables. After a few phone calls, her story turned out to be the correct one. So I sat and read a paper for a half hour. Finally the main tournament organizer (the guy that I met before) showed up with a few other guys, and we carried some boxes with chess boards, pieces, and clocks up to the main room of the Center and proceeded to set up tables and boards and pieces. By 10:00, more chess teams began showing up from the surrounding area, some from as far as an hour away.

There were ten teams of four players each. One of the teams had only three players, so I was assigned to that team. While things were getting organized, the main guy suggested that I play some practice games with another guy from the Mondragon team. In the four quick games I played with him, I went from looking like a complete idiot to actually holding my own for a couple minutes in the last game, before my clock ran out. Those practice matches helped me immensely.

The first part of the tournament was a round robin between all teams. I was the fourth seed (the fourth best player) on my team, so I played the fourth seeds of all the other nine teams. We played 10-minute games (five minutes for each player). I have no experience with playing timed chess games. A few times I completely forgot to hit the clock, allowing my opponent to move during my time. Some of these guys could make a dozen moves and still have 4:47 remaining on the clock. Needless to say, it was very stressful.

I lost two or three games in less than 10 moves to variations of what I know as "fools mate", which Wikipedia has just informed me is really called "scholars mate" ("fool's mate" is something else). Basically, it all comes down to a knight and bishop and queen attacking your king's bishop's pawn. If you aren't well-practiced in defending against such attacks, you can lose a chess game really fast! Surprisingly, of the nine matches I played in the first part of the tournament, I actually won two! My pride and I were very pleasantly surprised.

I lost quite a few of my games due to making illegal moves, moving a piece the wrong way by accident, or moving a pinned piece, or not noticing that I was in check and moving a piece that didn't alleviate my check. You see, no one says "check" when they put you in check. Either you notice and you do something about it, or you don't, and you forfeit the game. On the one hand, I can see that, in a 10-minute game, there's not much time for telling the other guy that he's made an illegal move and making him do it again. But, on the other hand, it seems pretty stupid that you can lose a game by not noticing a check, and making a move that any computer program wouldn't let you make. I even politely corrected one of the guys that I eventually beat when he made a bad move, and my teammate explained to me, after the game, that I didn't have to do that; I could have just said, "game over, you lose". It's pretty cutthroat out there!

After the first round robin, the top five teams were broken into one group, and the bottom five into another, and we played another round robin against the four other teams in our group. My team just barely made the top five grouping, and we ended up placing fourth, despite losing all our fourth seed (my) matches in the second part of the tournament.

When we finished, there was a lunch prepared for us. Before lunch was ready, I went and had a couple wines with Marga's father, uncles, and grandfather at the bar. They are usually there right before lunch on weekends. The meal was pretty mediocre, but I enjoyed the company. The guy to my right was a computer programmer and the guy to my left had spent a year in Leeds, England. My Spanish vocabulary excels at conversations about how strange the British are compared to the Spanish.

I was introduced to the team from Cantabria, and they told me that, if I was interested, there is a chess club that plays in Laredo, the town neighboring mine, on Saturdays. I'm kind of torn about the issue. On the one hand, we don't really have many friends around where we live, and it could be a good activity to make some friends. On the other hand, chess nuts are weird! The majority are unattractive and socially awkward nerds. Plus, I'm not really sure that I'm that interested in spending time studying a board game. I'll have to think about it. 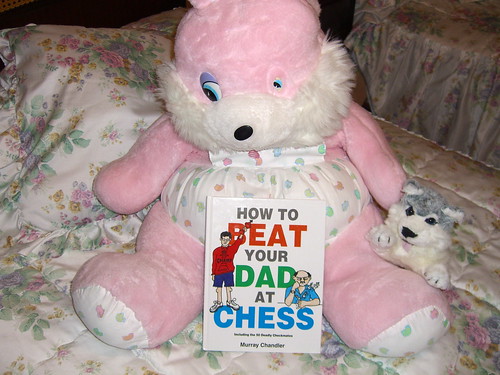 Me and the one-eyed bunny studied my book before the tournament. 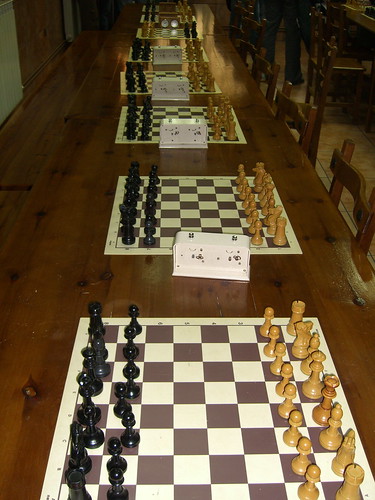 The clocks for most of my matches were digital, but some of them were the noisy tick-tick-tick kind that must really grate your nerves. 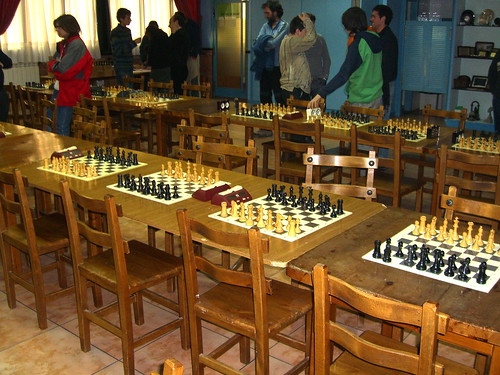 This format was very good, because everyone was playing all the time. I took this during a break between matches.

Our Christmas celebrations were pretty tranquil this year, compared to other years. All the aunts and uncles were with the other side of their family, so it was just Marga's folks, sister, and grandfather that we celebrated with. We had a huge meal on Christmas Eve (Noche Buena) and again on Christmas. We didn't do any of the crazy singing on Christmas Eve that we've done in past years. Here's a video from last year.