Marga's folks, Juan and Marce came over for the weekend. Lots of wine and food were consumed.

On Saturday afternoon, Marga had the idea to go bowling at the mall in Santander. It was a dark and rainy day, and it turned out that quite a few other people had the same idea. We had to take a number and wait an hour to get a lane. I think this was the second time ever that Juan and Marce have bowled, and I was there for their first time, two years ago. My experience as a member of a bowling league when I was 12 (or 10?) shone through, and I put up two scores of 168, which is pretty good, considering that my personal best, from 15 years ago, is 185. In the second game, I almost had a turkey in the tenth, if you know what that means... My performance at the lanes, having not bowled in two years, and my memory of salsa dance steps when we went out last Thursday, combined with my ability to play golf once a year with very little skill degradation, has convinced me that I have better-than-average neuromuscular facilitation. Throughout the weekend, Juan and I were put to work fixing little things around the house. On Saturday, we figured out how the rotisserie apparatus built into our oven worked. We also hung a clock and cleaned and refilled the wine cask.

To answer some of your questions about the cask... Since we filled the cask, the wine steadily got better and better over the course of three weeks. The wood was clearly aging the wine in a good way. Then we went away for two days, and when we came back, the cask was full of vinegar. It was disgusting! Juan explained what our mistake was. On top of the fact that it was the first batch of wine in the cask in several years, apparently the cask can't be even a little bit empty. After you've taken a couple of liters out, you have to fill it back up. Personally, this sounds more like advice to protect the wood than to protect the wine, but I openly admit my ignorance of such matters, so I could be wrong. Unfortunately, this defeats the idea of bulk wine purchases to fill the cask, since filling it from a multi-liter bag/box of wine is a pain (and therefore not something you want to be doing every week). Juan and I removed the remaining two liters of vinegar from the cask, saving it for "cooking", and filled it with warm water several times, sloshing it around inside to clean out every corner. That's quite an upper-body workout, let me tell you. When it was clean, we went out to buy some wine. We chose a wine from my local grocer that Marga and I have found to be the highest quality/price ratio in town. We bought a dozen bottles, 9 liters, for 15€ ($20). For that price, this wine is surprisingly good. A little later, we put all twelve bottles into the cask, plus another half-bottle that we had lying around from a previous meal. I'm a little disappointed about this new cask rule. To me, a bottle is much more convenient than a cask, and buying refills by the bottle seems to defeat the purpose of having the cask. It is still pretty cool, though.

On Sunday, we did our best to hang one of Juan's chickens in our oven rotisserie. In the end, we failed, but we learned a lot from the experience. First of all, the bird was huge. We cut off a leg to save for another day, and it still didn't fit very well. Marce had to break out a sewing needle and thread to tie the remaining splayed leg to the body. When it was eventually rotating, it was so unevenly balanced that the heavy end would fall down with a thump every turn, and eventually the rod would come out of its place. In the end, we had to just roast it normally on a tray. Oh well... 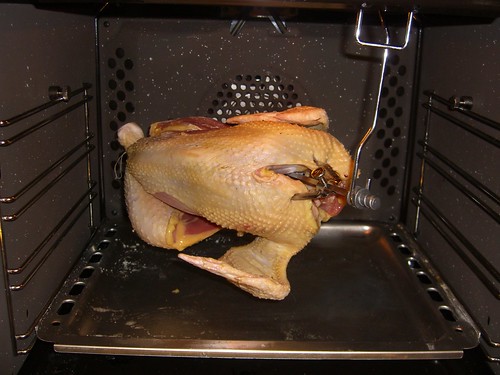 Our work done, Juan and I headed out into the not-very-cold sunny December day to visit some of the bars that Marga and I never go to ("the road less travelled by" and all that). An hour later we got a call from the ladies on my cell and we went to our neighborhood to meet them and have a few more glasses of Rioja with them. In one of the bars, Don Remaes, (where my parents managed to have dinner by themselves during their visit) they had done some remodeling and had this awesome wine rack. 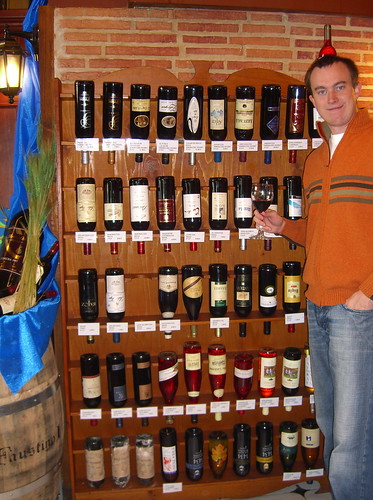 Too bad a bottle was missing. Hey, don't look at me! 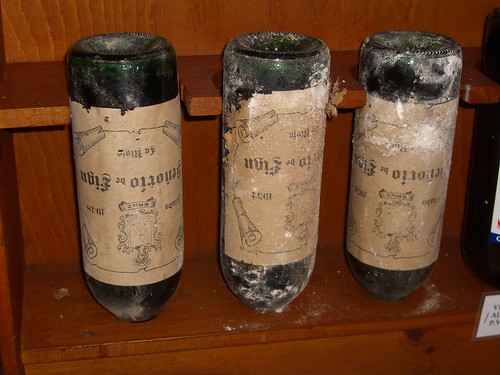 The three bottles on the bottom left of the rack. Check out the dates.

Upon returning home, we had some fantastic roast chicken waiting for us. It's been five hours since we ate, and I'm still very full. 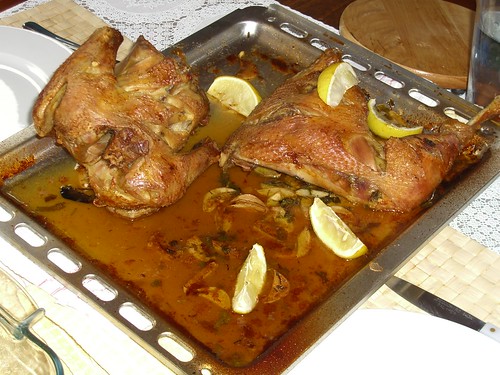 The skin had a wonderful crispiness to it, and the meat was, to use an already-overused adjective, incredibly succulent.

With a belly full of wine and chicken, a siesta was inevitable for me, and when I awoke two hours later, the in-laws had left. When in-laws leave, do they become outlaws?