On Friday, we drove to Vitoria to Marga's orthodontist appointment, did some shopping, and drove to Mondragon. On Saturday, we had a family dinner of wild hare that Grandpa Ramón brought back from his trip to Extremadura for All Saints Day. All the big family dinners, with the exception of those around Christmas time, are held at the Centro Extremeño, where our wedding party will be. 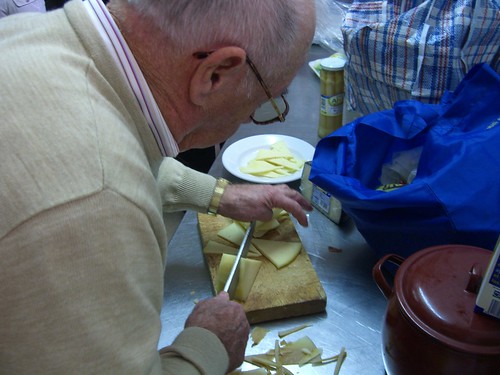 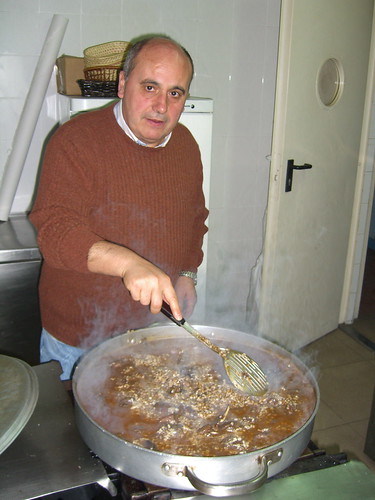 Alejo, a close friend of the family, stirs the main dish, hare with rice. 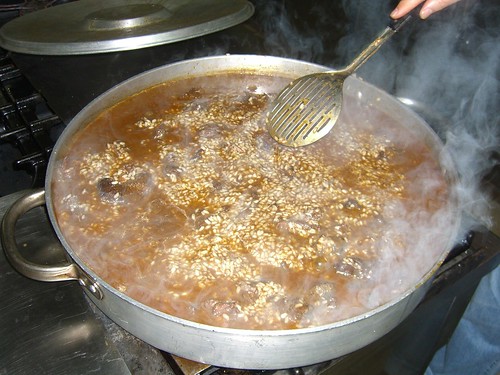 Members of the Centro Extremeño can use the kitchen if they sign up for it. 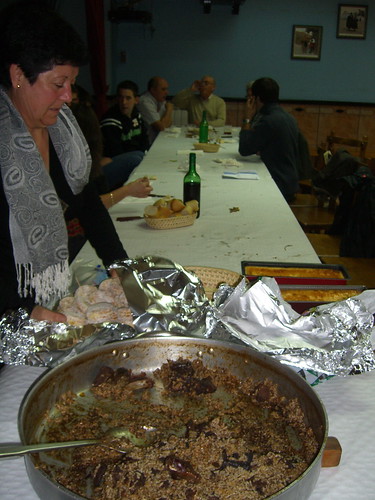 We did quite a bit of damage. Aunt Inés prepares to serve some cookies she made. They were each like two nilla wafers put together oreo-style with cream between them, and then they were covered in coconut shavings. Mmm! 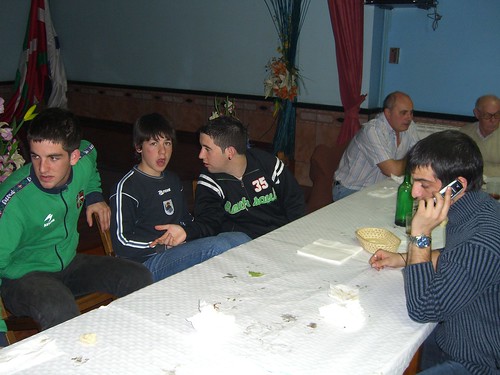 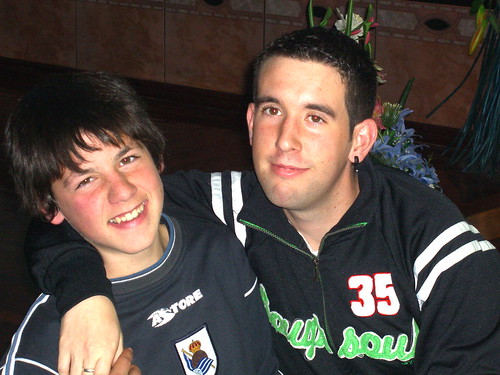 Ion has let his hair grow out, and I must say that it suits him quite well. When he first walked in, I thought, "How strange that Gorka brought a friend to a family dinner!"

Before dinner, I had a marathon conversation with Gorka. It must have lasted all of four minutes, and I probably got 50 or 60 words out of him, thereby more than doubling the total number of words he's ever said to me. We talked about driving tests. He got his license a couple months ago. 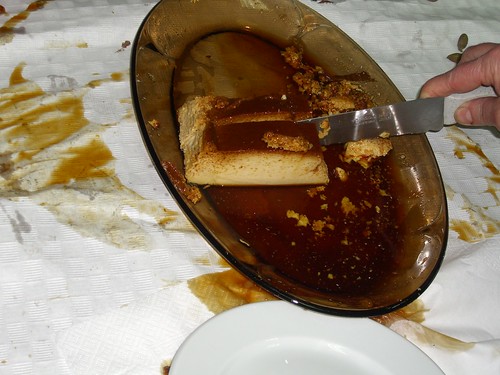 After dinner, the men often retire to a table to play cards. The game is always the same, Cuatrola. The closest American equivalent would be Spades. You play in teams of two, and you have to get as many points as you can for your team for the hand. Point values are assigned to each card by its rank. So if you play an ace and are sure to win the trick, then my best play would be the king, or my highest ranking card in the suit, because then we get the points from your ace and my king, plus whatever cards the opponents throw. When I'm sure you will take the trick, I try to give you my highest card so that it won't be captured by the opponents on some other trick. There is a trump suit on every hand, determined by the first card that the dealer turns over and gives to himself. So when you're dealer, you're guaranteed to have at least one trump. Everyone has five cards dealt to them. Only the highest ranking cards in the deck are used (kind of like pinnacle). The rest of the smaller cards are used to keep score. The only bidding that takes place is that everyone is given the chance to "go solo". If you go solo, your opponent doesn't play that hand, and you have to beat, take more points than, the opponents yourself. And if you have a really strong hand, you can go "cuatrola", in which case the point system goes out the window, and you have to take four of the five tricks yourself. The rewards, and penalties for failure, for the two solo attempts are doubled and quadrupled respectively. It's a very fun game, and I enjoy playing it when I can. 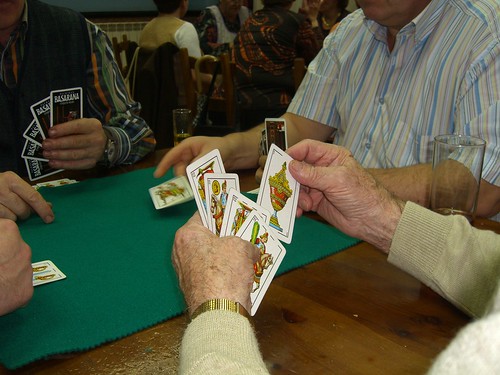 Grandpa plays the "As de copas" (ace of cups). 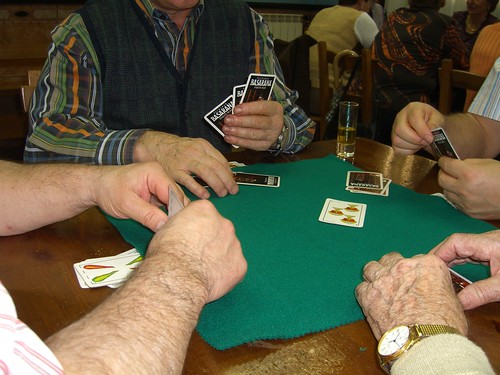 The green felt mat is great for raising the coefficient of kinetic friction of the playing cards.

You may now watch a video of a hand. Note how the dealer, Grandpa, leaves the first card down so that everyone is sure of the trump suit. And then notice the big difference. They deal and play counter-clockwise! As wrong as it may look, as with the Brits driving on the wrong side of the road, you have to admit that it's completely arbitrary. Also notice how, after the hand is over, a card (one of the small, unused cards from the full deck) is taken from the "bank", almost always Juan, and given to his partner, Alejo, because their team won the hand. When your team gets up to twenty of those, you win. But you have to get exactly twenty. You can't go over.