We went to Madrid this weekend, to see a little more of the city and to visit with some friends that we don't get to see very often. Unfortunately, I was pretty lazy about taking my camera around with me. We had the most fun when it was dark out, anyway.

We stayed in a hostel (cheaper than a hotel) for 38€/night ($48/night). That's extremely cheap for a big city. We called them on Wednesday to make our reservations for Friday and Saturday night. The first thing the woman told us was, "The rooms don't have their own bathrooms. They're communal. Do you still want to stay here?" We've stayed in B&B's with communal loos in England, so that didn't scare us much, but it was the way she said it that was a little off-putting. When you're searching for cheap lodging in a city that you know nothing about, there's always some concern that you might end up staying in a hostile hostel. She also said that calling three days in advance was very strange, and that if we didn't call again on Friday afternoon, then she didn't trust us to actually show up. Clearly this woman has been burned before by denying people room at the inn and then having the rooms stay empty.

When we finally got there, we were pretty impressed. If I had to describe the place with only two words, they would be "ornate" and "victorian". There was incredibly elaborate molding all along the high ceilings and doors. The place was very old and creaky, but very clean and tidy. There were three huge bathrooms, with huge bathtubs. All were newly tiled and spotless. There weren't bathrooms on the rooms because it wasn't built to be a hotel. I never once found a bathroom ocupied, and never saw another guest. Our room smelled like stale cigarette smoke, and we were right on top of a nightclub. We didn't hear any music, but all through the night, drunken youngsters would come out of the club and forget that they didn't have to scream at each other over the music anymore. On both Friday and Saturday night, there was a steady raucous out the window from 10pm to 8am (the Spanish party all night). Surprisingly, we slept pretty well. Tourism will do that to you. 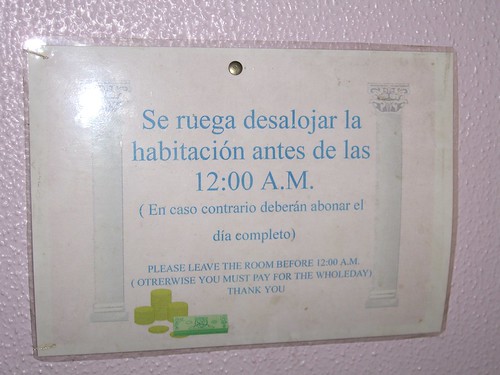 In Spain, as my parents learned, you say "Good morning" as a greeting any time before lunch. And since lunch is usually eaten at 2:30pm or 3:00pm, it's incorrect to say "Good afternoon" to someone at 1:00pm. People will say "One in the morning" and mean 1:00pm. That's why I called the mistake "obviously Spanish".

Incidentally, almost everywhere where you see a time of day written down in Spain (and Europe), it's in 24-hour format. So if this sign had just said "12:00" instead of "12:00 AM", it would have been so much clearer. As with most typos, the meaning here is clear from the context. But that doesn't make it excusable... 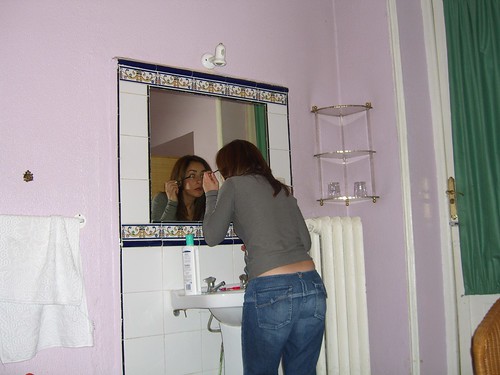 Our room had a nicely tiled sink.