My grandmother, Joyce, has spent this past week in Grand Marais, Minnesota, visiting her son, Neil, and daughter-in-law, Barb. They have asked me to post some pictures and writings about them on my blog. Most of the pictures are double-captioned, by both Barb and Joyce. All the words that follow are theirs. 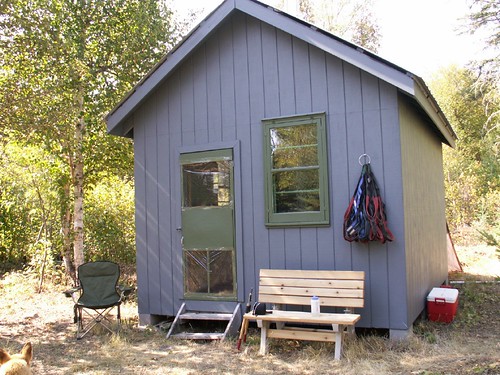 Joyce: We were at Neil and Barbara's cabin in the woods three days and two nights. You can see Neil's good paint job on the cabin. There is a wood shed/storage shed beside the house with solar panels on the roof. There is also a generator at the rear that runs a microwave oven, a gas stove for other cooking, a wood stove for heating, and water on tap which they transport themselves - all the comforts of home. Those are the dogs' harnesses hanging on the cabin wall, and the cooler sitting by the side wall. The bench makes a picnic table.

Barb: The cabin sits on about 45 acres of land. The area is very remote with very few permanent residents. While we were here we saw no one else for the entire time, although we did hear planes and a distant neighbor's truck. The vegetation is a mixture of conifers and birch trees, with lots of alders and brush. The wooded areas are impassable due to deadfalls. One tool that we use constantly is a pair of loppers to cut back the alders and raspberry plants. Joyce got into this activity and we cleared about a half-acre.

We had great fall weather with clear skies and a nice south breeze. At dawn we had temps about 35 F and during the day we had hot 70's.

All of our activity stirred up the neighbors - the ravens, whisky jacks, and squirrels.

We took breaks from lopping with walks to Little Tom Lake and a climb to an overlook with a panoramic view of two counties, Tom Lake, Lake Superior and the Devil Fish fire tower. Neil pointed out all the moose-clipped brush along a very old trail. 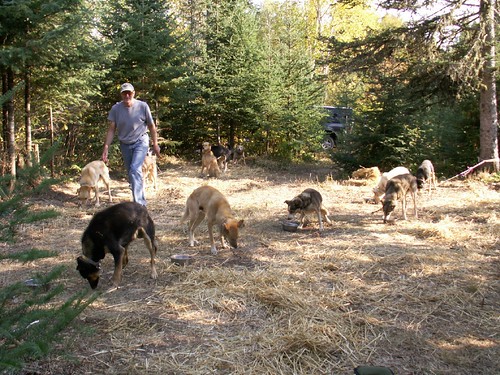 Joyce: In the picture Neil is watering and feeding his twelve sled dogs. They are quite friendly, and they let me pet them. There are two lines of six dogs each on either side of the clearing. This way, when he is going to run the dogs, he lays the line between them with one end attached to the four-wheeler and the other to a tree while he puts on their harnesses and attaches them. Then off they go.

Barb: There is quite a din right before the bowls arrive to each tethered dog. Eating is a favorite activity. Once done, you can hear an occasional burp, especially from Lars. Neil has to carefully adjust the amounts fed to each dog. When they are exercised regularly they lose weight rapidly. In this photo the dogs are on straw. It really smells good and the dogs like to make nests. 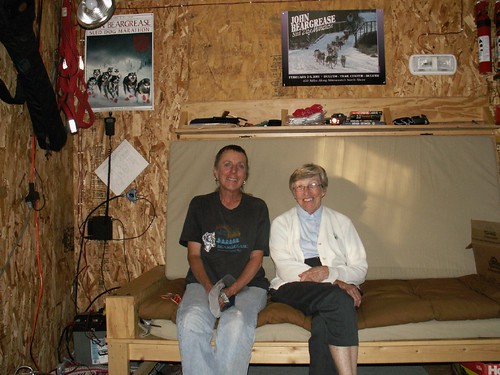 Joyce: This is one corner of the cabin. You can see Neil's banjo, dog harnesses, dog sled posters, Neil's short-wave radio, a shelf with necessities such as the racers' forehead lights which we each had, to make our way to the outhouse. (Incidentally, it has a soft, plushy seat.)

Barb and I are seated on a combination couch-trundle bed, which Neil designed and built. We are seated on one bed, mattress, and sleeping bag while the platform for the second bed is clamped to the wall with its mattress on it-very comfortable. The platform can also slide under the first bed on its supports, if you wish. When assembled as a second bed, the armrests are lifted up, placed on the floor, and become the legs for that bed. I was much impressed!Barb: We slept very soundly on our beds. Neil was up in the loft in his favorite spot. At night the temperatures dropped to the mid-thirties and we both appreciated Neil's starting a wood stove fire way before dawn. Joyce and I both made nightly visits to the outhouse behind the cabin. This does require unzipping the warm sleeping bag, putting on a headlamp, shoes and venturing out into the night. The headlamp light reflects off the dog's eyes - the blue eyes reflect yellow. It is startling to see 24 dots of light in the middle of the night.

The cabin is small but very welcoming - a nice warm, dry room in a vast woods. 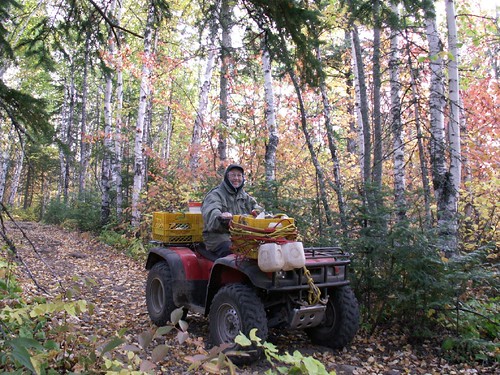 Joyce: After Neil finished running his dogs Wednesday morning, he took me for a ride on his four-wheeler. You can see it was a cool morning with me dressed up in Neil's heavy jacket and cap. We went down to Tom Lake, which we had seen from way up on the rocks on our hike the day before. There is a very large clearing for a heli-pad, which is used to put out forest fires, picking up water from Tom Lake. The whole clearing is surrounded with sprinklers to protect the firefighters. We saw one grouse but were too late to get a picture. The woods are beautiful with red maples starting to turn color, contrasted with the birch trees and the evergreens.

Barb: Joyce did not hesitate at all when Neil invited her to ride the Honda. She had earlier told me that she had been adventuresome as a girl. She still is. The two milk cartons on the front end are used to water the dogs. Neil stops at creeks and deep puddles to collect water that he presents to each dog. I think she looks terrific on the machine. What a nice smile! I am confident that she could handle a 12-dog team with no problem. 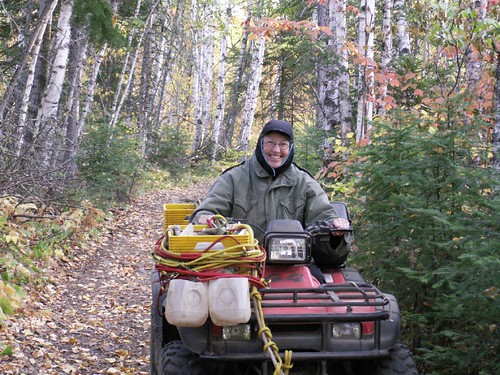 Joyce: This picture shows you again how beautiful the woods is with the changing colors. As you can see, it was a cool morning. I'm wearing one of Neil's heavy coats and hats. I have to admit that I really didn't drive this 4 wheeler. I just wanted you to wonder for a while. I'm having a great time!

Barb: The fall colors are at their peak now. Grouse hunting opens on Saturday. That means the woods will have more travelers searching for birds. With the leaf cover the grouse can still easily disappear into the brush. Joyce has a radiant smile and fits beautifully into the woods. 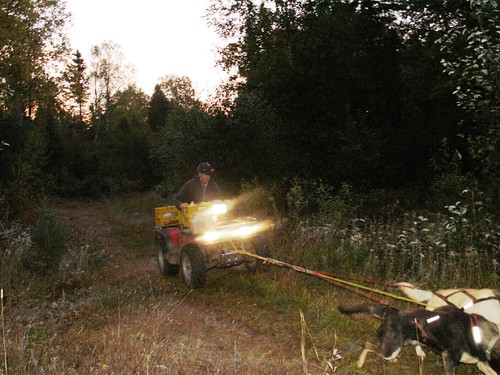 Joyce: I was up when Neil watered and fed the dogs this morning and watched him put on the harnesses. Then I walked to a second entrance to their place so I could take a picture of Neil and all the dogs turning out of their place. It was six o'clock so I used the flash and thought I was ready. They came pretty fast, but I did manage to catch the rear of two of the twelve dogs plus Neil on the four-wheeler. My flash also caught his headlights, but we thought the picture would give you an idea of what its like. I think Neil said that he has the four-wheeler in third gear when they pull so they have to work.

Barb: Neil is never happier than when he is training his dogs. He has the machine tethered to a tree trunk while he hooks up-to keep the team from running without a pilot. Sometimes he has trouble releasing the ropes and just about loses the 4-wheeler-but he always manages to hold on. It was fun to watch Joyce with the dogs. She has a lot of confidence. They all came to accept her as part of the team.