Nothing like a free, anonymous, online photo-sharing site to bring all the creepy folks out of the woodwork. Nine days ago, I posted the following picture to Flickr. 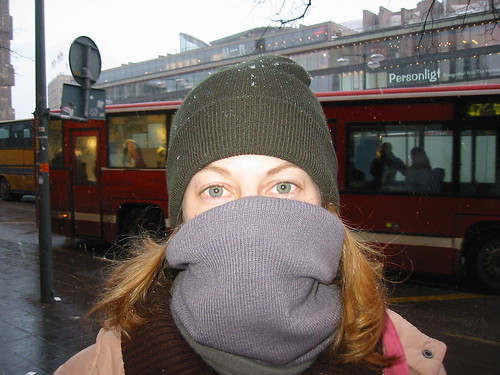 I love this picture because of how clearly the colors of her scarf and hat can be seen in her eyes.

This is a girl that went in our group of seven to Stockholm in February, 2005. I didn't really know her then, and I still don't. She's a friend of a friend.

In the world of Flickr, you can leave comments on other people's photos, and you can mark photos as your "favorites", etc. One day after posting this photo, someone named m_s_l marked it as their favorite. I just noticed today. So I clicked on her to go see m_s_l's pictures, and this is what I find:

Looks like she's a wannabe Muslim or something. And as if that's not strange enough, there's this guy, called ferrari_nice, that's been leaving comments like these on m_s_l's photos:

OMG Im in love w/ this gorgeous hot pic girls I loveee your scarf wrapped around all over your face....

Mmmmmmmmmmmmmmmmm everything is soo gorgeous..... you looks adorable..so pretty I love the colors, all wrapped.........

And ferrari_nice isn't the least creepy guy I've ever seen either. 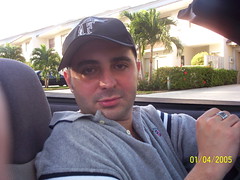 So there you have it. I posted a random, extemporaneous photo that I took of someone that I hardly know, and I ended up looking at pictures of a Nascar-loving Floridian1 with a serious scarf fetish.

1Don't you love the tragic irony of a guy in the warmest continental state with a scarf fetish?