Last night, one of the biggest pop bands in all of Spain came to our little town of Colindres. The band is called Estopa, and is mainly composed of two brothers from Barcelona. My feeling towards Estopa is that they are okaaaay, but not great. The main thing that annoys me about them is that there is at least one big time signature change in every song! You can't tap your foot to the rhythm of the song from the beginning to the end, you have to stop and adjust to the new tempo. While this is an okay gimmick to have in 10% or 20% of your songs, it's not okay to do it in every one.

That said, I enjoyed the concert, and I would probably do it again, despite the $27 ticket price.

We were quite close to the enormous stage, which was set up in the municipal soccer field. I was concerned that it might be too loud, to the point where the sound gets distorted (I've seen that happen in other concerts here), but it turned out that the music was too soft! So soft that it was hard to hear the singers over the shouting crowd. For the first few songs, there was a girl behind me shouting every lyric into my ear with terrible pitch. However, she went away eventually and the rest of the concert sounded pretty good.

The lead singer, the brother with no guitar skills, was quite possibly the least charismatic stage performer I've ever seen. Imagine a singer that doesn't play an instrument and has the dancing skills of a marionette in the hands of a 4-year-old. It was pretty sad. 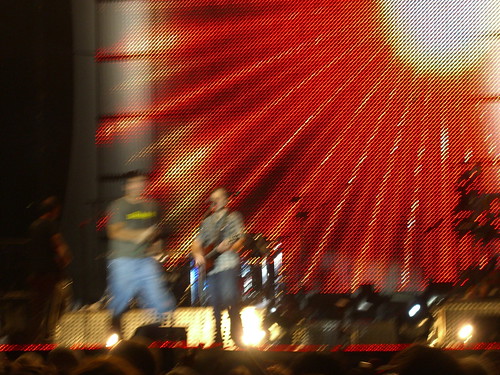 My camera (or the operator) isn't very good at taking pictures in concert lighting.

You can clearly hear the crowd singing. Check out those dancing skills!

For the encore, he came out wearing a Colindres t-shirt.

Earlier yesterday, we had to go to nearby Santoña to deliver something for Marga's work. From the moving car, I snapped this picture of the tide coming into the sound. 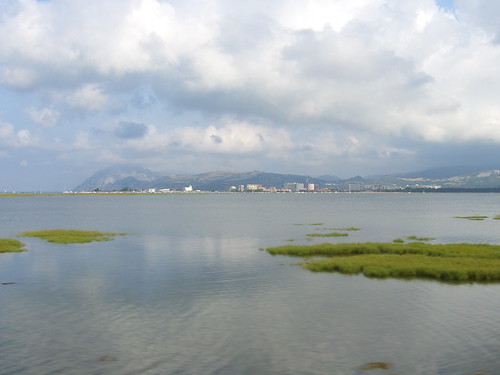