As I've mentioned before, this past weekend was a big San Juan festival in Colindres. There was a bonfire, an exhibition of dance from the local dance academy (where we go for ballroom dancing classes), a concert by a double of the nationally famous pop star, David Bisbal, and a celebration in the park with free stew, oxen racing, and broom and beret throwing competitions. Marga had to work over 12 hours on Friday, so we decided to watch the bonfire from our perfect bedroom vantage point. 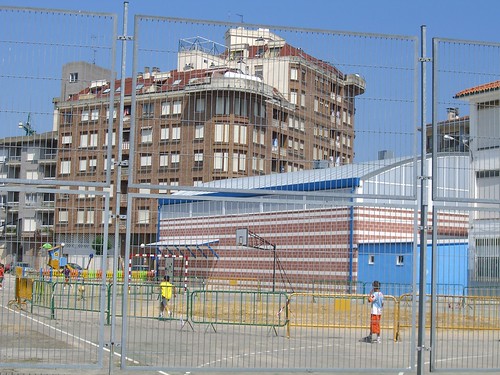 I took this on Friday afternoon, looking up at our house from behind the playground where the fire would be. The sand and barriers were already prepared for the bonfire. 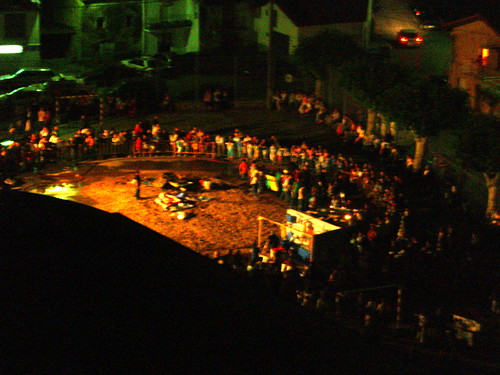 They bring in the decorated floats that had been paraded around town.

The floats are positioned for judging. You can hear what a festive atmosphere it was. 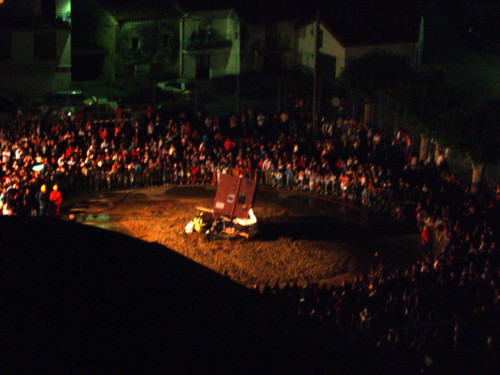 After twenty minutes of boring, can't-be-understood-because-the-mic-is-so-terrible poetic speeches, the floats are placed upon the pyre.

The fire is lit by the firemen. 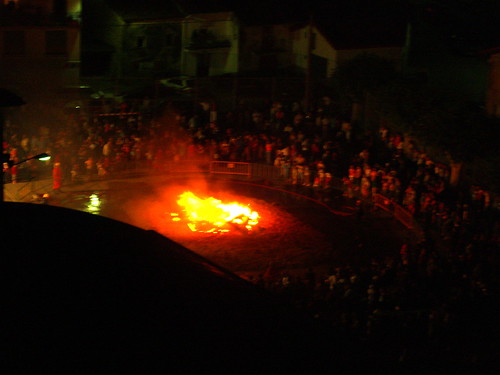 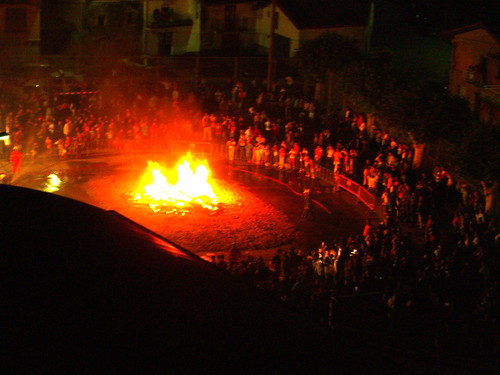 Overall, I was a little disappointed in the bonfire. It was much more controlled than last year, which made it safer, but also a lot less exciting. Last year, there were sparks jumping to nearby trees and people running away from the fire to avoid the heat. There was none of that this year. Everyone knows that at least half the fun of bonfires is the danger involved!

The following day we went to the park to get free food. They served a local Cantabrian dish, called "Cocido Montañés", which I would translate as "Mountain Stew". It's a bean-based soup with chunks of chorizo and morcilla thrown in. I love it. 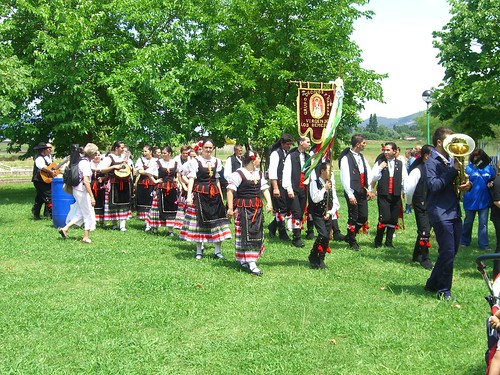 For some reason, there was a dance troupe from Extremadura. 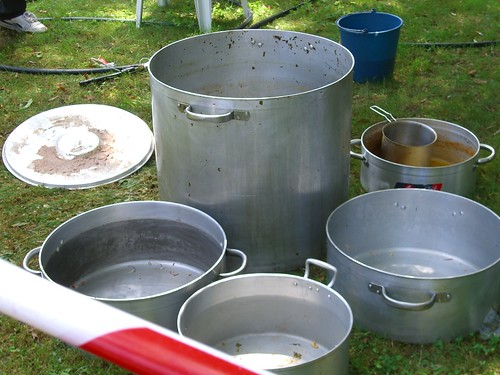 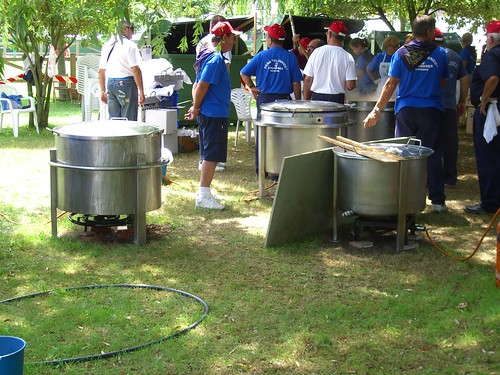 Somehow, they made it work. The food was delicious. 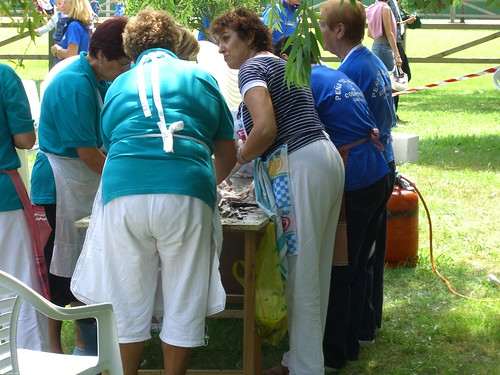 Chopping up sausages to throw in the stew. 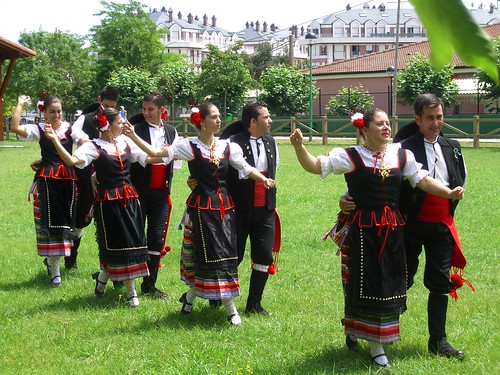 Marga used to dance these dances from Extremadura. 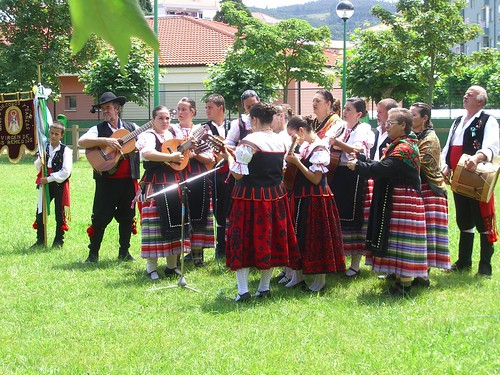 The band. Yes, those are lutes. 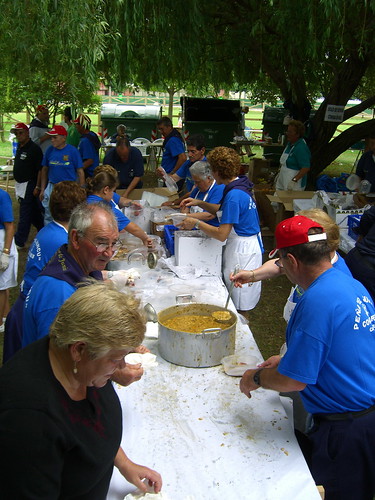 In previous years, they served you into whatever bowl or tupperware container that you brought. This resulted in people bringing big pots and having them filled, and the folks at the end of the line got none. This year they got smart and decided to serve it in little plastic containers. Not only did this limit the serving size, but it made an assembly-line serving system possible. The person that gave you your plastic spoons didn't also have to be holding a ladle. 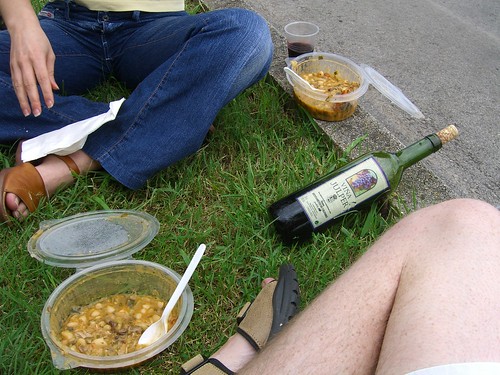 Lots of people brought lawn chairs and foldable picnic tables. Other people brought blankets to put on the ground. We sat on the grass. They were selling wine for one euro ($1.25) per bottle. 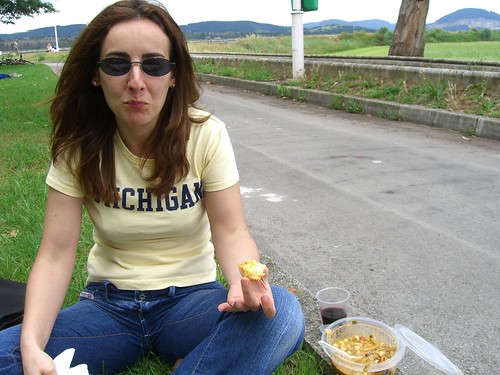 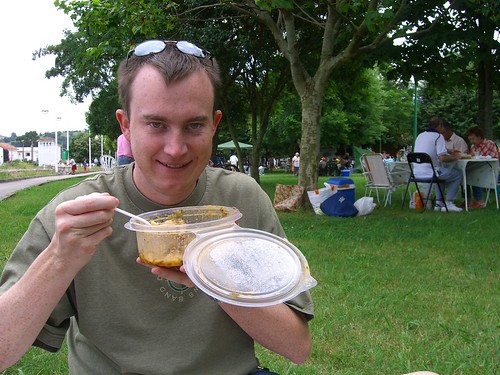 After lunch, we stopped by the serving line to ask for two more servings for Monday's lunch (hey, everyone had been served already), and we walked home to store our stew and snooze on the couch for an hour. 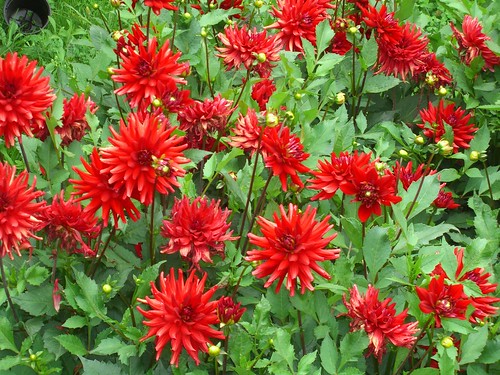 On the way, we found these lovely flowers in someone's yard. If you know what these are, post a comment. 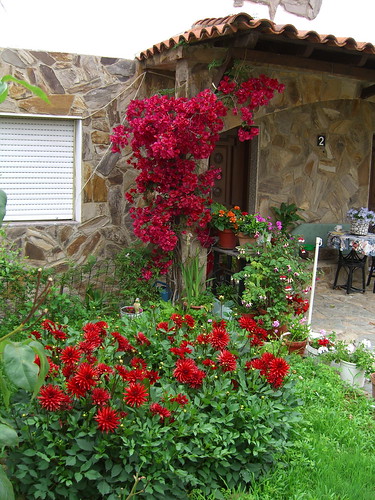 These folks must spend several hours per week in the garden.

After a brief rest, we headed back to the park for the ox dragging ("arrastre de bueyes") competition. On a side note, the verb they use for what these oxen are doing ("arrastrar" = "to drag") is the same one used for "pulling trump" in card games. 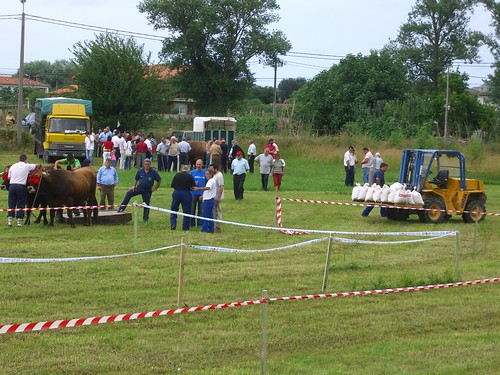 The forklift bringing over the sandbags. We've learned that when they say that something will start at 4:30 PM, they mean that the people performing will start preparing at 4:30 PM and the event will actually start closer to 5:15 PM. 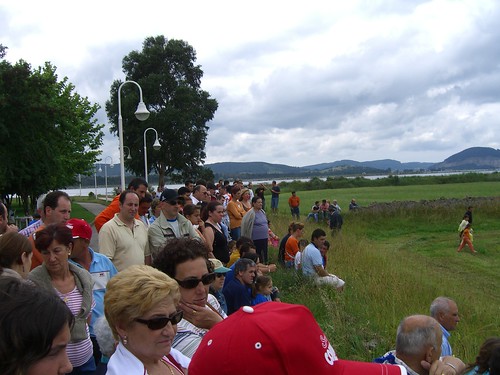 Spectators line the Maritime Walkway to watch the event. 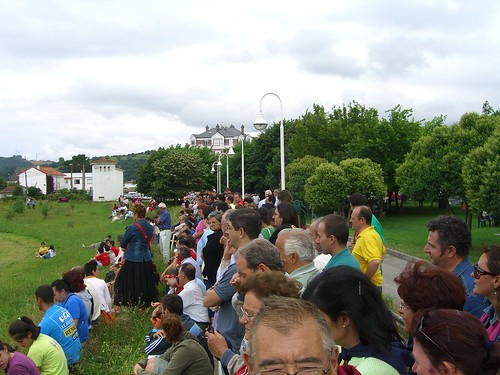 These "ox dragging" competitions, according to a nearby spectator, are common in the surrounding towns, but this is the first year that Colindres has had one. 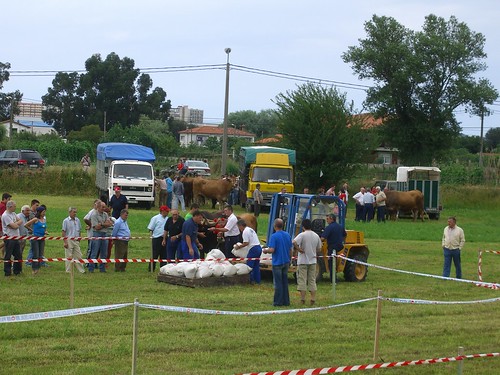 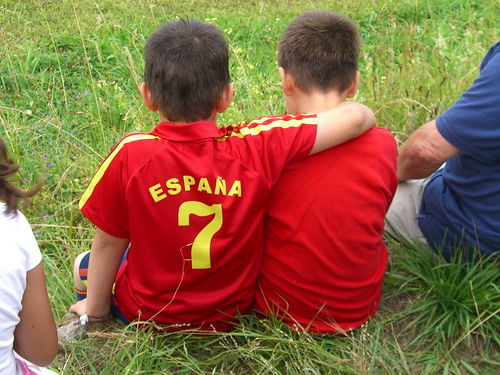 I thought these two looked cute. Number seven couldn't talk his friend into going any closer to the oxen. 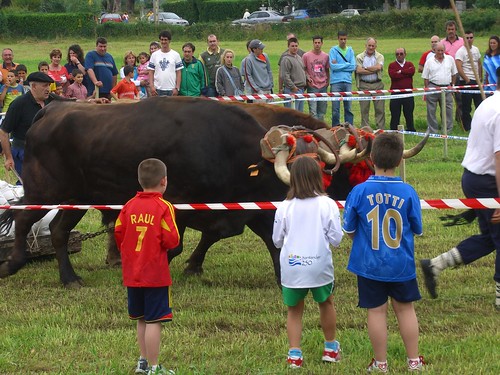 Spanish and Italian soccer stars Raul and Totti watch the beasts struggle to drag the pallate around the ring. You had to do as many laps as you could in 12 minutes. 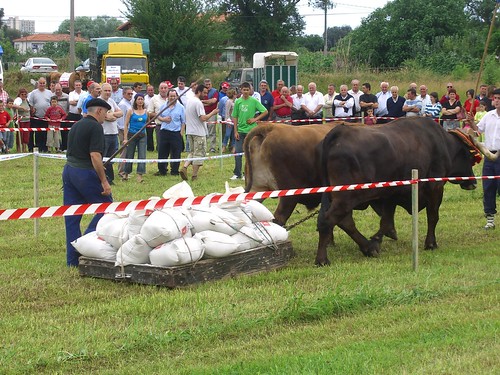 The oxen were prodded along by men with long canes.

After watching cows run around in circles for a bit, we thought we'd go watch something more highbrow: the broom throwing competition! 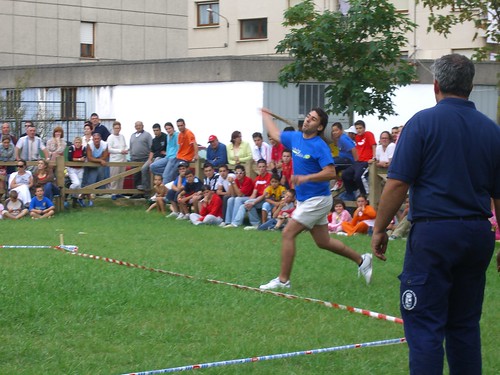 Contrary to what you might think, you're much better off "slingling" a broom than throwing it javelin-style. 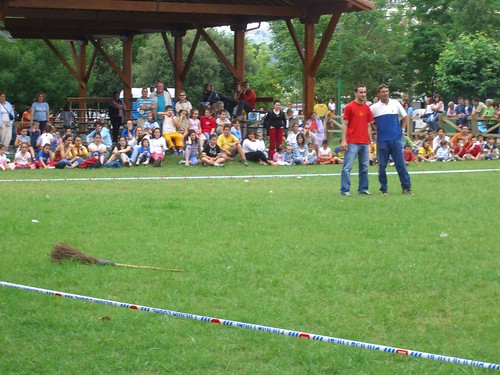 Not a bad effort. 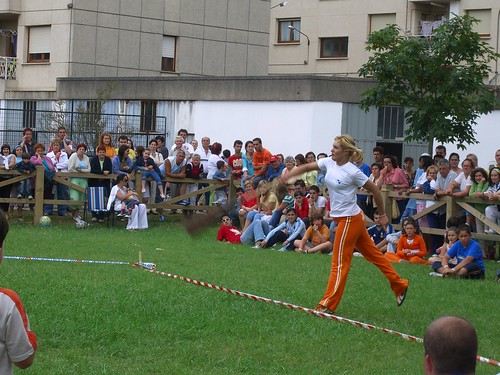 There was a women's competition as well (with shorter brooms), prompting witch jokes from the crowd. The most popular men's throwing style was a spinning discus-style throw. The women chose a rotating shoulder fast-softball-style throw. I wish I could say that the "girls can't throw" stereotype was shattered, but it wasn't at all.

Following the broom throwing, there was a beret tossing competition for children under the age of 12. 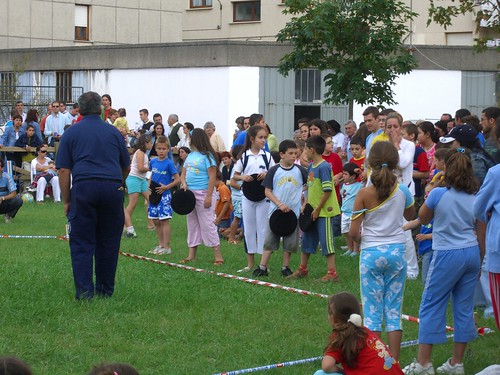 We only stayed for a few rounds. I was impressed that I didn't see any tears. 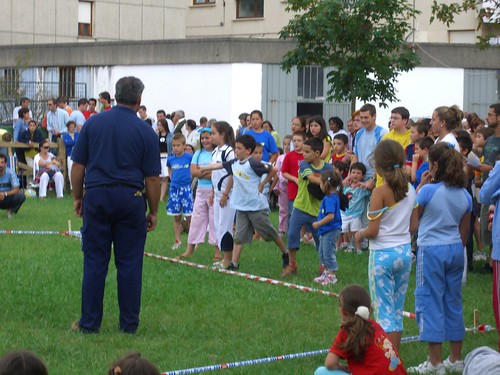 Obviously, the big kids did the best.

And thus concluded the San Juan festivities here in Colindres. It was a great example of a small town, with a little organization, having a lot of fun doing very simple things. It felt like the kind of thing that Europeans from 600 years ago might find familiar: fires, competitions involving domesticated animals, and throwing strange objects. I enjoyed it.