Well, we've survived to another solstice, today is the longest day of the year, and some of the warmest days of the year are in the near future. Sounds like a good enough reason to celebrate! As is common throughout Europe, our town will celebrate with a huge bonfire to scare off the witches (that's a fascinating link).

In Colindres, they make little 6 ft x 6 ft parade floats with little miniature buildings and scenes on them. They are really beautifully done, and look like they must have taken a long time to make. These floats are paraded around town by the groups of 5 or 6 people that made them, all similarly dressed. The parade ends at a school playground where the bonfire is. The groups take turns with a microphone reciting poetry that lists complaints that they have against the town hall and the mayor's broken promises, etc. The teams are then judged by a panel of judges for both their floats and their rhyming complaints. I think there's a small cash prize for the winners. Then, all the floats are piled on top of the pile of wood, gasoline added, and the fire lit. There are firemen standing by to hose down nearby trees. Last year, the flames went 40 feet into the air and it was unbearable to stand less than 50 feet from the fire.

When we followed the parade around town and eventually to the schoolyard last year, it was in a neighborhood that we had never been to. Well, it turns out that that's the neighborhood where we bought our house, and the playground is the one seen from several of our windows!

Here, you can see that they are already preparing for the bonfire that will occur at midnight on Friday night. 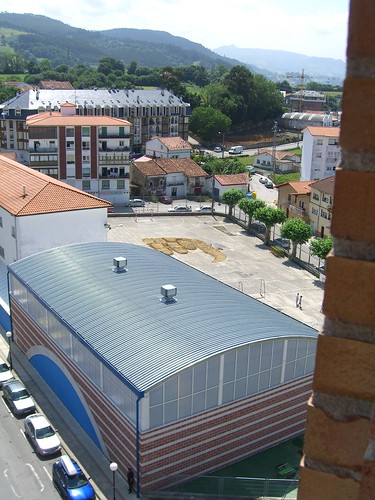 Looking over the school's gymnasium 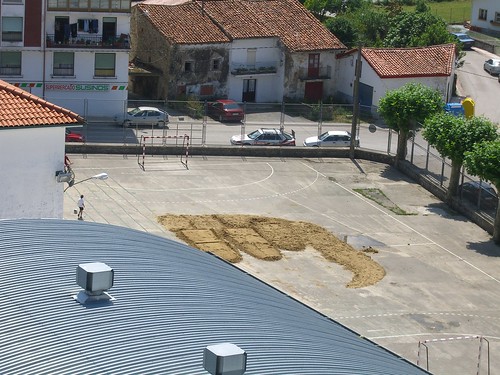 Presumably they will complete the sand square later today.

Oh, and the festival is called San Juanes because the Christians hijacked the existing pagan midsummer holiday. It's a big day here, because Saint John the Baptist is the town saint. He's got a church here.